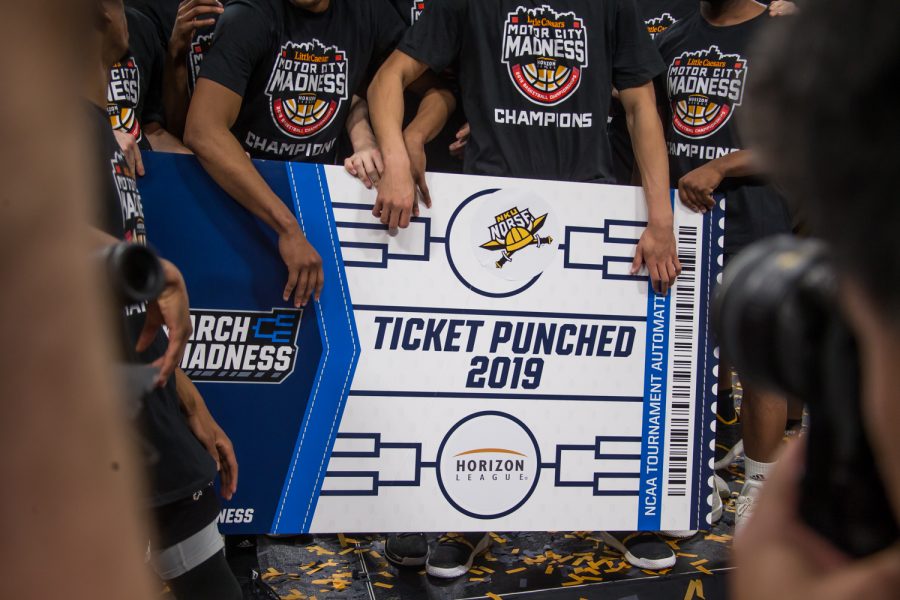 NKU players hold the sign showing their inclusion in the NCAA Basketball Tournament. NKU defeated Wright State during the final round of the Horizon League Tournament 77-66.

Wait—why is the basketball team going dancing? Who says Northern Kentucky is in the “West”? Are we really playing in Oklahoma?

NKU is set for its second March Madness in three seasons this Friday, but if you’re not a regular college hoops fan, you probably have some questions before the first-round game.

Who will NKU play in the first round of March Madness?

NKU, a 14-seed, will play the 3-seed Texas Tech Red Raiders on March 22 at 1:30 p.m. That match will be played  in Tulsa’s Bank of Oklahoma Center, but you can find the game on TNT and streaming on fuboTV.

Seeds are ranks for teams based on season performance, difficulty of schedule and other factors. There are 16 teams to a region, so the Norse rank near the bottom of the West.

It’s one step up from their last appearance in the 2017 tournament, where the Norse (then a 15-seed) faced the then 2-seed Kentucky Wildcats. Kentucky advanced after defeating the Norse 79-70.

But seeds are not the ultimate indicator of team success. Overall, 21 14-seeded teams have defeated a 3-seed to advance to the second round; two 14-seeds have advanced to the Sweet Sixteen (Chattanooga beat Illinois in 1997 and Cleveland State beat St. Joseph’s in 1986).

No 14-seed has advanced past the Sweet Sixteen, let alone an NCAA national championship.

Who determines the seeds?

That’s the 10-person NCAA Selection Committee, made up of administrators and coaches elected to set terms.

The seeds also determine how hard the first matches are for highly-ranked teams, so in theory, the best teams are rewarded with an easy first round. The 1-seeds play the 16-seeds, 2-seeds play the 15-seeds, and so on.

First, Arizona State and St. John’s square up in a First Four match on March 20. The winner of that game plays the 6-seed Buffalo, and the winner of that match plays NKU in the second round.

The match between Buffalo and Arizona State/St. John’s is set for March 22 at 3:50 p.m. on TNT and fuboTV, immediately following the NKU v. Texas Tech match.

If the Norse make it to the second round (which would be the farthest NKU has ever made it in the tournament), they would play again in Tulsa on March 24.

Why is NKU in the ‘West’ region?

Placing NKU in the West was a move that defied early projections, which had the team set in the South or Midwest regions. In 2017, the Norse were placed in the South region.

The NCAA Selection Committee assigns each team a region in the tournament based loosely on geography, as well as quality of the team and of other teams in the region.

‘Dancing?’ ‘Cinderella?’ What are they talking about?

There are a few terms sportscasters, players and coaches use to describe the game that might be unfamiliar to casual fans.

The tournament itself is known as the “Big Dance,” so a team who receives a tournament bid is “going dancing.” The NCAA Tournament has been called March Madness since 1939 because—well, take a guess.

“Cinderella” refers to a team that performs far beyond expectations (that could be NKU). A “bracket buster” or “spoiler” often follows the nickname, especially when a Final Four favorite gets knocked out (or spoiled) by an unlikely, low-seeded team.

What is March Madness?

Officially known as the NCAA Men’s Basketball Tournament, it’s seven rounds of games that narrow 68 teams down to the Sweet Sixteen, Elite Eight, Final Four and the NCAA Championship.

Thirty-two conferences receive automatic bids, which they award to teams that win league championships. NKU received its automatic bid after they won the Horizon League Championship against Wright State on March 12.

The NCAA Tournament turns 80 years old in 2019, growing from an 8-team single-elimination tournament and to a nationwide phenomenon that includes 68 college teams.