March Madness: “Christmas for any fan” 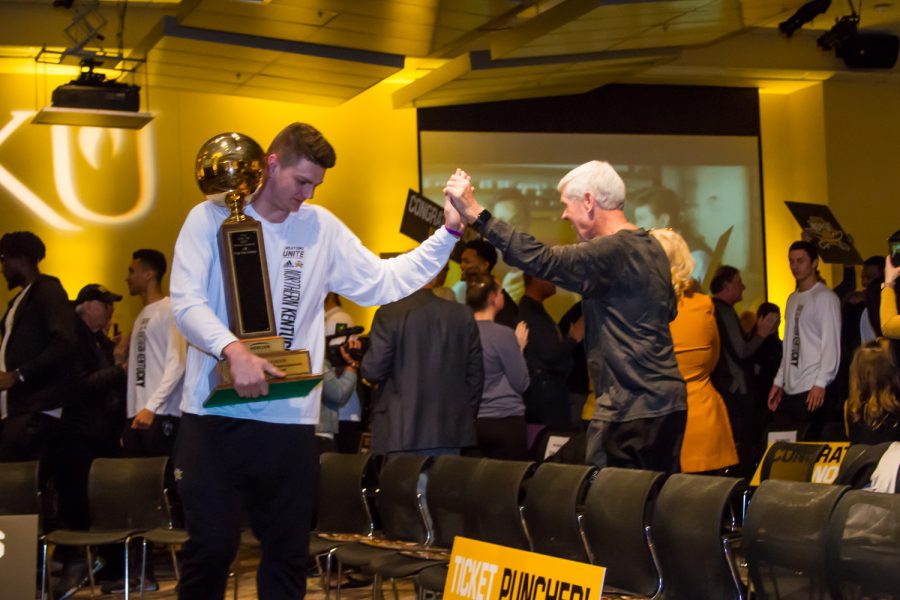 Alumni Hall of the Votruba Student Union alumni, students, and community members mingling around snacks and drinks as they wait for the doors to open. Down the hall of the main floor in the SU the Horizon League tournament trophies are on display with fans taking pictures.  Alumni Association hands out pom poms to those in Black and Gold. The NKU Bookstore has Horizon League Championship shirts for sale for everyone.

The doors are now open to the public, people pour in to find their seat for the show. The Michigan vs. Michigan State game is on to keep anxious fans occupied.

Kyle Craven, an NKU alumni and a co-administrator of NKU Norse Official Fan Page discussed how much the team and fan base has grown over the few years of NKU’s Division I eligibility.

“The first year we were [Division I], I worked with the athletics department as an intern,” Craven said. “And it was so hard to get people to give a crap and I never ever thought that we would even be where we are now from a fan perspective. It’s huge… and it’s just, it’s inspiring. It’s amazing. It makes me just such a proud alumni.”

Craven admires the talent and drive of the NKU men’s basketball team making it to the NCAA Tournament twice in three years.

“From a talent perspective, I mean, I don’t care who you are nobody… would say that three years ago, we’d be in the tournament twice. It’s an incredible feat to accomplish for any program that comes from a one bid league like the Horizon League.”

“What’s really special about March Madness is that school pride that you see,” Ashley said. “And social media has been huge for that. So, just in the past couple of weeks, I’ve seen a huge uptick in people talking about NKU on social media. So I encourage our alumni, to not only talk about athletics, but also talk about what else that they’re prideful about the university.”

The crowd made their way to their seats to cheer on the Norse as they walked into the ballroom. Senior forward Drew McDonald led the way with the Horizon League trophy in tow, with sophomore forward Jalen Tate carrying NKU’s championship trophy.

President Ashish Vaidya opened the floor with how great the team and coaching staff are to the NKU community.

“I just want you to know that you’ve made us all very proud,” Vaidya said. “It’s not just what you do on the court, but what you do outside the court as well. … Running a program of this caliber with this integrity in these times is an extremely difficult thing. And I’m so proud of our young men for doing such a great job. Of course, a big part of that goes to our great coaching staff and everyone else who helps them.”

Head Coach John Brannen followed with how grateful he is to coach not only a history making team, but a team with great character. He brags about how much fun he has coaching and being around the team.

“What everyone here doesn’t understand is the pleasure to be around these guys each and every day,” Brannen said.” …you want to ‘em at your house, you want them around your family, you want them out in public with you these guys represent this university, this region, this community, this brand like I’ve never seen before.”

Brannen urged everyone to stand up and give the team a standing ovation, and Norse Nation did just that. With the end of the speech, it was time for Selection Sunday to truly begin.

The Selection Sunday show began on CBS, and the tension and excitement in the room began to rise as Greg Gumbel began to name the teams playing in the East region.

“One of the youngest teams in the NCAA tournament…” was mentioned on the screen and rumbles of excitement began, only to realize that the announcer was talking about the Belmont Bruins.

As fans started to realize NKU will not be in the East region, chatter buzzed through the ballroom.

The South region was announced next. The anticipation built as they go down the list. The Tennessee Volunteers were named as a number two seed and buzz began to build in the room in anticipation that the Norse may face them. The 15-seed Colgate University is announced and the room seems to release their breath.

The Midwest region began and fans are becoming more and more anxious. The University of Kentucky is announced and the room seemed to hold their breath collectively. It’s announced they will play the 15 seed Abilene Christian Wildcats and the ballroom erupts with excitement.

It’s the last region to be named, the West. The announcers began naming the teams and with each match up the anticipation grew. Marquette takes on Murray State, Florida State versus Vermont.

Then, one of the final announcements: Texas Tech will take on 14 seed Northern Kentucky. The ballroom roared with cheers from the crowd.

For Norse players, coaches and fans, anticipation of the first round could only be described one way: like Christmas.

“It was fun, my heart was beating the whole time,” McDonald said. “It was exciting just to see where we’re going to land who we’re going to play against. This is like Christmas for any basketball fan, Selection Sunday, so it was just great that we got to experience it.”

Just five days from the game, Tate has confidence the Norse will prevail in the Texas Tech matchup.

“As much as we have been through this year with all the adversity, if  anybody can this group can,” Tate said. “You know the camaraderie, togetherness we play with and how far we play, you know the coaching staff is going to come in with a great plan… and we’re going to try to go out execute that.”

Freshman guard Trevon Faulkner, who has proven himself an impact player for the team, described the match as a childhood dream come true.

“It’s a blessing everybody at home that is sending me texts,” Faulkner said. “As a kid, I always grew up wanting to play in the NCAA tournament and it just feels great playing with this team.”

NKU will face Texas Tech Friday, March 22 at the BOK Center in Tulsa, OK. Tip off is set for 1:30 p.m. and will be broadcasted on TNT.