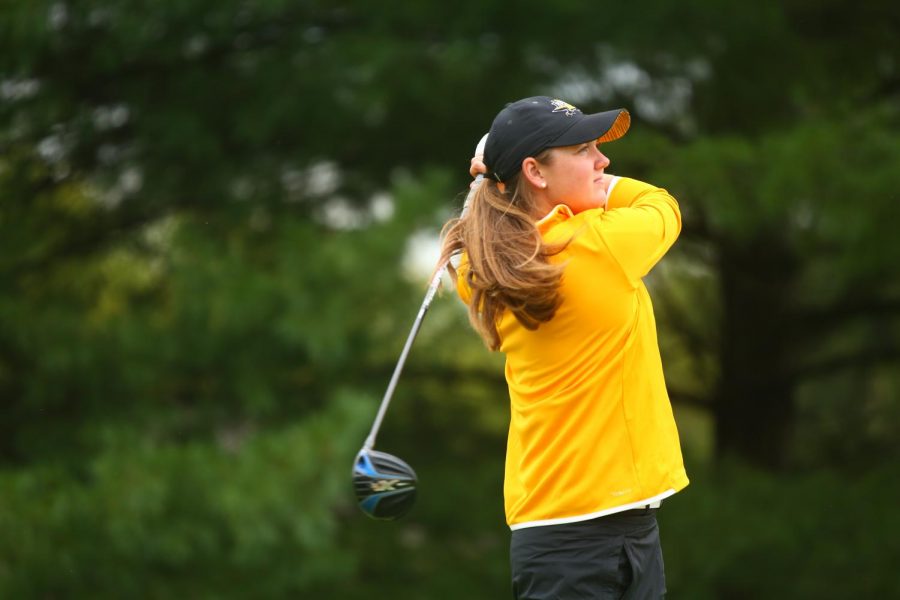 ‘Perfect athlete’: A Norse golfer’s integrity on the green

Macy Wright was born into the world of golf. Her parents and grandparents have been playing her entire life, and her older brother played at NKU.

She started playing competitively in the sixth grade.

“It was kind of just a ‘try it out, see if you enjoy it’ and I did, so I’ve been playing ever since,” Wright said.

When recruiting came around, Wright was torn with playing basketball or golf.

“I knew I was either going to play golf or basketball. I think my junior year of high school, a switch kind of flipped and I realized that I had a bigger passion for golf,” Wright said.

In her time as a Norse, Wright has made quite a big impact both on and off the golf course. One of the biggest impacts she’s made is on her Head Coach Daryl Landrum.

“She is about pretty close to being the perfect student athlete,” Landrum said. “She’s the first one to practice. The last one [to leave]. She’s a good role model. Everything that they’re supposed to do, she does it. She doesn’t skip things, if she’s supposed to hit 100 putts, she hits 100 putts. She makes sure she goes the extra mile on everything.”

When it comes to golf, there’s no denying that she leaves everything out on the course.

According to Wright, she credits her success comes from the support that her family gives her.

“Just knowing that I always have their support and that they’re going to support me at the end of the day gets me through some tough rounds.”

Two people that mean a lot to Wright are her grandparents, Ed and Jo Burton. Between Wright and her brother, the Burtons’ have only missed attending a total of about three tournaments.

For her grandparents, no distance is too great to support their grandchildren in the things that they love.

“We’ve been to tournaments as far north as Wisconsin, as far south as Florida and as far west as Arizona,” Ed Burton said.

Ed went on to say that one of his favorite things about watching Wright play golf is how she carries herself on the course, calling her a “lady on the golf course.”

He then explains that when she has a bad shot, she doesn’t take it out on the course by throwing her club or yelling; she stays calm and does better on the next round.

As Wright reaches the end of her senior year at NKU, Landrum has had time to reflect on Wright and the person that she is becoming.

“I know that she always does the right thing whether it’s in life or on the golf course,” Landrum said.

Ed Burton reflected on Wright’s NKU career and mentions that she’s going to miss the overall atmosphere, but he looks forward to seeing where Wright will go from here.

“I just want to thank basically anybody that has had an impact on my golf and school career,” Wright said.