Preview: NKU hosts No. 2 in the Horizon League 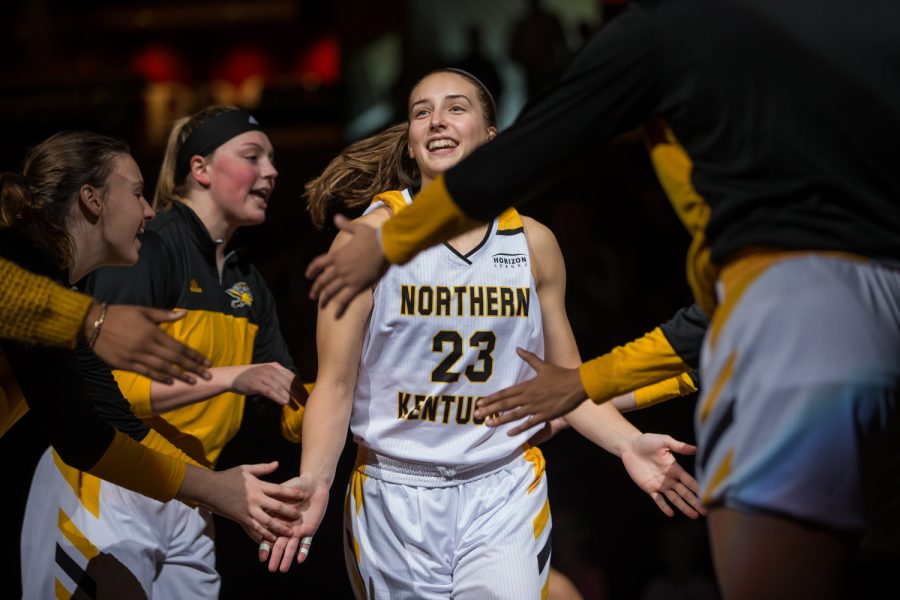 Kailey Coffey (23) is introduced prior to the game against University of Pikeville.

The NKU women’s basketball team, currently seventh  in the Horizon League, takes on the second-place Youngstown State Penguins on Friday, Feb. 22. The Norse sit at 7-17 overall and 6-8 in the conference, while the Penguins are 20-6 on the season with a 12-3 conference record.

This game will be a battle of the boards; in their last meeting, Youngstown out-rebounded the Norse 33-24. The Norse currently sit fourth in offensive rebounding with an average of 11.8 rebounds per game, while the Penguins sit at seventh with a 10.4 average per game. The Penguins sit atop the league in defensive rebounding, averaging 29.2 a game.

The last clash between the two teams ended in a 66-77 loss for the Norse. For Youngstown State, 6’3″ junior forward Mary Dunn led the night in scoring with 23 points and 11 rebounds. Dunn is fifth in the Horizon League in scoring with an average of 13.5 points per game.

Sophomore forward Kailey Coffey led for the Norse with 19 points and six rebounds in their last match up. Coffey is fourth in the Horizon League in rebounding with an average of 8 boards per game.

Last game, the Penguins out scored the Norse in the paint 30-26. The Penguins are first in the league in field goal percentage with 42.5 percent. The Norse sit at seventh with 37.1 percent.

This game is crucial for both sides. For the Norse, a win here could move them up to sixth in the league. For the Penguins, this win could place them first in the Horizon League.

Youngstown is the first tilt of the weekend for the Norse. The match is set for 7 p.m., and the game will be broadcasted on ESPN+.