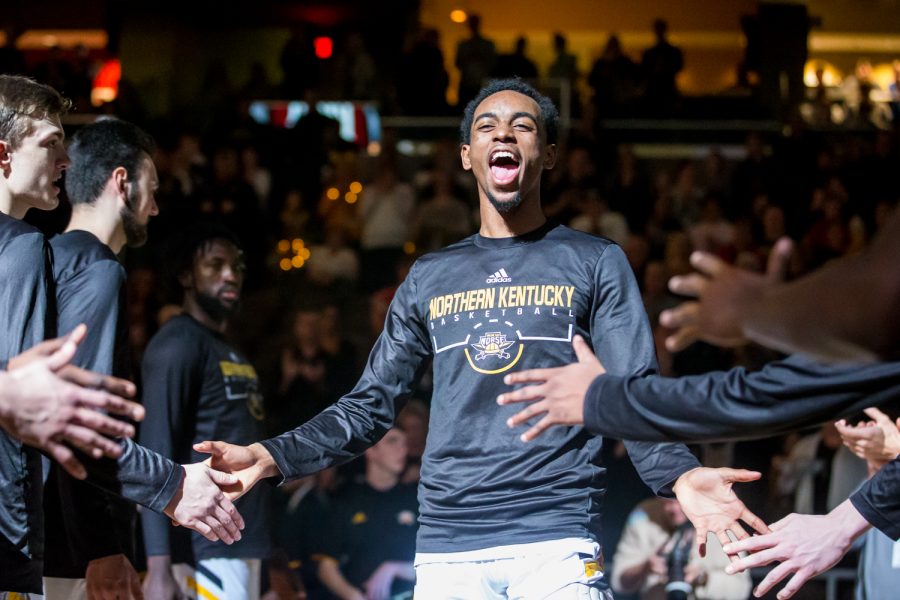 Jalen Tate (11) is introduced before the homecoming game against Oakland. The Norse defeated Oakland 79-64.

The last time the Norse clashed with the Wright State Raiders, they narrowly achieved victory with a score of 68-64.

On Friday, NKU men’s basketball team is poised to take on Wright State at Nutter Center Friday, Feb. 15, set for a late tip at 9 p.m. and streaming live on ESPN U.

The Norse trail all-time against Wright State at 23-11, but since the Division I transition the series is tied at 4-4. With the Raiders just a game under NKU in Horizon League standings, holding a 9-4 record, this game is imperative for the Norse to win. According to ESPN’s Basketball Power Index, NKU has a 54.7 percent chance of taking home the win.

Since their last meeting at BB&T Arena on Jan. 11, Wright State went on to win seven out of their eight last played games and NKU has won six out of their eight. Of those games, senior center Drew McDonald, who led the Norse in the last Wright State matchup with 22 points, has averaged 19.5 points. Junior guard Tyler Sharpe followed in the game with 14 points and has averaged 15.1 points since.

The top scorer for the Raiders was sophomore center Loudon Love with 16 points; in the eight-game span Love has averaged 17.1 points. Senior guard Mark Hughes followed with 14 points and has since averaged 9 points per game.

NKU sits atop the Horizon League in team-wide field goal percentage with 48 percent, and just second under Green Bay for scoring, averaging 79.6 points per game on the season. NKU holds opponents on average to 67.3 points, while Wright State is just under the Norse holding their opponents to 68.4 points a game on average.

NKU has received national attention from ESPN’s Joe Lunardi, who predicts that NKU will make it to the first round of the NCAA Men’s basketball tournament. No other team in the Horizon League has received such predictions this season.

The team is coming off a 79-64 homecoming victory over the Oakland Grizzlies with four Norse players scoring in the double-digits.

The Office of Student Engagement has made a bus available for NKU students to pay $5 to go support the Norse. Wright State plans to have a black out for the game, so in true rival spirit, NKU Athletics has advised everyone to join the #GoldRush and wear gold in support of the Norse. This battle will be broadcasted on ESPNU.