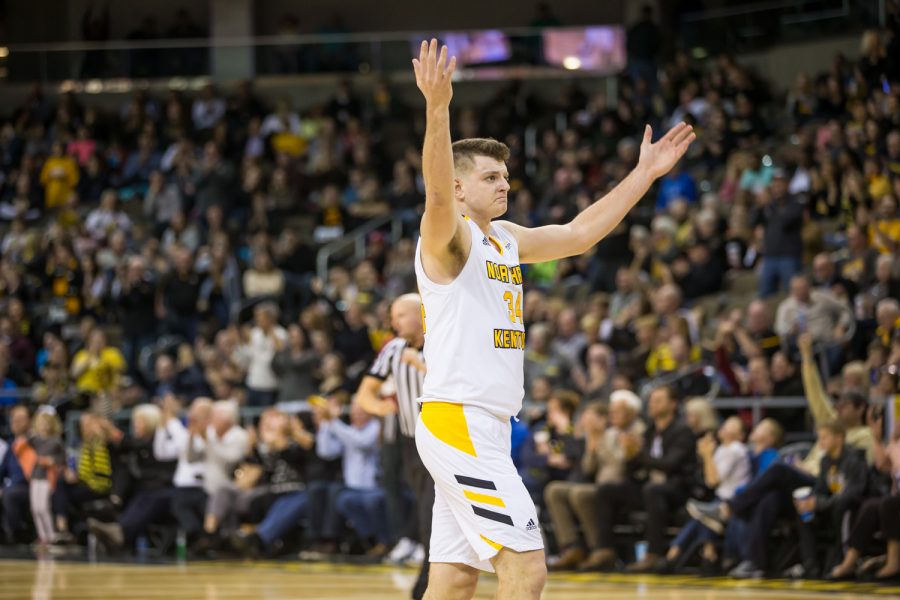 Drew McDonald (34) cheers on the fans before the start of halftime during the homecoming game against Oakland. The Norse defeated Oakland 79-64.

In the most recent bracketology done by ESPN bracketologist Joe Lunardi, the Norse men’s basketball team finds themselves as a 14-seed in the South region. Lunardi has them playing in the east region with their opening round in Tulsa, Oklahoma. The opponent offers the most intrigue as Lunardi has them playing the Purdue Boilermakers. This bracket comes from Feb. 1, and Lunardi updates it up to twice a week leading up until Selection Sunday.

“It’s really cool, we work so hard all summer and during the offseason to prepare for the season, so to see our team have success and see people around the country start recognizing our success is a great feeling,” said junior guard Tyler Sharpe. “We just have to continue to work hard every day and treat every game as if it was the championship game so that we can accomplish our goals and win another championship.”

On Feb. 4, USA TODAY writer Shelby Mast released his most recent bracketology projection and projects NKU as a 14-seed playing the 23-1 AAC-leading Houston Cougars. Mast has them in the west region playing that game in Tulsa.

“This means a lot because we are seeing all of our hard work paying off. It’s just good to hear the talk around campus and getting fans and the community excited about watching us and hopefully we can end up being that Cinderella team. We just have to focus up for the rest of the regular season and going to the Horizon League Tournament,” said junior forward Dantez Walton.

CBS Sports bracketologist Jerry Palm updates his brackets every weekend. His most recent bracket came out Feb. 3. Palm has NKU as a projected 14-seed playing the Kansas Jayhawks. The storied program is coming off a Final Four run last season and is hoping to make another run this season. Palm has the game taking place in Salt Lake City.

“Kansas would be crazy because I grew up as a kid being a huge fan of Mario Chalmers, Josh Selby and Travis Releford,” said redshirt sophomore guard Jalen Tate.

For NKU, the journey to getting to the NCAA tournament is straightforward: the Norse must win the Horizon League tournament, which starts March 5-6 with the opening round games taking place at the higher seeded team’s arena. That means NKU will need to be a top 4 seed by the end of the regular season on March 2. The semifinals and championship will take place in Detroit at Little Caesars Arena March 11-12.

The Norse currently sit atop the Horizon League with a 10-3 conference record, but the conference is a logjam after that. Wright State follows close behind at 9-4, UIC takes third at 7-5 and Oakland posts fourth at 7-6. IUPUI and Green Bay tie at 6-6, and 7th place is jammed up with Youngstown State and Detroit Mercy holding twin 6-7 records. This is important because NKU’s next opponents are Wright State on the road followed by Detroit Mercy at BB&T Arena. Why is home court advantage so important to the Norse? They currently are in a tie for the nation’s 6th-longest home winning streak with 16 straight wins dating back to last year.

Not very many mid-major schools have the opportunity to achieve what NKU does this season. With 5 remaining regular season games left, the Norse have a shot at the number one seed in the Horizon League Tournament. One area the Norse will have to improve in is fouls per game. They currently sit 287 out of 351 teams in fouls per game, fouling an average of 19.5 times per game. They will have to work on fixing that in the last stretch of the season. One area the Norse have excelled in is assist/turnover ratio. They rank 20th in the entire country with a 1.40 ratio. The more possessions they can get, the better, and valuing the basketball has been one of their strong suits this season.

“My approach is to just stay focused and enjoy every second of the rest of it, man, no matter how stressful it can be sometimes,” Tate said.