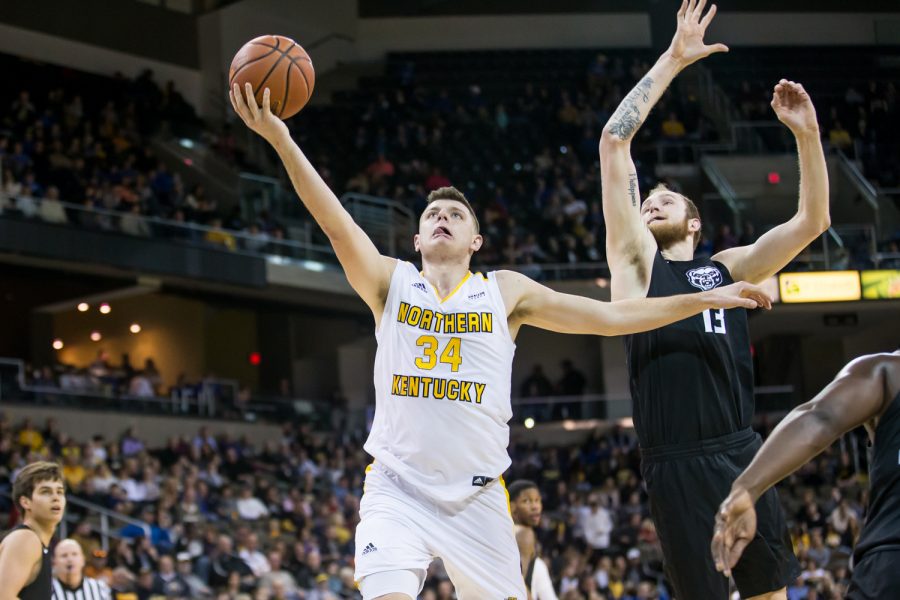 Gallery|7 Photos
Colin Johnson
Drew McDonald (34) goes up for a shot during the homecoming game against Oakland. McDonald shot 9-of-15 on the game and had 13 rebounds.

The Northern Kentucky University Men’s basketball team tamed the Oakland Golden Grizzlies Saturday night at BB&T Arena by a score of 79-64. The victory moved the Norse to 20-6 overall and 10-3 in Horizon League play. It was also their 19th straight win at BB&T dating back to last season, and helped secure their third straight 20 win season.

NKU had four players score in double figures. Senior forward Drew McDonald led the way once again for the Norse dropping 21 points on 9-15 shooting from the field, while also collecting 13 boards. Redshirt sophomore forward Jalen Tate followed with 19 points of his own, drawing eight fouls and going 7-12 from the free throw line.

Junior guard Dantez Walton had 15 points, as well as 7 rebounds, collecting all of those in the second half. Junior guard Tyler Sharpe also contributed with 11 points.

The first half started off as a tit for tat and NKU trailed 36-32 at intermission. Turnovers hindered the Black & Gold in the first half, they committed 12 while only forcing the Grizzlies to give up the ball 4 times. Oakland also had 10 second chance points in the first half, while NKU had 0. The Norse were able to gain a 19-15 rebounding advantage.

“It was a tale of two halves. I thought that Oakland controlled the tempo in the first half, and dictated the way the game was played,” Head Coach John Brannen said.

It was a different story in the second half. NKU came out of the locker room and went on a 14-4 run to take the lead 46-40. The Norse never looked back. The difference in the two halves of the game were apparent and vital for the Norse.

“We played pretty hard in the first half, shots just weren’t falling, we were just making some uncanny mistakes,” McDonald said. “I think we just kind of tightened up at halftime, and got refocused.”

Prior to Saturday’s match-up the Norse had never beaten Oakland at BB&T Arena.

“Right before the game we actually did talk about it a little bit, but you want to go out there and get every single W,” Tate said.

Next for the Norse is a Friday night match-up on Feb.15, as they head north up Interstate 75 to take on the Wright State Raiders. Tip is set for 9 p.m. EST at the Nutter Center, and will be broadcast live on ESPNU.