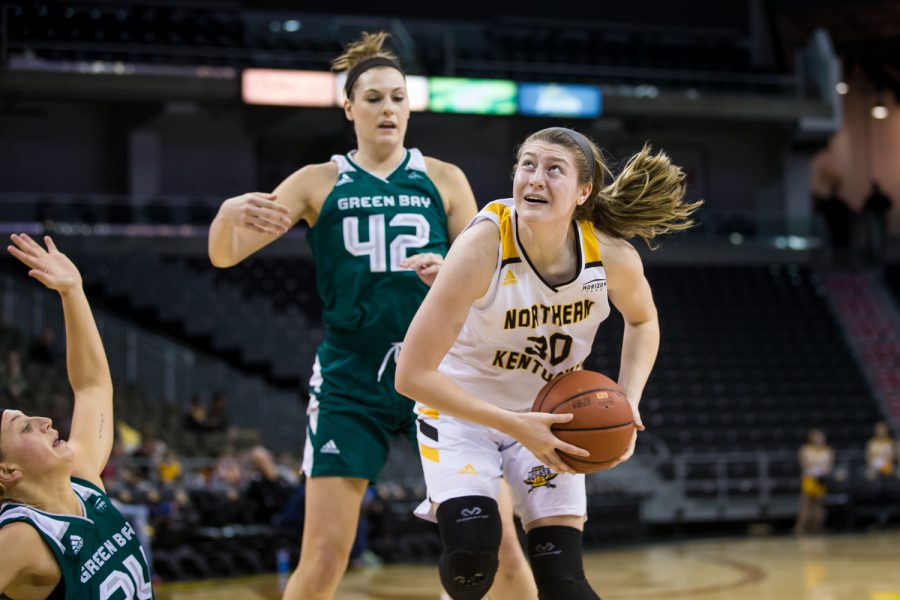 Emmy Souder (30) fights to shoot during the game against Green Bay. Souder shot 2-of-4 from three and had 10 points on the game.

The Norse bench added 21 points to the game.

NKU women’s basketball team fell to the Milwaukee Panthers Saturday afternoon 59-38.  The loss brought the Norse overall season record down to 7-16 and 6-7 in the Horizon League. The Panthers are now 6-6 in the League and 11-12 overall.

Coffey scored the first point of the game before the Panthers went on a 9-0 run which earned them the lead. The Norse fought back getting them within three points of the Panthers after Rose scored back-to-back field goals. This brought the score up, 13-10. The Norse end the quarter down, 15-10.

The Norse began to struggle after that, as they were unable to score a field goal the remainder of the half.  The half came to an end with the Panthers in the lead at 31-12. In the first half the Norse shot 16 percent from the field.

The second half started off as a struggle for the Norse as the game continued. From the field no shots were made until Coffey made a post move with 2:35 left in the third quarter.  The Panthers did send the Norse to the line six times, which resulted in the Norse gaining eight points from free throws.

The fourth quarter the Norse found more of their rhythm. They shot 35.7 percent for the quarter.  Souder earned seven of the 16 points the Norse scored during the half, which helped the Norse outscore the Panthers by four points.

The Norse will continue their Horizon League play on the road next Saturday, Feb. 16 at Wright State. The game is scheduled to start at 2 p.m. and will be aired on ESPN3.