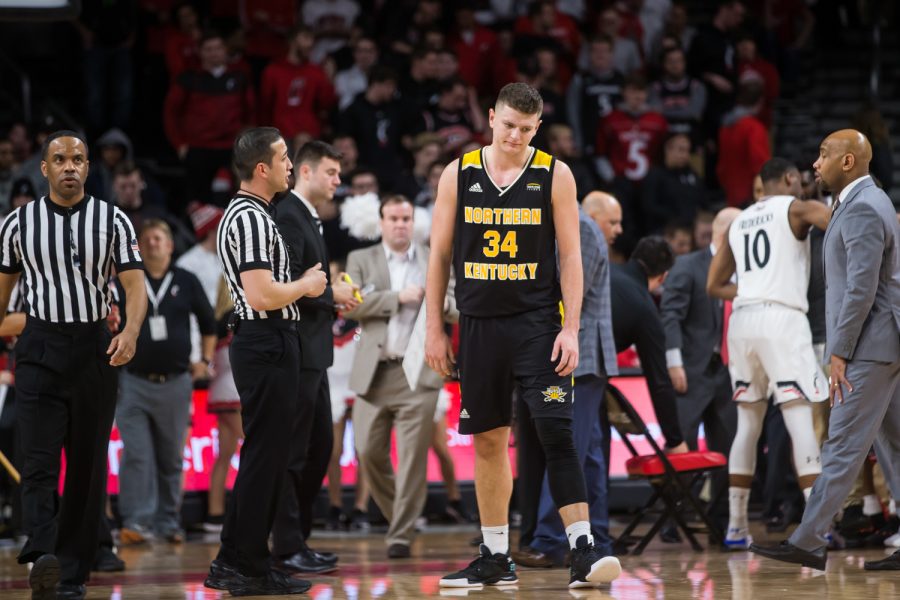 Gallery|10 Photos
Colin Johnson
Drew McDonald (34) reacts to a foul on the court during the game against UC. McDonald had 3 fouls on the night and had only 8 points on the game.

It only took 30 years for NKU and the University of Cincinnati to renew their rivalry on the basketball court, but in front of a crowd of over 11,000 at Fifth Third Arena, the Bearcats coasted to a 78-65 victory over the Norse on Tuesday night.

“I thought we would come in here and compete and I was disappointed that we didn’t,” NKU head coach John Brannen said. “Outside of the Central Florida game, this was the first real adversity of the season.”

Despite averaging 19.0 points and 9.8 rebounds per game, Drew McDonald finished the game with eight points and eight rebounds, two shy of the Norse’s all-time rebound record (859) held by LaRon Moore.

The Cold Spring, Kentucky native got off to a rough start against the Bearcats in the early goings, as he was shutout in the first half after missing all seven of his attempts from the field.

“The matchup was hard, and it was hard to attack,” Brannen said referring to McDonald’s first half slump. “One of the ways to attack it is to try and get in the middle of the floor and get some slips to the rim and go high/low. But, our biggest guy is about 240 and you need about 270 for that.”

The Bearcats continued to dominate the floor, as junior forward Trevon Scott scored 14 of his 22 points and collected eight of his 10 rebounds in the first half to help the home team build a comfortable lead headed into the break (45-25).

The Bearcats shot an impressive 88.8 percent (16-of-18) from the charity stripe, as the Norse were plagued with 13 first half fouls to the Bearcats five. The Norse were also outrebounded in the half, 28-12.

“I’d say we kinda played rattled from the beginning and they kinda came out and overwhelmed us with their size, their length and their athleticism,” center Chris Vogt said. “That bothered us in our half-court offense and we couldn’t get a lot going. It kinda took us out of all of our stuff.”

The seven-foot-one sophomore had two rebounds in 12 minutes and was held to just five points on 2-of-4 shooting.

Though the Norse cut the lead to 12 on three separate occasions and outscored the Bearcats 37-33 in the second half, the Norse were held to just 43.3 percent (13-of-30) shooting from the field as the Bearcats cruised to victory.

Tyler Sharpe led the Norse with 16 points on 6-of-9 shooting and was 4-of-7 from the three-point line. Jalen Tate added 13 points, three rebounds and three assists.

The Bearcats finished with five players in double figures, led by Scott’s 22 points and 10 rebounds. Jarron Cumberland had 12 points and five assists, while Keith Williams, Justin Jenifer and Nysier Brooks each finished with 10 points.

“Give Cincinnati the credit they deserve,” Brannen said. “They took us out of areas that we really needed to get to in order to be successful and they certainly put us in the positions they put us in.”

The Norse will be back in action on Saturday, Dec. 8 as they travel to Eastern Kentucky University for a showdown with the Colonels. Tipoff is scheduled for 6:00 p.m. and the match will be broadcasted on ESPN+.