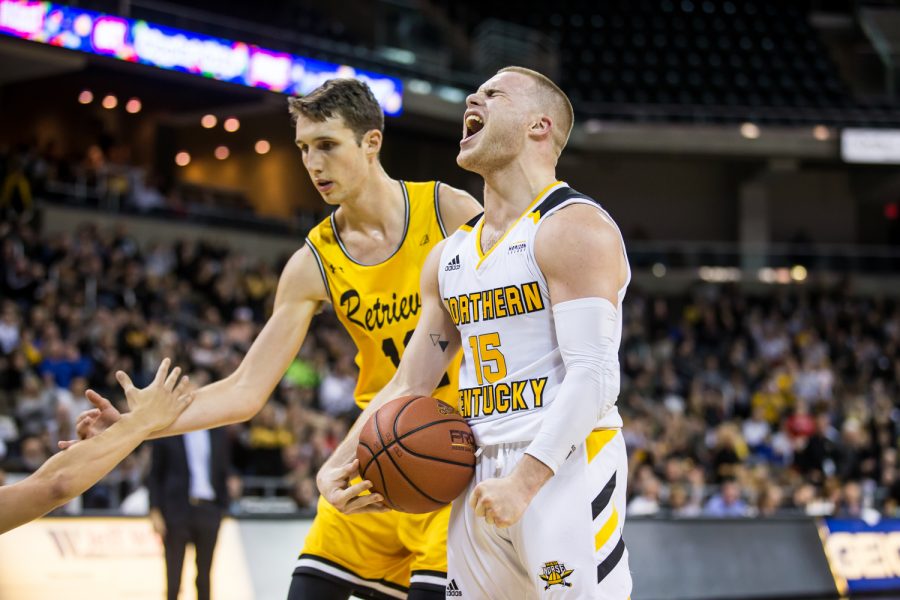 Gallery|11 Photos
Colin Johnson
Tyler Sharpe (15) reacts after a play during the game against UMBC.

The Cold Spring, Kentucky native finished the game just 10 rebounds shy of LaRon Moore’s (NKU) all-time rebound record of 859, set back in 1997. McDonald will have the chance to break this 21 year old milestone on Tuesday night, when the Norse take on the University of Cincinnati in a regular season matchup for the first time since 1988.

“It’s hard not to see it with social media, and everyone tweeting it out and people telling you about it,” McDonald said of his quest for the record. “Rebounds weren’t coming my way tonight, but the guards did a great job of getting the boards.”

Dantez Walton added 19 points (career-high) and shot 9-of-13 from the field for the Norse, with all of his misses coming from beyond the arc (1-of-5).

“I was struggling from the three point line, but Coach pulled me to the side and said ‘you can make layups as well,’” Walton said. “So, I just took that little advice and started being an active cutter and getting in the lane, and making plays.”

After nursing a groin injury, Jalen Tate returned to the lineup and tallied 10 points and two rebounds in 16 minutes of action.

However, with less than two minutes remaining in the game, Tate and Silas Adheke collided and fell to the hardwood floor. Tate began to bleed from his right eye with no apparent blood from Adheke. Both players were able to get up and walk off the court after the incident.

“I checked on them when I was back there [the locker room], and they haven’t given me a diagnosis yet,” NKU head coach John Brannen said.

“We talk about the enemy of great is good,” Brannen said. “We’re not even good yet. But if you wanna be a great team, you can’t settle for being good.”

After allowing nine unanswered points to start the first half, the Norse picked their defense up and shifted the momentum back to their offense after Tate scored the go ahead point (20-19) with a little more than six minutes to go in the half.

“Just one play can get the defense going,” McDonald said. “We’re a defensive team and we realized the offense wasn’t working for us and we needed to get that defensive momentum going which led to the offense.”

The team started to find their rhythm after Tyler Sharpe committed the robbery (steal) and made a no look pass to Walton, who finished the layup and added excitement to the BB&T Arena.

“I got the deflection and I knew I wasn’t gonna be able to get inside and save it,” Sharpe said. “Luckily me and Dantez were on the same page and he took off running.

“I kind of felt like it was a good pass when I threw it, but I wasn’t sure why everyone started to get loud. I turned my head around and said, “Oh, my gosh, it’s going right to him.’ We were on the same page.”

In addition to his steal and no look pass, Sharpe changed the momentum and finished the game with 14 points, five rebounds and three steals.

“We call it ‘bowing up,’ it’s a term we use to make a play like that,” Brannen said. “It could be a charge, a loose ball, or an exciting play like (Sharpe’s). It lifted us up.”

The Norse finished the half on a 30-2 run and led by 18 points going into the break.

Coming back from the half, McDonald nailed a three right out the gate and set the tone for the rest of the half as the Norse led by as many as 30 points to close out the match.

The Norse finished the game 13-of-19 (68 percent) from the charity stripe and even broke their their own fast-break point record with 39 points.

After the victory, the Norse improve to 8-1 and are now off to their best start in the Division I era.

Up next for the Norse, the University of Cincinnati (6-1) on Tuesday, Dec. 4. Tipoff is set for 7p.m. at Fifth Third Arena and will be broadcasted on Fox Sports Ohio.