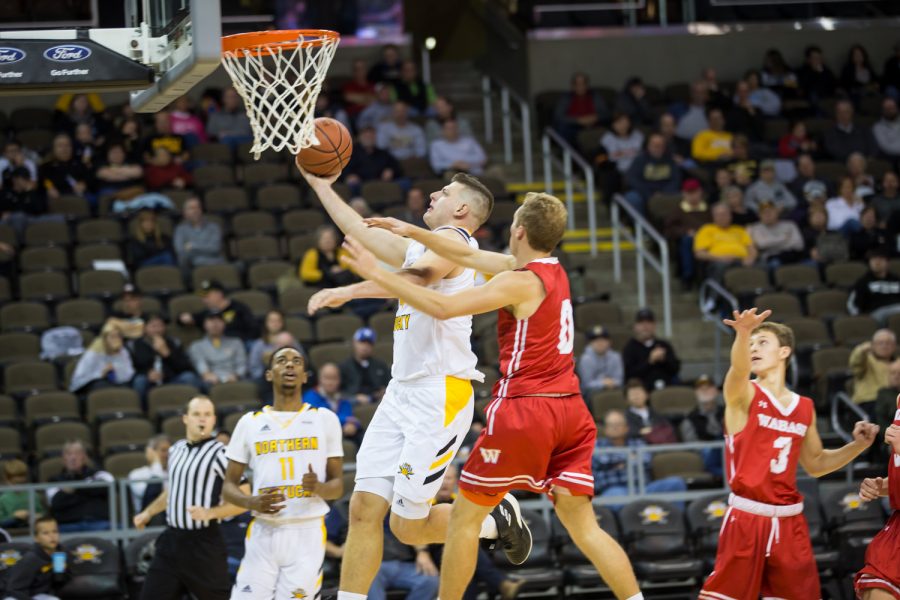 Drew McDonald (34) goes up for a shot during the game against Wabash. McDonald had 10 points on the game.

After helping the Norse to their best start (6-0) in the Division I era, Drew McDonald’s 22-point performance was no match for the University of Central Florida and their 7’6″ blocking specialist Tacko Fall, the Norse suffered their first loss of the season on Saturday night, 66-53.

Last weekend’s Maui Invitational winners (UCF) began the second half on a 23-6 run (51-36) and extended that cushion to as many as 19 points before coasting to their fourth-straight victory.

“I was really disappointed in our second-half performance,” NKU Head Coach John Brannen said. “And it really goes back to practice. We didn’t have a good week and we have to get that corrected. You just can’t turn it on for games.”

“Some guys had an opportunity to step up and didn’t take advantage of it,” Brannen said referring to Tate’s injury. “I don’t know how long he will be out, so we have to get better.”

Though the Norse held the Knights to 9-of-24 (37.5 percent) shooting, including 3-of-8 (37.5 percent) from beyond the arc in the first half, it still wasn’t enough as the senior center Fall from Dakar, Senegal scored 11 of his overall 20 points and snagged four rebounds in the half to give the Knights the lead 34-32 headed into break.

McDonald highlighted the first half as he shot 4-of-7 from the floor, including 3-of-5 from three-point range to lead all scorers with 13 points. He also added four rebounds and two assists, while Walton added nine points.

“We played a productive first half, forced [UCF] to do some things they weren’t comfortable with,” Brannen said. “They have one of the top defensive teams in the country. Their length and athleticism is tough to deal with.”

The Norse came into Saturday night’s contest averaging 85.7 points per game but were held to under 60 points for the second time this season. The Knights clamped down and held them to just 19-of-59 (32.2 percent) shooting from the field and 8-for-31 (25.8 percent) from beyond the arc.

With the loss, the Norse dropped to 6-1 overall, while the Knights improve to 5-1 on the season.

The Norse will be back in action on Tuesday, Nov. 27 as they hit the road to Morehead State for a showdown with the Eagles. Tipoff is scheduled for 7:30 p.m. and will be broadcasted on ESPN+.