McDonald collected his 37th double-double and was named tournament MVP 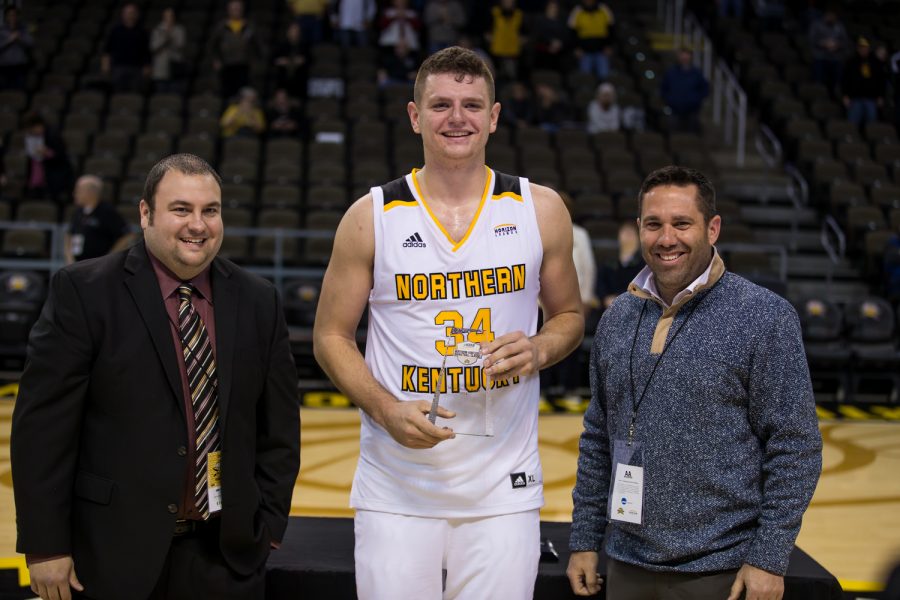 Gallery|11 Photos
Colin Johnson
Drew McDonald (34) is recognized as the tournament's Most Valuable Player following the game against Coastal Carolina. McDonald had 31 points on the game.

“I thought this was the first of the six games where everyone did their job,” NKU head coach John Brannen said. “We didn’t have any slippage of guys coming into the game. Everybody did their job coming off the bench and their starting roles. (I) really felt like we finished strong.”

With a 1:26 remaining in the game, the Norse were ahead 84-76 until David Kralj drained a three to cut the deficit down to five with a 1:06 left. The Chanticleers would come within four, but it wouldn’t be enough as the Norse went 5-of-6 from the free throw line in the final minute to earn the victory.

“I think we saw that we have a team that can go deep on the bench and everyone can contribute,” Drew McDonald said. “Trevon [Faulkner] came in and gave us a spark that we needed from the bench and when you have so many guys coming off the bench contributing, that’s tough for other teams.”

McDonald was named MVP of the tournament and led the Norse with 31 points and 12 rebounds, while Jalen Tate garnered All-Tournament Team honors and scored 16 points and dished out three assists.

“The crowd really carried us a couple times tonight,” Tate said. “With the third game in three days, it’s hard to stay motivated the entire game, but the crowd was amazing tonight.”

The first half was close the entire 20 minutes and featured five ties and five lead changes. McDonald found the hot hand early and scored the first five points for the Norse, but the Chanticleers Amidou Bamba, gave the Norse fits early in the paint and went 4-of-4 shooting to finish the half with nine points. Though the Chanticleers would hold a slight lead, the Norse finished the half ahead 39-36. McDonald nearly had a double-double in the first half after finishing with 14 points and nine rebounds.

The second half began with a parade of three-pointers from both teams. The Norse went 2-of-5 from three-point range, while the Chanticleers started the second half 3-of-4 from beyond the arc to cut the lead down to two. The Norse finally extended the lead to double-digits after a 13-0 run with 7:23 remaining to make the score 74-60. Though the Chanticleers would mount a comeback with a run of their own, they would only cut the deficit to four as the Norse held strong for the victory, 89-83.

The Norse finished 3-0 in their first team-hosted tournament, with games gradually getting harder each step of the way.

After defeating UNC Ashville(77-50) on Friday night, the Norse escaped Saturday night with a six-point victory (59-53) over Manhattan before Sunday’s victory.

“I think it went really well for the most part,” Tate said. “I think we learned a lot about our team and what we can become. It gave us that sight into the future.”

The Norse will hit the road to Orlando, Florida for a matchup against UCF on Nov. 24 at 6pm. Tip-off is scheduled for 6:00 p.m. and will be broadcasted on ESPN3.