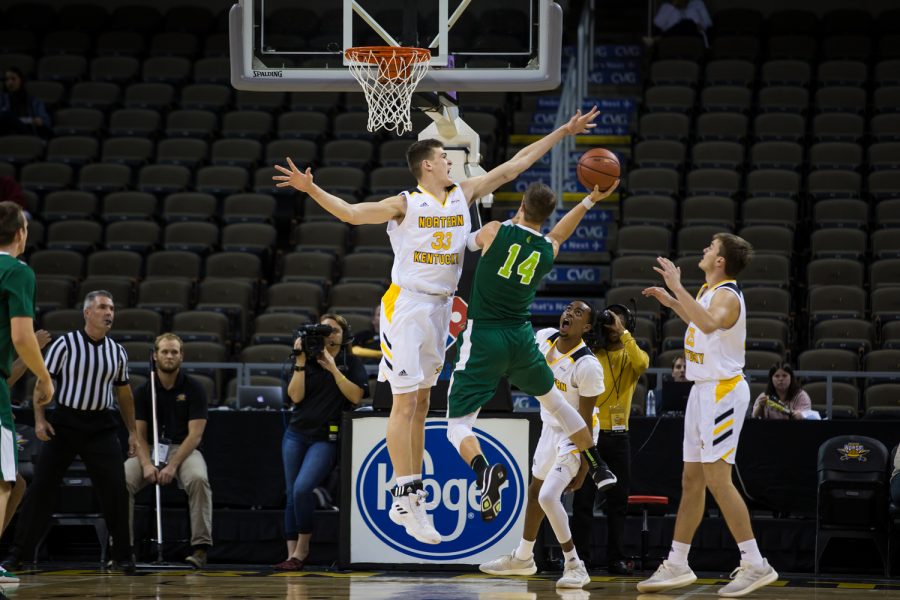 Chris Vogt (33) blocks a shot by a Wilmington player. Vogt had 3 blocks on the game.

A new basketball tournament is bringing top-tier teams together at BB&T this weekend, and the Norse face stiff competition.

“It’s a good preparation for March,” Drew McDonald said. “It’s not easy as a player, but it’s something you have to do at the mid-major level if you want to win a conference tournament and go to the NCAA [tournament].”

UNC Asheville currently has one win under their belt. Last season they went 21-13, and finished in the semifinals of the Big South tournament. UNC, a younger team, has a new Head Coach Mike Morrell, with eight freshmen and five sophomores making up their 15-man roster. Players to watch from UNC are Freshman Guard DeVon Baker, the leading scorer for the Bulldogs, who made three out of his four three point attempts last game, and freshman forward Stephen Edoka, who is 6’4, and racked up eight defensive rebounds and 11 total rebounds for their last game. If you can’t make it to BB&T Arena, you can catch this matchup on ESPN3.

The Manhattan Jaspers are 0-2 so far in the season. They ended last season with a record of 14-17. The Jaspers made it to the quarterfinals of the Metro Atlantic Athletic Conference tournament.  Manhattan is another young team in the tournament, with seven Freshmen on the squad and a total of 11 out of the 18 players being underclassmen. Players to watch are senior guard Thomas Capuano, who’s contributed 19 points, eight rebounds, and is shooting 50 percent on threes so far in the season. Freshman guard Elijah Buchanan has added 10 points for the Jaspers this season and shoots 40 percent from the three point line. Watch this game on ESPN3.

2-0 is how Coastal Carolina has started the 2018-19 season. Last season, the Chanticleers finished 15-18 on the season and lost in the opening round of the Sun Belt Tournament Championship. The Chanticleers have a good balance of seasoned players and newcomers this year, with eight upperclassmen and six freshmen to round out their 15-man roster. Players to watch for Coastal Carolina are senior forward Zac Cuthbertson with 58 points and 14 rebounds on the season, and redshirt freshman guard DeVante Jones, with 25 points, nine rebounds, and eight assists on the season. Watch this matchup on Fox Sports Ohio.