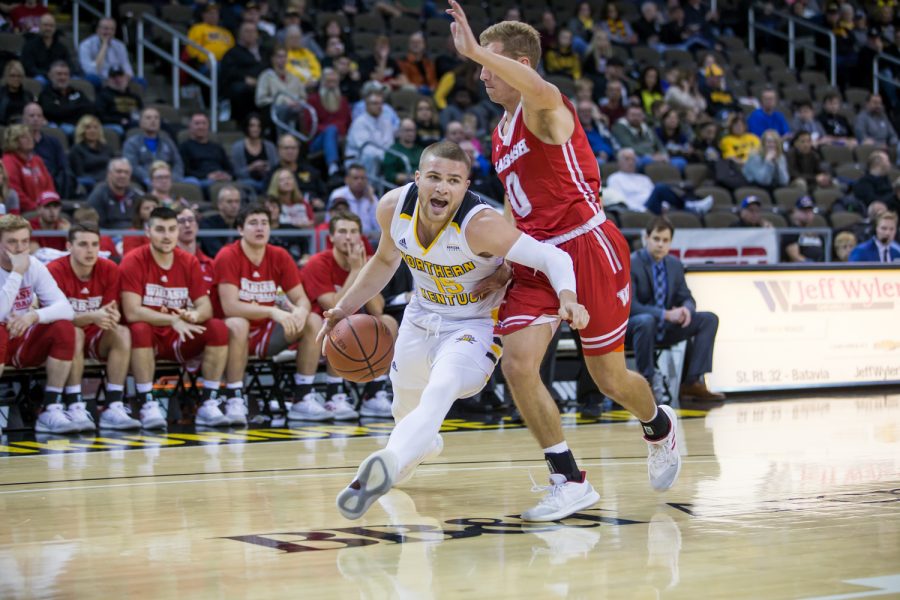 Gallery|9 Photos
Colin Johnson
Tyler Sharpe (15) fights toward the basket during the game against Wabash. Sharpe shot 3-of-7 from the field.

Zaynah Robinson led the Norse in both scoring (16) and assists (four), while Tyler Sharpe led the team with five steals and added 15 points to the scoreboard. Freshman Adrian Nelson led the team in rebounds with seven respectively.

The Norse started slow against the Giants, forcing head coach John Brannen to quickly subbed two minutes into the game with Wabash up three to nothing. The first point put up for the Norse was by Nelson. He was fouled and sent to the free throw line, where he sank both shots.

“I feel like we developed a understanding of what we have to do. We obviously started off really slow and we just talked to ourselves as a team,” Robinson said. “We just understand that we have to pick it up and execute as planned.”

After the substituting, the Norse picked it up when Jalen Tate tied the game with a lay up and fouled on the way up. Tate made his free throw and added another point, to give the Norse their first lead of the game,15-14.

“We go as Jalen goes a lot of the times and I told him that,” Brannen said. “When he hits a high level, our team performs at a high level. That’s a responsibility that oftentimes chooses you, you don’t choose it.”

The Norse went on a 25-0 run that finally ended when they sent the Giants to the free throw line in the 13th minute. In this run, Sharpe added a much needed spark defensively by getting two steals that converted over into some offense.

“I thought I gave us a good spark at the beginning, we started off a little slow so it was good to kind of get a couple of easy ones to kind of get the crowd into it a little bit and then kind of pick up my teammates a little bit,” Sharpe said. “But I mean, I just tried to do, what I do every night and I just kind of bring energy and let everything else come to me.”

Robinson helped lead the Norse on a 15-2 run in the second half and never looked back as they coasted to the victory.

The Norse out shot the Giants 55.6 percent to 36.7 percent in the second half. The Norse bench also outscored the Giants bench 38 to 16.

“I’ve been really happy with his [Robinson] defensive tenacity, tonight. You know obviously he can play offense, what I’m focused on his ability to continue to perform defensively but he did that tonight,” Brannen said. “He’s getting better every day. He’s a high character young man who wants to be good and cares what his coaches and his teammates think.”