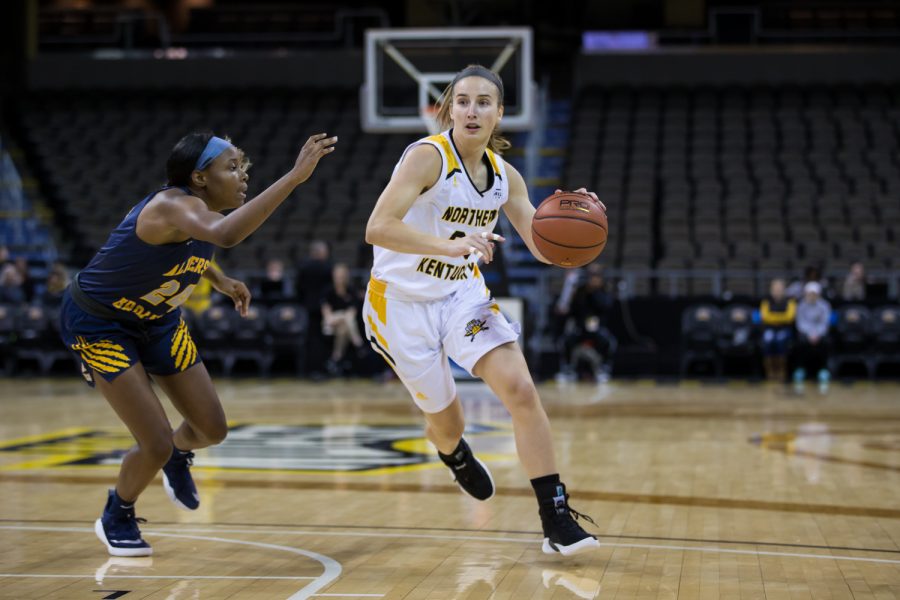 Gallery|7 Photos
Colin Johnson
Kailey Coffey (23) drives toward the basket during the game against Alderson Broaddus. Coffey had 6 pints on the game.

The NKU women’s basketball team opened the 2018-19 regular season with a 73-32 victory over Alderson Broaddus University on Wednesday evening. With the victory, this marks the first time since 2015 that the lady Norse have started the season 1-0.

“I am happy to start the season 1-0 for our team,” head coach Camryn Whitaker said. “I don’t think we’ve done that in the past two years, so hopefully that gives us a little bit of confidence moving forward.”

Molly Glick led the Norse with 13 points, while newcomer Ally Niece and junior guard Kennedy Archer each had 10 points, five rebounds and an assist.

“It was a good team effort,” Whitaker said. “I think we saw some glimpses of players that came off the bench, one of them Kennedy Archer. That was a bright spot for us and I thought Taryn [Taugher] came in and gave great a effort. Especially in that last quarter. She continued to play hard and didn’t really care what the scoreboard said and that’s what we expect out of our team every night.”

The Battlers managed to get the tip off, but they were no match for the Norse, who were able to quickly turn it over and get the first basket as this helped set the pace for the game.

The Norse managed to score 22 of their 35 first half points in the paint. They also had six points from fast breaks to finish the half.

Offensively, the Norse had a field goal percentage of 40% and finished the first half ahead 35-18.

“It’s nice to get started off on the right foot,” Whitaker said. “I don’t know if they just need a little kick at halftime or what, but we need to try to get off to better starts. Regardless though I think it was a good team effort.”

The Norse extended their lead in the third quarter after going on an 18-0 run and continued this momentum in the fourth, by going on an 11-0  run midway through and closing the game out 73-32.

Coach Whitaker said she was proud of the fact that everyone got to play and get the necessary experience, especially the youth on the team.