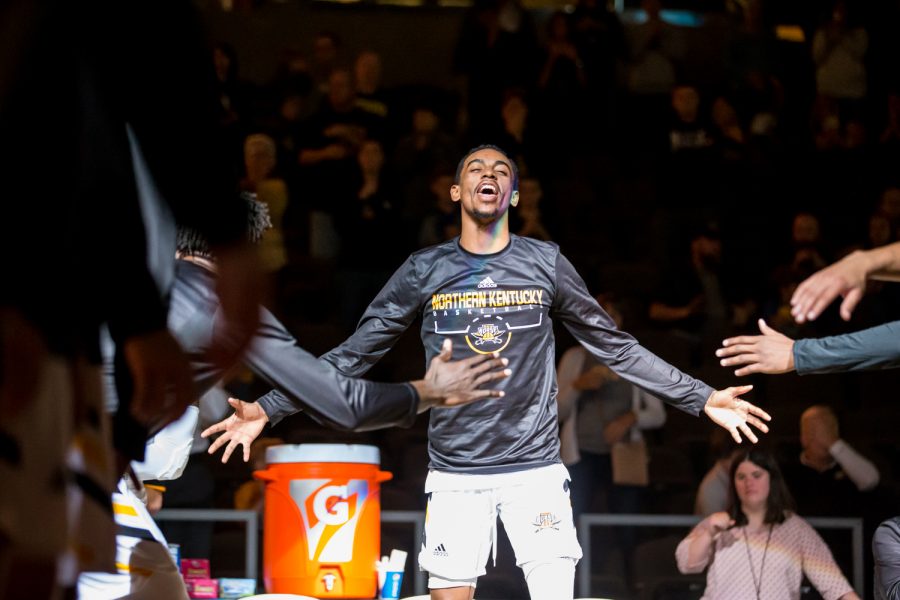 Gallery|11 Photos
Colin Johnson
Jalen Tate (11) is introduced before the game against Wilmington. Tate lead the Norse with 17 overall points.

The NKU men’s basketball team opened the regular season by defeating Wilmington College 102-38 on Tuesday evening. With the victory, the Norse start their season 1-0 and won for the 800th time in program history.

“I think a lot of good came out of tonight,” redshirt sophomore Jalen Tate said. “ Being able to cap off the 800th win for all the alumni and fans that were here tonight, it’s a great feeling honestly.”

Tate led the Norse with 17 points and eight rebounds, while Drew McDonald finished with 14 points and nine rebounds.

“It was good to come out and get our feet wet for a real game to start the regular season,” head coach John Brannen said. “For all the Non-Division I teams that we play, I’ve always thought that Wilmington plays as hard as any team. We really appreciate them for coming to play.”

With all the new players on this year’s team, Tyler Sharpe knows his role as a leader on this team.

“I knew I would have to step up with Jalen as a leader on this team to help the new guys learn the system,” Sharpe said. “I think I have taken on the role as a vocal leader as well as leading by example.

Tate and McDonald started the first half on an 11-0 run and combined for all the points. Wilmington then cut the deficit to six points with 12:59 left in the half, but the Norse proceeded to go on a 19-0 run to extend the lead to 33-8. The Norse shot 17-32 from the field in the first half.

“It’s something we definitely need to fix,” Brannen said.

The Norse will travel to Northern Illinois on Friday, Nov. 9 for their next game. Tipoff is scheduled for 7pm. The game will be broadcast live on ESPN+.