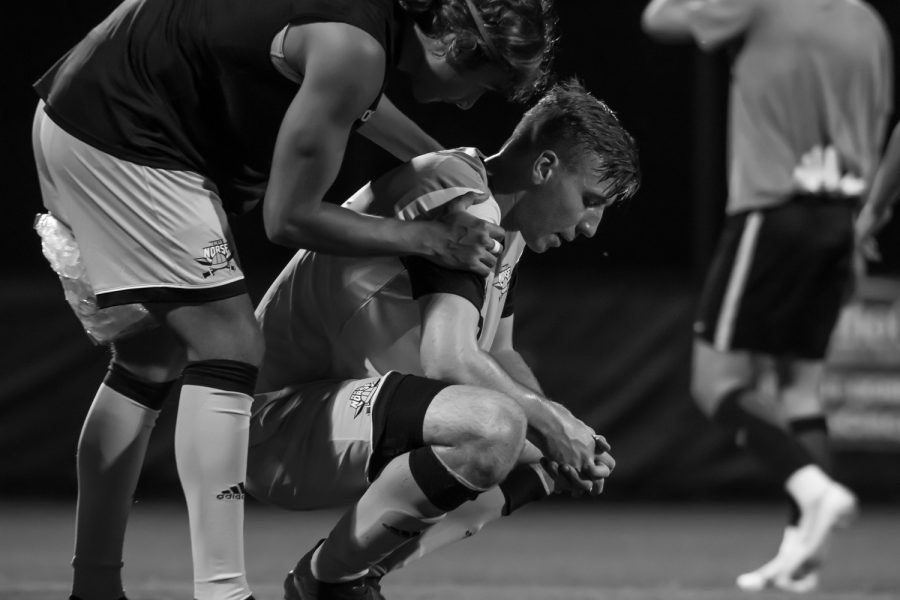 Rizwaan Dharsey (23) talks to Calvin Murphy (18) after the loss to UK.

The NKU men’s soccer team needed a win and a Milwaukee tie/loss at Wright State to have any chance of qualifying (top six teams) for the Horizon League Men’s Soccer Championship tournament on Monday, Nov. 5, but ultimately fell to the Flames 3-0 on Friday afternoon.

“It’s certainly not the outcome that anyone wanted this evening,” NKU head coach Stu Riddle said. “I’d like to congratulate an incredible group of seniors on their terrific careers that have seen them break nearly every program Division I record. I trust and believe in the returning players and know we will improve again next season and beyond.”

The Norse applied pressure early on as Calvin Murphy was able to record a shot in the fifth minute, but was turned away by Flames goalkeeper Sawyer Jackman. Flames senior forward Max Todd would later create three quality shots, but was unsuccessful after Norse goalkeeper Jim Barkei made the save followed by the Norse defense stepping in to make the save after Todd’s shot passed Barkei in the 14th minute. Todd’s last attempt of the half saw him push the ball wide right.

The Norse would try to put some points on the board in 21st and 31st minute after two unsuccessful shots by Rikard Lindqvist and Alex Willis, but it was the Flames to strike first after Jacob Greiber nailed a shot in the upper right quadrant to give the Flames a 1-0 lead in the 44th minute.

The Norse wasted no time trying to put some points on the board in the second half when Willis fired a shot just forty nine seconds in, but was ultimately rejected by Jackman. The Flames would continue to mount there lead after goals from Todd and Oscar Gonzalez in the 46th and 55th minute. As the half grew, the Flames did a tremendous job keeping the Norse pinned back at their own end as they continuously fired shots at Barkei, but were unsuccessful. With there season on the line and only minutes to spare, Willis and Nick Perez fired two shots for the Norse in the 87th and 89th minute, but fell short as there season came to a close.

With the win, the Flames secured the No. 2 seed in the Horizon League Men’s Soccer Championship tournament for the fourth consecutive year and received a bye into the semifinals to face the highest-remaining seed after the quarterfinal matches, while the nationally-ranked Raiders (No.20) solidified their first place regular season finish with a shutout victory (4-0) over the Panthers Friday night.

The regular season champs also secured the No. 1 seed in the tournament and will receive a bye into the semifinals to face the lowest-remaining seed on Thursday, Nov. 8 at 4 p.m.

The Norse end their 2018 season in seventh place with a record of 10-7 overall and 3-5 in conference play. The ten wins are the most in the Division I era for the Norse as they now look ahead to the 2019 season.