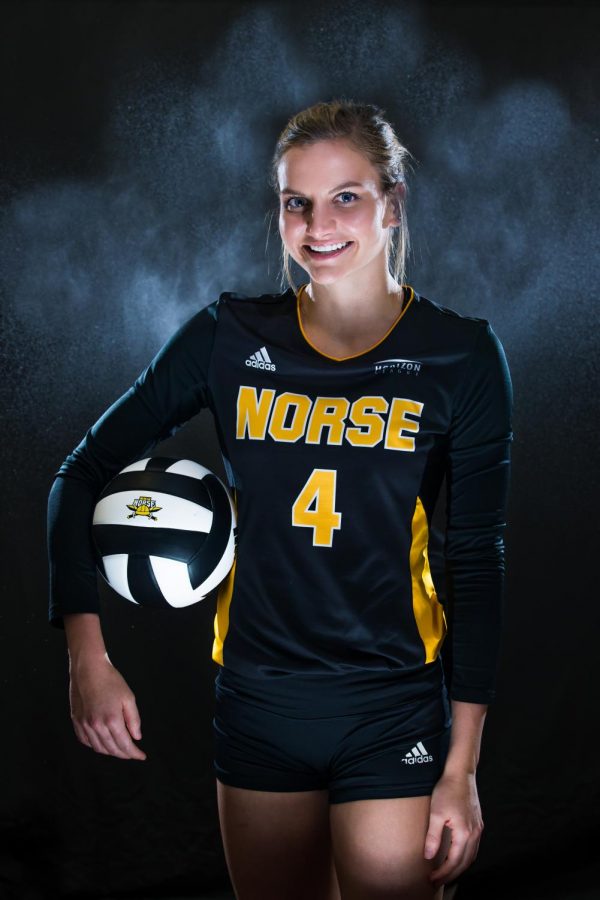 NKU’s outide hitter Haley Libs was one of thirty NCAA volleyball student athletes selected in October as a candidate for the 2018 Senior CLASS award in collegiate volleyball. The thirty candidates were recently narrowed down by a selection committee to ten finalists, one being the senior standout.

“It’s not something I realized I would be nominated for,” Libs said. “I know that it encompasses the whole athlete, so for me to be able to be nominated and move all the way to the top ten finalists is a very huge accomplishment.”

To be eligible, a student-athlete must be classified as an NCAA Division I senior and have notable achievements in four areas of excellence: community, classroom, character and competition.

“Never did I think that my career would end on such a positive note,” Libs said. “Although it’s something that I didn’t always picture happening, I do believe I worked hard for it and that’s something very important.”

The Senior CLASS Award, which stands for Celebrating Loyalty and Achievement for Staying in School, focuses on the student-athlete and encourages them to use their platform in athletics to make a positive impact as leaders in their communities.

“This is a very deserving honor for Haley,” NKU volleyball head coach Liz Hart said. “She’s a great representative of the volleyball program and our athletic department. Not only is she a high-achieving student, but she has had great success on the court, she’s an excellent role model and she is someone who is consistently involved in the community.”

A native of Floyds Knobs, Indiana, Libs was diagnosed with Acute Lymphoblastic Leukemia (ALL) when she was 3 years old. ALL is a type of blood and bone marrow cancer, the most common type of cancer in children.

“I had a whole support system around me,” Libs said. “Although I was 3 years old, I definitely pushed through and I was able to conquer it.”

Although Libs doesn’t remember much about her experience, her family realized how troubling those times were for all involved. Libs and her family decided to volunteer their time at Norton’s Children’s Hospital in Louisville to give back to the place that helped her overcome that obstacle in her life.

“Hope is really what I love to give them,” Libs said. “The fact that I can do that is super special.”

In addition to Norton’s, Libs also leads the volleyball team in their community efforts by working at Henry Hosea Soup Kitchen in Newport, Matthew 25 Ministries and as an ambassador for Team IMPACT, a national nonprofit organization that connects children facing serious and chronic illnesses with local college athletic teams. There, players and patients form lifelong bonds and life-changing outcomes.

“It’s important for our players to understand just how big of role models they are,” Hart said. “And how big of an impact and difference they can make in someone’s life.”

Libs has also been impeccable in the classroom. Balancing volleyball and classes, she has managed to maintain a flawless 4.0 GPA and was named to the College Sports Information Directors of America Academic All-District two team in 2017. She was also a two-time Horizon League All-Academic honoree.

Now a senior, Libs will continue her education by applying to graduate school for occupational therapy where she hopes to get her doctorate degree.

“She’s a perfectionist,” Hart said. “Academics are very important to her, and she gets herself very worked up when she does not have a perfect ‘A,’ so she’s a 4.0 student and a really big overachiever.”

Committed and hard working in both her academic studies and volleyball, Libs was chosen by her teammates as their captain over the past three seasons. She has continued to make their time at NKU an enjoyable experience by communicating well with her teammates and by being a leader for them on and off of the court.

“She is definitely always going to be there for you, and she’ll make you smile,” freshman utility player Anna Brinkmann said.

Sophomore outside hitter Maddy Weber added, “I feel like she is a really good role model for people to be driven, and things that will help them as far as life goes.”

On the court, Libs is a three-time All-Horizon League honoree, conference freshman of the year, is the only player at NKU to ever have a 30/30 match, (30 kills/34 Digs) obtained against Northern Illinois this season and recently became the school’s 10th member of the 1,000 kill/1,000 dig club.

“Ever since Haley stepped on a court her freshman year, she has been incredibly valuable to us,” coach Hart said. “It is very hard to find an outside that has really good ball control, but is also a great terminator.  She does both of those things very well.”

As the team’s only senior in her final season, Libs said her team has rose to the occasion by stepping up in their roles in hopes of a winning season and capturing the Horizon League championship.

“We definitely want to walk away with those rings this year,” Libs said. “We have a really strong team and I think we are all going towards that goal.”

Nationwide fan voting begins immediately, and fans are encouraged to vote on the Senior CLASS Award through December 5. Fan votes will then be combined with media and Division I head coaches’ votes to determine the winner.

The Senior CLASS Award winner will be announced in Minneapolis during the 2018 NCAA Division I Women’s Volleyball Championship in December.

*To vote for Libs and to read more about the Senior CLASS Award, please visit