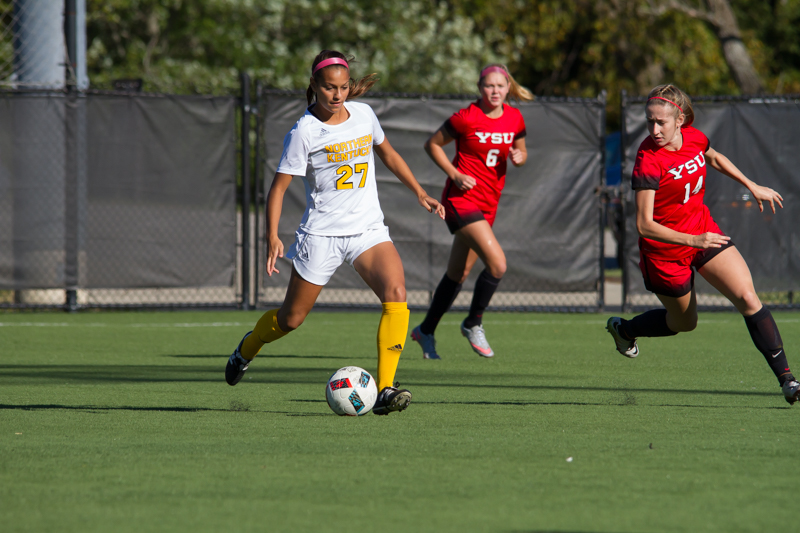 Gallery|4 Photos
colin_johnson
Samantha Duwell dribbles around the Youngstown State defense. The Norse scored three goals in a win against the Penguins

“Congratulations to Sam, Taylor, and Shawna on being selected to the All-Horizon League First Team, and to Lily on being named to the Horizon League All-Freshman team,” NKU head coach Bob Sheehan said. “Sam has been a terrific leader and has scored key goals throughout the year from her central midfield position. Taylor has been outstanding in organizing the back line in each of her four years as a starting center back. Shawna has embraced and excelled in her new role as a forward this year and has also scored key goals. Lily has been an excellent defender in just her first year with us.”

Duwel, a Cincinnati, Ohio native and 2017 Horizon League All-Tournament team member, started in all 16 matches for the Norse and recorded five goals and five assists for a total of 15 points in the regular season. She also scored three game-winning goals against IUPUI, Detroit Mercy and Youngstown State.

Spaulding, a defender from Strongsville, Ohio and 2017 Second Team All-Horizon League team member, was a key contributor to the Norse defense that combined for seven shutouts this season.

Zaken reigns from West Newton, Pennsylvania and led the Norse in goals scored (6) and points (17) and started in all 16 matches this season. The 2016 Horizon League All-Tournament team member is currently tied for first in the Horizon League in goals and second in points. Zaken also scored two game-winning goals this season against UIC and Green Bay.

Menssen, a defender from Medina, Ohio,had an exceptional freshman campaign for the Norse appearing in 13 matches and six of the team’s seven shutouts this season. Prior to NKU, she helped her team to a 15-1-5 record and received MVP honors, All-Conference First Team, All-District First Team and All-State First Team honors.