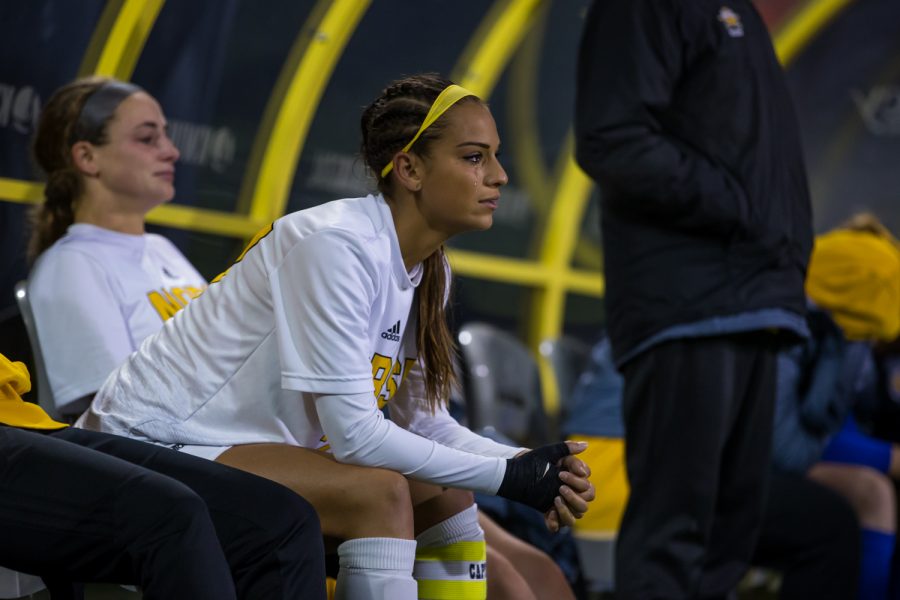 Though they took an early 1-0 lead just four minutes into match play, the NKU women’s soccer team were unable to put anything else together as they fell to Oakland 2-1 in the Horizon League Tournament quarterfinals game on Monday evening.

With the loss, the Norse finish their season 10-6-1, while the Golden Grizzlies advance to the semifinals to take on the Panthers of Milwaukee on Thursday, Nov. 1. Kickoff is scheduled for 8 p.m. with the winner advancing to the championship round on Saturday, Nov. 3.

“We have an outstanding group of seniors, and this game doesn’t diminish how special they are,” NKU head coach Bob Sheehan said. “Our team worked hard throughout the match, and we congratulate Oakland on moving to the semifinal round.”

Sydnye Gagner netted the game winning goal for the Grizzlies in the 78th minute after Lauren Bos played a cross from the right side of the box to allow Gagner to fire the ball into the back of the net. The goal was Gagners first of the season while Bos tallied her third assist of the year.

Emily Lohmann played the entire 90 minutes and led the Norse with six saves on 17 shots. Lohmann’s final save as a Norse came in the 88th minute after a failed attempt by Carmela Barro. The save was Loehmann’s 66th of the season.

The Cincinnati native, who was named Horizon League Defensive Player of the Week on Monday afternoon, ends her season with 66 saves and her career as a Norse with 213 saves.

Kailey Ivens fired the only shot on goal for the Norse in the first half after the ball fell to Ivens on a deflection and she was able to slide it passed Oakland’s goalkeeper Jaimie Leas in the fourth minute of play.

Bos and Ali Amante were unsuccessful in their shot attempts against the Norse defense in the 18th and 19th minute, but were finally able to break through when Elyssa Holfeld fired a shot on goal in 32nd minute that was saved by Lohmann after the shot came off one hop.

Both teams ended the first half with one shot on goal and one corner kick.

The Norse were unable to get anything going in the second half offensively as the Golden Grizzlies finally answered in the 66th minute after Alexa Sabbaugh scored from close range to knot the game at one. Lohmann recorded one of her six saves on the night in the 70th minute while Emily Soltes fired an unsuccessful shot from outside of the box in the 74th.

The Golden Grizzlies would seal the deal in the 78th minute after Gagner headed the ball into the back of the net with an assist from Bos to give the Grizzlies the lead, 2-1.

Each team took four corner kicks while the Grizzlies held the advantage on shots attempted with 17 compared to the Norse’s four.

“Obviously we had bigger goals than losing in the quarterfinals,” Sheehan said. “It’s very disappointing but it doesn’t take away how special our team was and how special again a group of seniors that we had. We’re really going to miss them.”