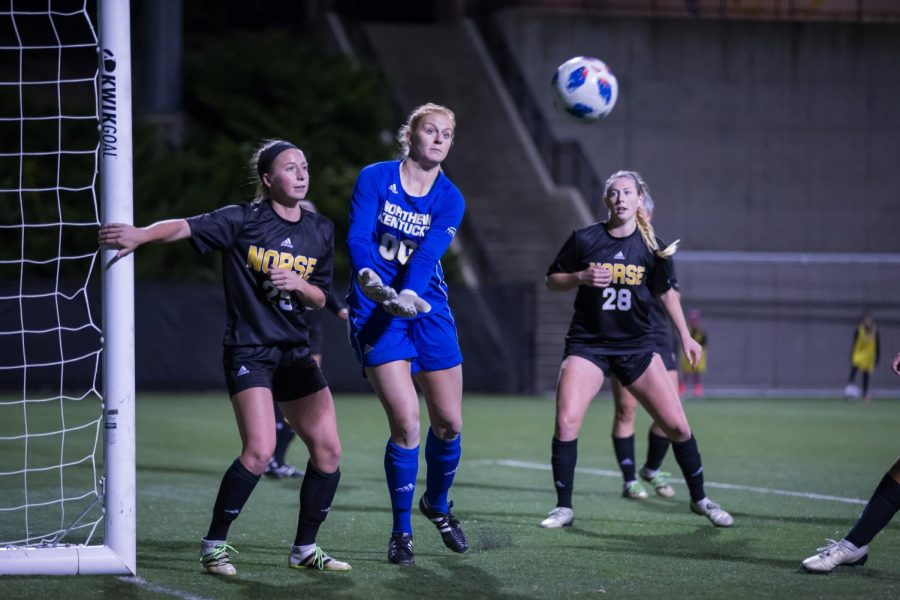 Emily Lohmann (00) made one save on five shots in a game against Oakland.

After an 11 save performance in her team’s 1-0 shutout victory over the University of Illinois at Chicago on Friday evening, Emily Lohmann was named Horizon League women’s soccer Defensive Player of the Week on Monday afternoon.

This marks her seventh shutout of the year and is currently averaging a .811 save percentage on 60 saves this season.

“Congratulations to Emily on being named Defensive Player of the Week,” NKU head coach Bob Sheehan said. “Emily has played at a high level all season and is very deserving of this award.”

This marks the second time this season and fourth overall in her Norse career that Lohmann was selected Horizon League Defensive Player of the Week. Lohmann was honored on Aug. 27 for the week of Aug. 20-26 when she made five saves on 12 shots faced in the team’s 1-0 shutout victory over Xavier University and when she made another six saves on 18 shots faced in the team’s 1-0 overtime loss against the University of Cincinnati.

Lohmann will be back in action tonight as the Norse host Oakland in a Horizon League Tournament quarterfinal matchup. Kickoff is scheduled for 7 p.m. and will be broadcast  on ESPN+.