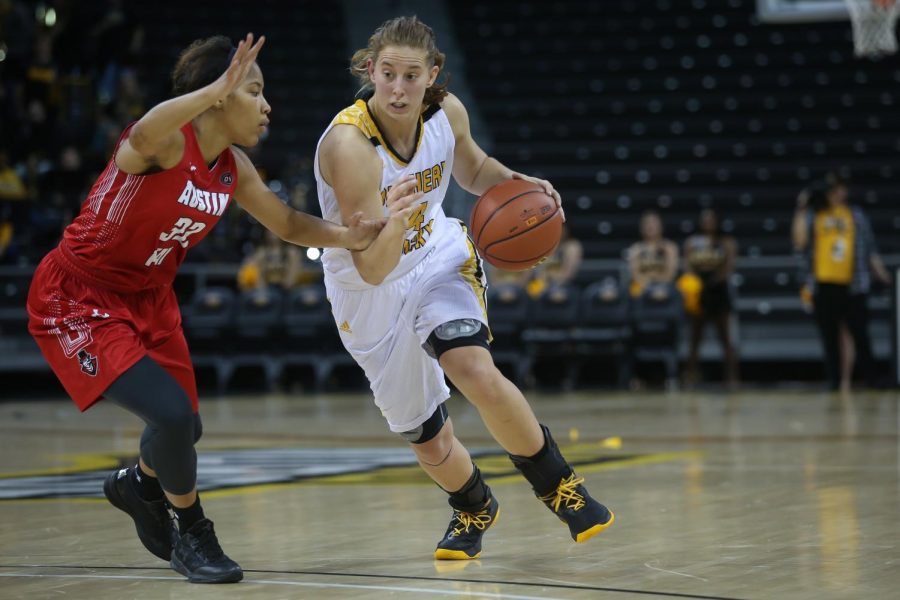 Molly Glick (24) drives toward the basket in the game against Austin Peay.

The NKU women’s basketball team announced their full schedule at the end of September and includes 10 non-conference games against the likes of Louisville, who made it to the 2018 Final Four, last season’s Ohio Valley conference champions Belmont and the Friar Holiday Classic hosted by Providence from Dec. 19-21. The schedule, which features 12 regular season home games at BB&T Arena, will start on Sunday, Nov. 4 when the Norse host Pikeville in their only exhibition match of the season, followed by their regular season kick-off match up against Alderson Broadduss University at home on Wednesday, Nov. 7.

“This year’s non conference schedule is sure to test our team in the 2018-19 season,” head coach Camryn Whitaker said.” “Playing in two tournaments, we feel, will help us prepare for the Horizon League Tournament in March, where we’ll play games on consecutive days. I’m also excited to host the reigning Ohio Valley Conference champions, the Belmont Bruins, to BB&T Arena in November, which should provide a great challenge.”

The Norse will see tournament action early on at the Kent State Classic when they take on a pair of Mid-American Conference opponents, Kent State on Saturday, Nov. 17 and Akron on Sunday, Nov. 18 and return home for a showdown against the Ohio Valley champions, Belmont University on Wednesday, Nov. 21. Following the Thanksgiving break, the Norse will take on a pair of non-conference opponents from a season ago when they travel to Austin Peay on Monday, Nov. 26, before returning home to host Illinois State in the final home contest of the calendar year on Friday, Dec. 7.

The Norse will then see their highest ranked Division I opponent to date, when they take the 100 mile road trip to Louisville and take on the top ranked Cardinals on Saturday, Dec. 15.

“Having the opportunity to play in an arena with a great atmosphere in our home state will be an unbelievable experience for our team,” Whitaker said.

Prior to the start of conference play, the Norse wrap up their non-conference schedule at the Friar Holiday Classic in Rhode Island, hosted by Providence College. The Norse will begin tournament play against La Salle on Wednesday, Dec. 19, followed by Providence on Thursday, Dec. 20 and wrap up tournament play against Pepperdine University on Friday,  Dec 21.

For their conference schedule, the Norse will play every opponent twice, starting with UIC on the road Friday, Dec. 28, followed by IUPUI on Sunday, Dec. 30. In the Norse’s first conference home game of the season, they will go toe to toe against Milwaukee (Boone & Kenton County Night: $3 tickets) on Thursday, Jan. 3, followed by the reigning Horizon League champions Green Bay (Fan appreciation day: $1 tickets) on Saturday, Jan. 5. Following a week off from competition, the Norse will host rival Wright State (Alumnae day)on Saturday, Jan. 12, then hit the road to Cleveland State on Friday, Jan 18 and Youngstown State on Sunday, Jan. 20.

The Norse return home for a four-game home stand against Detroit Mercy on Friday, Jan.25, Oakland on Sunday, Jan.27, IUPUI on Thursday, Jan.31 and UIC on Saturday, Feb. 2.

The Norse will close out their final home Horizon League contests against Youngstown State on Friday, Feb.22 and Cleveland State on Sunday, Feb.24, followed by finishing the regular season on the road in Michigan against Oakland on Thursday, Feb. 28 and Detroit Mercy on Saturday, March. 2.

The Norse will look to turn things around after finishing 9-22 overall and 6-12 in Horizon League action. NKU’s roster includes nine returners who accounted for 81.9 percent of their scoring from last year. Molly Glick heads into her junior year after averaging 12.4 points per game which lead the team, and Kailey Coffey returns after a stellar freshmen campaign that saw her gather Horizon League All-Freshmen honors while averaging 9.2 ppg and 6.0 rebounds.

This years recruiting class is stacked with local talent and is led by Kentucky Miss Basketball candidate and 10th Region Player of the Year, Taylor Cros, First Team All-State and back-to-back state champion Emmy Souder and two-time First Team All-State Ally Niece. Niece, a former Player of the Year, sat out most of her senior season after tearing ligaments in her left knee, but returned to the lineup for Simon Kenton and helped lead them to an 8th Region championship and an appearance at the KHSAA Girls Basketball Sweet 16 state basketball tournament.

“Our three freshmen, all Kentucky natives with two from right here in Northern Kentucky, are adding some valuable pieces to last year’s roster and I can’t wait to see how we can put it all together,” said Whitaker. “This will be a year of growth and development for our young basketball team, 10 of which are freshmen and sophomores, and I couldn’t be more excited to build and continue our process.”

This years Horizon League tournament will no longer include all 10 conference teams, but will be comprised of the leagues top-eight teams. Motor City Madness will begin on Tuesday and Wednesday, Mar. 5- 6, with the highest seeds serving as host cities, while the semi-finals will be held at Detroit’s Little Caesar Arena on Monday, Mar. 11, followed by the championship game on Tuesday, Mar. 12. You can catch the Horizon League tournament on either ESPN3 or ESPN +, while the championship game will be broadcast on ESPNU.