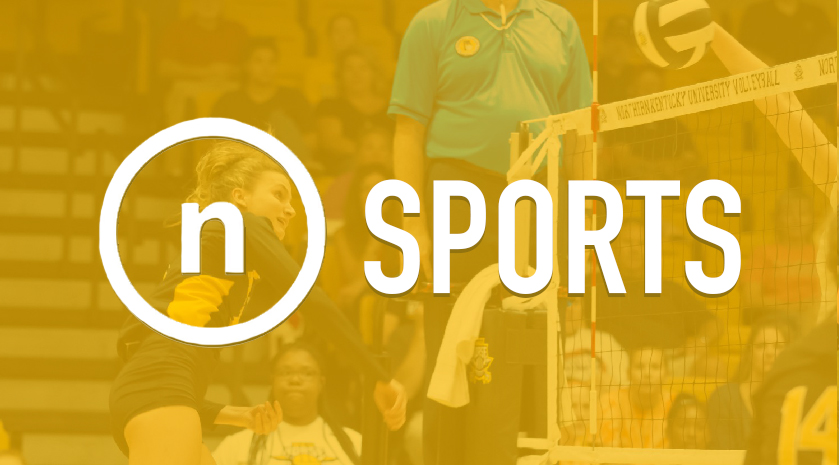 The NKU women’s volleyball team was on the road last weekend facing off against Milwaukee on Friday and the University of Wisconsin-Green Bay on Saturday.  Both matches resulted in a loss for the Norse with a score of 3-2 against Milwaukee and a score of 3-1 against Green Bay. The Norse fall to 13-8 overall and 5-5 in conference play.

The first set saw a strong performance from the Norse’s defense and middles.  The Norse were able to gain an early 6-1 lead over the Panthers. The Norse maintained this lead throughout the entire set and never trailed against the Panthers.  Natalie Hardig led the Norse with a total of four kills; she also had an assist on all three of the Norse blocks. Shelby Olsen set the pace for the defense gaining eight of the Norse’s 28 digs.

The Norse were in the lead for most of the second set before the Panthers bounced back to take the advantage, 17-16. From there the score was back-and-forth before the Norse rallied together to finish the set.  Match point was earned for the Norse after a block from Anna Brinkmann and Bailey Western, and the set was ended by a kill from Laura Crawford.

During the third set, the Panthers managed to establish an early cushion that the Norse were unable to overcome.  Both Libs and Western were able to set the pace for the Norse offense by gaining six kills each.

The fourth set featured a high amount of termination from both teams.  They each had a high number of hits throughout the set, with Haley Libs leading the Norse in kills with seven for the set.  The set had a relatively low number of digs for each team; Ashton Terrill led the Norse in digs with four during the set.

The final set of the match had a low number of hits for both sides.  The Norse had a total of four hits with Libs and Brinkmann having the two hits each for the set.  The set was ended with a 7-1 run from the Panthers to bring the score to 10-15.

The first set of the match was pretty evenly matched until a pair of hitting errors and an ace put the Phoenix ahead at 15-11.  This gave them momentum to take the first set. The Norse offense was led by Libs who had four kills. She and Olsen led the offense with six digs followed closely behind by Terrill and Brinkmann with five.

The second set started off with Libs putting away three kills within the first seven points.  This helped the Norse gain an early lead; the Norse offense continued to score points as they racked up 19 kills with just one error.

The third set had the Norse up for most of the set, with a score of 17-10 at one point.  However, the Phoenix fought back and were able to tie the game and eventually take the set.  The Norse offense was led by Brinkmann, Hardig, and Miranda Wucherer with three kills each, while the Norse defense was led by Terrill with eight digs and Libs with seven.

The final set of the match started off with a 7-0 run from the Phoenix.  They maintained this lead throughout the set before finishing it at 25-17.  Western led the Norse in kills with four during the set, and Terrill led the defense with 11 digs.

The Norse return home this weekend to face off against IUPUI on Saturday, Oct 27 at 4 p.m. followed by their Pink Game on Sunday, Oct. 28 against Wright State starting at 2 p.m. Saturday’s matchup against IUPUI will be broadcast on ESPN+ while Sunday’s matchup against Wright State will be broadcast on ESPN 3.