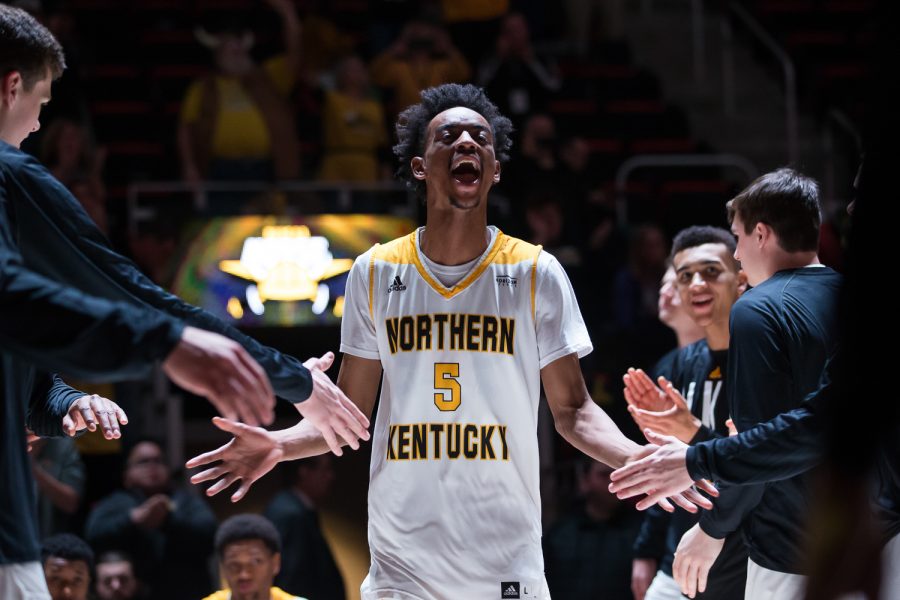 Jalen Tate (5) gets introduced before the game against Cleveland State at Little Caesars Arena.

The NKU men’s basketball team put the final touches on their 2018-19 season schedule on Wednesday afternoon. The schedule, which features 17 regular-season home games at BB&T Arena, will start on Tuesday, Oct. 30 when the Norse host Division III rival Thomas More in their only exhibition match of the season, followed by their regular season kick-off matchup against Wilmington College at home on Tuesday, Nov. 6.

“We are excited to announce our 17-game home schedule for this year,” head coach John Brannen said. “This year’s home schedule accomplished this and brings perennial NCAA tournament teams as well as several programs picked at the top of their respective conferences to BB&T Arena.”

Following their home opener, the Norse will hit the road to DeKalb, Illinois as part of a home-and-home series against Northern Illinois on Nov. 9 and return to the BB&T Arena to host Wabash College on Sunday, Nov. 11.

The Norse previously released their non-conference home, multi-team tournament schedule to take place at BB&T Arena on Nov. 16-18. The three-day tournament will feature mid-major programs such as UNC Asheville, Coastal Carolina and Manhattan. All three teams have played in the NCAA tournament in the past four seasons and are no strangers to success.

In addition to their weekend tournament, the Norse’s non-conference schedule includes trips to the University of Cincinnati (TBD), Central Florida (Nov. 24), Morehead State (Nov. 27) and Eastern Kentucky (Dec. 8), as well as home matchups against last year’s NCAA tournament darlings: the University of Maryland-Baltimore County (Nov. 30), regional foe Miami of Ohio (Dec. 16) and a return meeting with Northern Illinois (Dec. 20) to wrap up their non-conference schedule.

“It has always been our goal to prepare our team for the rigors of Horizon League play by challenging ourselves in the non conference,” Brannen said.  “We will need all of Norse Nation to come out and support this year’s NKU men’s basketball team.”

The Norse will host IUPUI and UIC on Friday Dec. 28 and Sunday Dec. 30 to kick off their Horizon League conference schedule, followed by four out of five games on the road.

The defending Horizon League regular-season champs will head to the Motor City to do battle with Oakland (Jan. 3) and Detroit Mercy (Jan. 5), then return home to take on league rival and last years conference tournament winner, Wright State (Jan.11). The Norse will then travel to Northeast Ohio for matchups against Cleveland St (Jan.17) and Youngstown St (Jan.19).

Green Bay (Jan. 24) and Milwaukee (Jan. 26) will close out the month of January in Highland Heights, followed by the Norse traveling to IUPUI (Feb. 1) and UIC (Feb. 3) to begin the final month of regular season play.

Fans and alumni will celebrate this year’s homecoming week on Thursday, Feb. 7 and Saturday, Feb. 9 as the Norse welcome Detroit Mercy and Oakland to the BB&T Arena.

The Norse will then hit the road to Dayton, Ohio to complete their regular season series with Wright State (Feb. 15), before heading home to square off against Youngstown St. (Feb. 21) and Cleveland State (Feb. 23) to close out their final home Horizon League contests.

The regular season comes to a close for the Norse after a trip to the badger state for matchups against Milwaukee (Feb. 28) and Green Bay (Mar. 2).

The dates and bracket for the 2019 Little Caesars Horizon League Men’s Basketball Championship will also be released at a later date.

ESPN+ and ESPN3 will be the home for the Horizon League’s live streaming game content. Full television information and start times will be announced on Tuesday, Sept. 11.

The Norse will look to make it three straight 20-win seasons when they are led by senior forward and recent gold medalist, Drew McDonald, who averaged 17 points and 9.6 rebounds per game last season. His 18 double-doubles ranked 11th nationally in Division I last season.

Returning to the Norse is one of the league’s top defenders, Jalen Tate, alongside key returnees, Tyler Sharpe and Dantez Walton.