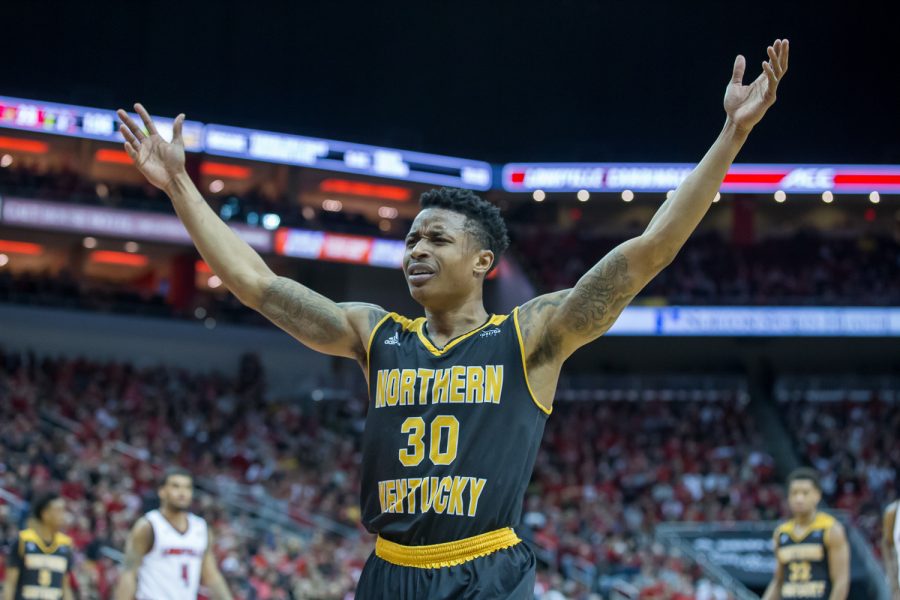 Lavone Holland II (30) reacts to a call during the game against Louisville.

The Suns were founded in 2016 and entered the Dutch Basketball League, the highest level of men’s professional basketball in the Netherlands, in the 2017-18 season.

Holland becomes the second Norse in less than a week to be signed to a professional basketball league contract. Forward Jordan Garnett signed to Cyprus team Omonia Nicosia Aug. 25.

“Lavone can handle both guard positions well, has length, scoring ability and is versatile,” said Suns head coach Peter van Noord. “We were looking for such a type of player and think we have found the right man in Lavone. He is creative and complementary to the Dutch core we have and has a good shot coupled with speed and we are looking forward to next season.”

Averaging 13.8 points per game and a team-high 140 assists last season, Holland graduated 19th all-time in scoring (1,250) and was the only player in the Horizon League to average double-digit scoring and more than four assists and four rebounds per game. He also became the 27th member of NKU’s 1,000-point club when he hit a jumper at the top of the key against Oakland.

Like Garnett, Holland played an integral part in the Norse’s initial success during its first two years of eligibility in Division I status. He helped lead the team to a Horizon League regular season and tournament championship, an NCAA tournament appearance against Kentucky and an NIT appearance against Louisville. No other program has achieved this amount of success in their first two years of of Division I play.

Lavone Holland II for the Norse