Brannen to lead Norse through 2022 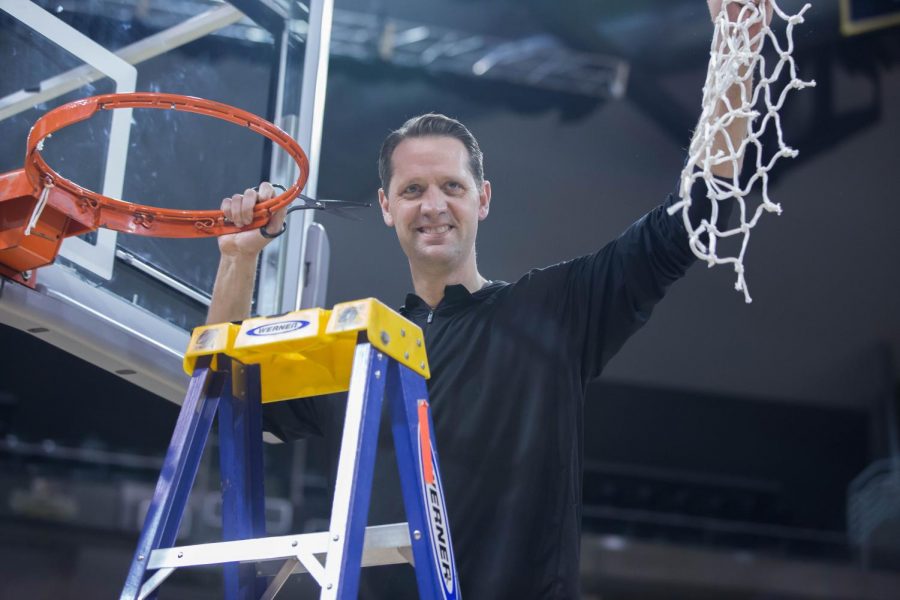 Head Coach John Brannen holds up the net to the spectators in BB&T Arena.

Norse men’s basketball head coach John Brannen signed a contract with NKU Athletics Friday that keeps him at the helm through the 2021-2022 season.

“It is truly an honor to arrive on this campus every day as the head men’s basketball coach and represent the Northern Kentucky/Greater Cincinnati community,” Brannen said in a press release on Friday.

The new contract increases his salary to $370,000 for this season, according to Assistant Athletic Director Bryan McEldowney. Brannen previously signed a four-year contract in 2017 to stay on through the 2020-2021 season and earn $300,000 during the 2017-18 season.

Brannen has amassed a 55-42 overall record and 32-19 mark in the Horizon League in three years of coaching. Notably, he led the Norse to the Horizon League Championship and the NCAA Tournament in 2017, the program’s first year in Division I.

In 2018, the team had the best record in the Horizon League (15-3) and played University of Louisville in the National Invitation Tournament.

“We are certainly excited to reach an agreement to extend John as head coach of our men’s basketball program for four more years,” said Director of Athletics Ken Bothof in the release.

“Not only has the program reached unprecedented heights on the court the last two years, but the men’s basketball program under John’s leadership has demonstrated equivalent success in the classroom and service in the Northern Kentucky community.”

This story will be updated.