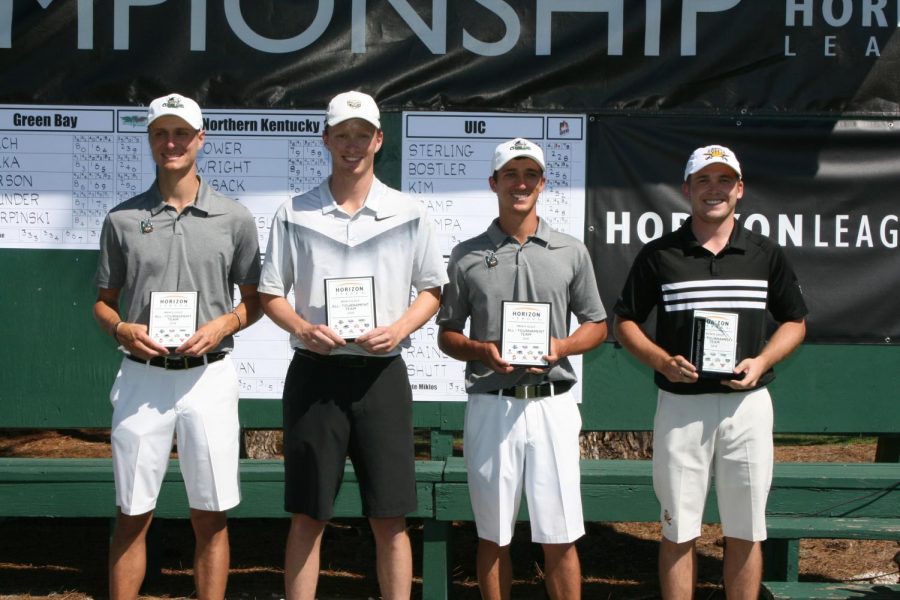 Provided by the Horizon League

Howey-in-the-Hills, Florida—Jacob Poore started the day with a two-stroke lead; the Northern Kentucky University men’s golfer carded a final round one under par 72, which won him the 2018 Horizon League Tournament Individual Championship.

“I’ve always thought that he would win before he graduated,” said Daryl Landrum, head coach. “He’s great player that works hard to succeed.

Poore, who picked up his seventh top ten finish of his career, entered the final round with a six-shot lead over Anton Krecic of Cleveland State and the 38 other golfers.

“I knew going into the last round I needed to keep the same mindset as I did the first two rounds,” Poore said. “I had to go up against some really good golfers and I couldn’t afford to make many mistakes. Overall, I knew if I kept the ball in front of me and just continued to hit the ball like I did the first couple of rounds, I had a good shot.”

Coach Landrum encouraged Poore to continue attacking the golf course prior to tee-off on the final day, but made a promise that he wouldn’t let him know how he was holding onto the leaderboard until it was time.

“He just needed to play the course his way and not change anything,” Landrum said. “He didn’t know how he stood until the last green.”

The Ryle High School graduate and First Team All-Horizon League honoree dominated the back nine; he shot 3 under par over the course of three rounds and entered the final hole with a comfortable seven-shot lead.

“On my tee shot, I wanted to get it in play and just cruise on in from there,” Poore said.  “After I found my ball in the bunker, punched out into the fairway and hit the ball on the green, I felt very comfortable and was finally able to relax a little bit knowing the job was finished.”

This marks the first career victory for the Union, Kentucky native, finishing the tournament with a three-day total of 212 (69-71-72) and 12 birdies (more than any other player on the field) at the par-71 El Campeon Course.

“Everyone on our team will now know that it’s possible,” Landrum said. “He has moved the bar for us to the next level.”

The Norse nabbed a fifth place finish in the team standings and posted a three-day score of 915 (+63) while Cleveland State won the team title with a three-day total of 889 (+37).

“Both teams have had some great battles but just couldn’t pull off the win,” Landrum said. “But we needed everyone to know that we could win and earn some respect in the league.”

As a result of winning the Horizon League Individual Championship, Poore has qualified for the NCAA Regionals, May 14-16 at Karsten Creek Golf Club in Stillwater, Oklahoma.

“This is what I have been preparing for,” Poore said. “I will be going up against some of the top collegiate golfers in the country and hope to keep playing solid golf.”

Poore will learn his NCAA fate at 5:30 p.m. EST Wednesday, May 2 during the Men’s Golf Selection Show on the Golf Channel.