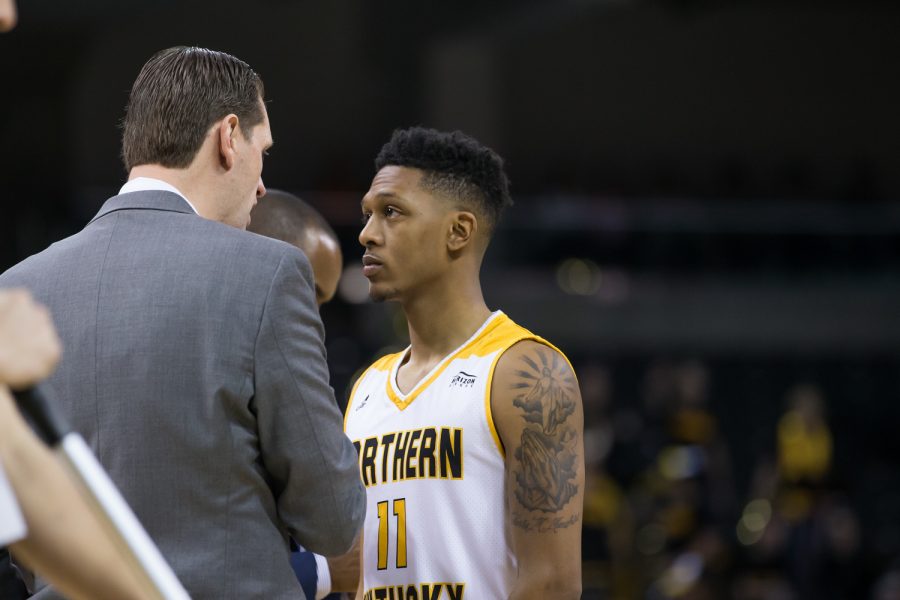 This off-season should prove to be a period of change for the Norse, with many members of the team leaving the roster.

Williams’ transfer left a scholarship spot open, which was  awarded to Tyler Sharpe, a transfer from Louisville. Sharpe announced this on his Twitter account.

On Wednesday afternoon, another domino fell, as NKU announced the release of sophomore guard Mason Faulkner. He averaged 6.5 ppg this season and was the runner-up for Mr. Kentucky Basketball in 2016.

Toward the end of the season, Faulkner lost playing time with a combined seven points in his final six games.   A few times during the season, Coach John Brannen said that he wanted to see more for Faulkner.

Faulkner appeared to be in line to take Lavone Holland’s spot as starting point guard, but now the Norse are left with just two starters from last year’s squad (Drew McDonald and Jalen Tate).

While the Norse are losing several members, they’ve gained a new commit.  Adrian Nelson, who decommitted from Detroit Mercy, signed with NKU on Tuesday. The shooting guard will join other incoming guards Trevor Faulkner and Bryant Mocaby on the roster, as well as returning guards Tate and Sharpe.

Along with the transfer of Williams and Faulkner, Director of Basketball Operations Tony Rack is also moving programs. Rack will become an assistant coach at Western Carolina.

Really excited to get started at @WCU_MBB and work for @MarkProsser15. There is no one better.

That being said I would like to thank Norse Nation for everything they did for me over the past decade. As they say, there is no place like home. #NorseUP pic.twitter.com/ylEu3yfjD9

In a statement on Twitter, Rack said that NKU will always be home to him.

“The success on the court and in the classroom will only continue. I wholeheartedly believe that,” Rack continued in the statement.

A scholarship was also awarded to NKU women’s basketball freshman forward Kailey Coffey, who was arguably the most consistent player on the team.

Coffey started all 31 games for the Norse and scored 9.2 ppg and led the team in rebounding, grabbing 6.0 rpg. Coffey was one of the Horizon League leaders in offensive rebounds, finishing seventh in the league in the category.

“I am extremely proud of Kailey and her accomplishments on and off the court,” head coach Camryn Whitaker said in a statement. “She is a tireless worker and has earned everything she’s achieved in her time at NKU so far. I look forward to coaching Kailey over the next three years and I’m excited for her to be on full scholarship.”