With Williams transfer, where do the Norse go from here? 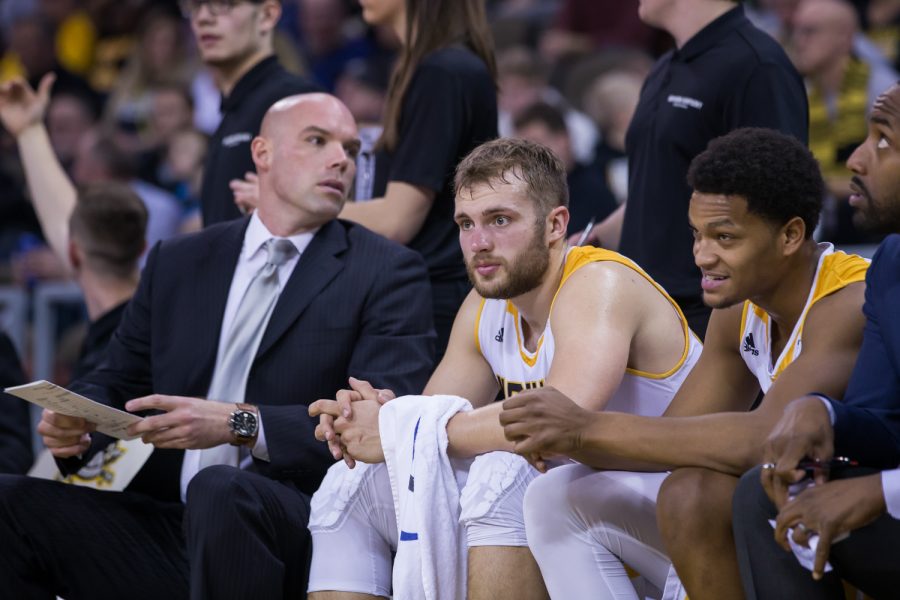 Carson Williams (23) watches on during the game against Wright State.

When NKU takes the court next fall, they’ll do so without senior starters Jordan Garnett and Lavone Holland II. More unexpected is the release of sophomore forward Carson Williams.

Williams was granted his release from the university on Friday, confirmed by Bryan McEldowney, director of communications for NKU Athletics.

“Sometimes places aren’t the best fit and sometimes you feel like you need a new, fresh start,” Williams said.

Williams said his teammates were supportive of his decision.

“The guys here are really great,” Williams said. “It is like a family and your family will want what’s best for you.”

The athletic department hasn’t commented on Williams’ decision to transfer.

Williams started the season strong, notching five 20-point performances in the first 15 games of the season. His scoring statistics fell off for the rest of the season, however, moving from 15.5 ppg in mid-December to 12 ppg at the end of the season.

Williams is the fourth player to transfer or leave the program in the last two years; Brennan Gillis and Brandon Maxwell transferred at the end last season. Blake Spellman was released in January 2017.

None of those players were as skilled as Williams, who was able to finish at the rim whenever he wanted to. He was top 20 in the country in field goal percentage and finished the season shooting 60.8 percent. He also showed his ability to run the floor many times last season and provided electric dunks as well.

The decision by the university and head coach John Brannen to not so much as release a statement on the transfer is odd. Statements were released when the previously mentioned Gillis and Maxwell decided to transfer.

“I’d like to thank both Brennan and Brandon for their contributions to NKU men’s basketball,” Brannen said in a statement about Maxwell and Gillis at the time. “I wish both of them nothing but the best in their future endeavors.”

Yet, several days after Williams decision to transfer was confirmed, NKU Athletics is silent.

Regardless, the transfer leaves question marks all around the Norse from a basketball standpoint.

The transfer leaves NKU with two starters remaining from last season: Drew McDonald and Jalen Tate.  Due to his rebounding ability, Walton is the likely candidate to take over Williams’ starting position.

Next season, Jeff Garrett could begin playing important minutes for the Norse. Chris Vogt could also begin to play, shifting McDonald to the four. Junior college transfer Silas Adheke is another contender for Williams’ spot depending on how things go in the off-season.

With Holland having played his last game as the Norse point guard, another big question looms over the program heading into next season: What do the Norse do at point guard?

The simple answer would be current sophomore Mason Faulkner, who for most of two seasons came off the bench when Holland needed a break. Faulkner, however, played poorly down the stretch, playing just 11.5 minutes per game and scoring a combined seven points in the final six games of the season.

For the season, Faulkner scored 5.6 ppg, down from his freshman average of 7.4 ppg. His minutes are also down from a season ago. Turnovers have been an issue for the guard as well, giving up the ball 44 times last season.

During NKU’s NIT matchup with Louisville, Tate ran point at times, something we hadn’t seen much of during the regular season but something they may develop in the offseason. NKU also signed guards Trevor Faulkner (this year’s Mr. Kentucky Basketball) and Bryant Mocaby, who could fill roles as freshman at the guard position.