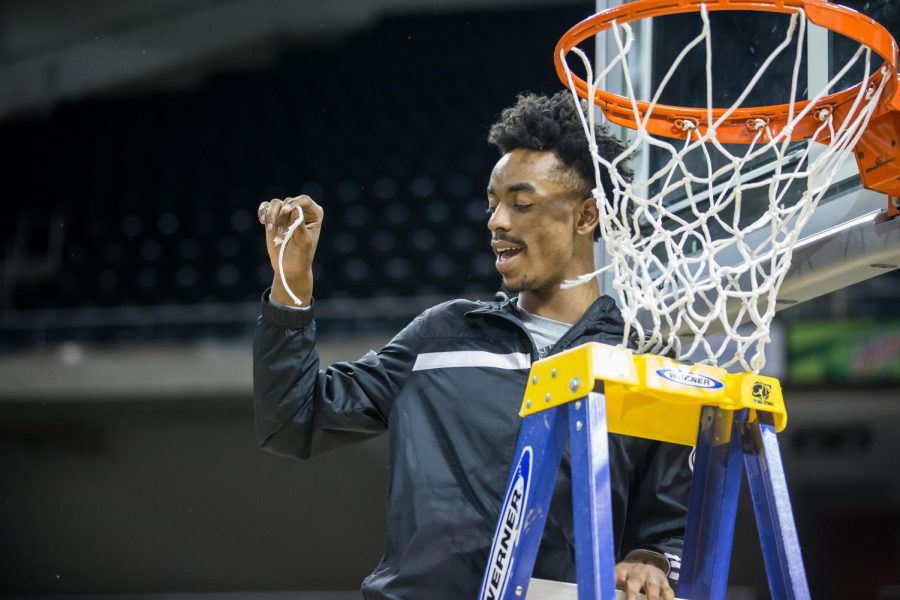 Jalen Tate (5) shows off his piece of the net after the men secured 1st place in the Horizon League.

Last season, Jalen Tate was just along for the ride as the NKU men’s basketball team advanced to the Horizon League championship game.

Tate received medical redshirt last season after injuring his hand after just eight games. For the rest of the season, he watched from the sidelines as his teammates battled their way to the school’s first Division I conference championship.

This season has been a learning experience for Tate, who had to put into practice what he learned from watching on the sidelines last year.

“It was like hitting the reset button after I got hurt last season,” Tate said. “It was almost like a blessing because I had to learn a lot.”

In his first full season, Tate has started all but one game and has anchored a defensive unit that has allows just 65.2 ppg, the best in the Horizon League. The Norse defense was ninth in the country in three point defense, 23rd in field goal percentage defense and 33rd in total steals.

Tate finished the season sixth in the Horizon League with 41 steals, often guarding the opposing team’s best perimeter player. As the Norse prepared for practice on Wednesday afternoon, news broke that Tate was named to the All-Freshman and All-Defensive team in the Horizon League.

“He really gets us going on that side of the ball,” junior Drew McDonald said. “You know what you are going to get with Jalen every time he steps out on the floor. Offensively he makes great reads.”

The defensively-minded nature of this team is a main reason why they were able to claim Horizon League regular season title and the first seed in the Horizon League tournament, which starts on Friday.

The Norse will begin defending their Horizon League tournament title on Saturday against either Youngstown State or Cleveland State. While this will be Tate’s first go-around in the event, seven Norse who played in last year’s championship team will return to the tournament this season.

“Experience is always a good thing in any environment you walk into,” John Brannen, head coach, said. “Even in the regular season, different circumstances take place the last five minute and the end of the first half. Relying on those guys to say, ‘Okay, we understand what we need to get done here let’s make sure we do it,’ is comforting from a coaches standpoint.”

McDonald says looking at pictures of last year’s celebration helps drive the desire to win the tournament again this year.

“We know what it feels like,” McDonald said. “We know what that moment is to cut down the nets and hold up the trophy. For the guys returning, that motivates us to get back and go further this year. But it’s one step at a time. We have to win the first round game first.”

While he has watched film on both opponents, Brannen described the situation as unique.

“We are going to work on ourselves,” Brannen said. “There’s areas we need to work on and prepare for Saturday. We’ll implement things that we need to get better at this week.”

NKU’s road to the finals

NKU will take the court on Saturday at 8 p.m. at Little Caesars Arena in Detroit for their quarterfinal game against the winner of Youngstown State/Cleveland State, both teams the Norse swept during conference play.

If they win, the Norse would take Sunday off and play the winner of five seed IUPUI/four seed Oakland on Monday before the finals on Tuesday. NKU defeated IUPUI handily in both matchups this season while splitting the season series with Oakland.

Guards Martez Walker and Brailen Neely both are out for the season with injuries.

The easiest path for the Norse would be Cleveland State and then IUPUI. Even though the Grizzlies have struggled lately, they are still a dangerous team with Kendrick Nunn on the floor.

Here are the Horizon league probabilities for your approval. 13 down, 19 to go. pic.twitter.com/wZark8gpVc

Two weeks ago, NKU was not playing their best basketball. Brannen even said as much in his post game press conferences and again on Sunday during their net cutting ceremony. The Norse took a huge step forward in defeating UIC 79-72 and IUPUI 75-56.

Northern Kentucky was able to control the tempo in those final two games, more so than in the loss to Wright State and the three previous victories over Youngstown State, Green Bay and Milwaukee.

The key to Norse success is controlling the pace of play. Teams have attempted to slow down and play half court basketball against NKU, who score 78.1 ppg and had been scoring 80.1 ppg at the beginning of conference play.

During Wednesday’s press conference, Brannen said that he believes teams game plan for NKU differently than any other opponents, forcing the Norse to make a lot of in game adjustments.

If NKU can force their will and play fast paced basketball and put together a full 40 minutes of basketball, the Norse should make it to the Horizon League finals.

The Norse might face Oakland in the semi-final game. While Kendrick Nunn is capable of scoring 30 points on any given night, injuries to Martez Walker and Brailen Neely have severely hampered the Grizzlies. IUPUI would be the ideal matchup, but I believe NKU would also be able to get past Oakland to the finals.

The biggest hurdle for the Norse would potentially come in the championship game if they play Wright State. The Norse haven’t found an effective was to stop Loudon Love and for the Norse to win, they need to get Love in foul trouble and frustrate him down low.