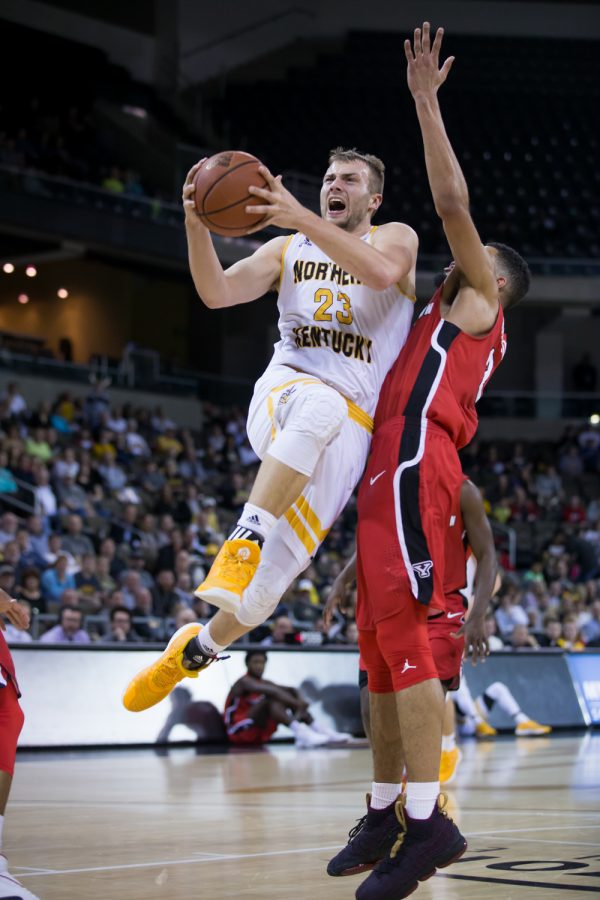 Carson Williams (23) goes up for a shot during the game against Youngstown State.

Lavone Holland II was on his game Friday night, scoring 25 points to lead all scorers and grabbing six rebounds and dishing out three assists. Carson Williams scored 14 points off the bench and chased down six rebounds. Nine different Norse scored in the game.

Dixson scored nine points in the first half.

UIC started the second half on a 14-2 run, cutting the Norse lead to 43-40 with 16 minutes remaining in the game. NKU would keep the lead between three and six most of the second half until the six minute mark, when UIC tied the game at 61.

“@atmcdonald33 came out of the locker room and couldn’t see out of one eye. We drew up a 3pter and he hit it. We’re unconventional some times.”@coachbrannen @NKUNorseMBB

However, back-to-back threes by McDonald and Garnett put the Norse up six with 4:25 remaining. The Norse sustained one more run from the Flames, but an and-one basket by Drew McDonald with 1:32 remaining would give the Norse the momentum.

The Norse will look to wrap up the Horizon League regular season title on Sunday when they face IUPUI in Indianapolis. The Jaguars defeated Wright State earlier in the day on Friday and have won four of their last five games.

A win secures the first seed in the Horizon League tournament for NKU. If NKU loses, they would need UIC to beat Wright State to remain in first place.

Tip-off is scheduled for 1 p.m. and will be available on ESPN3 and on ESPN1530 on AM radio.