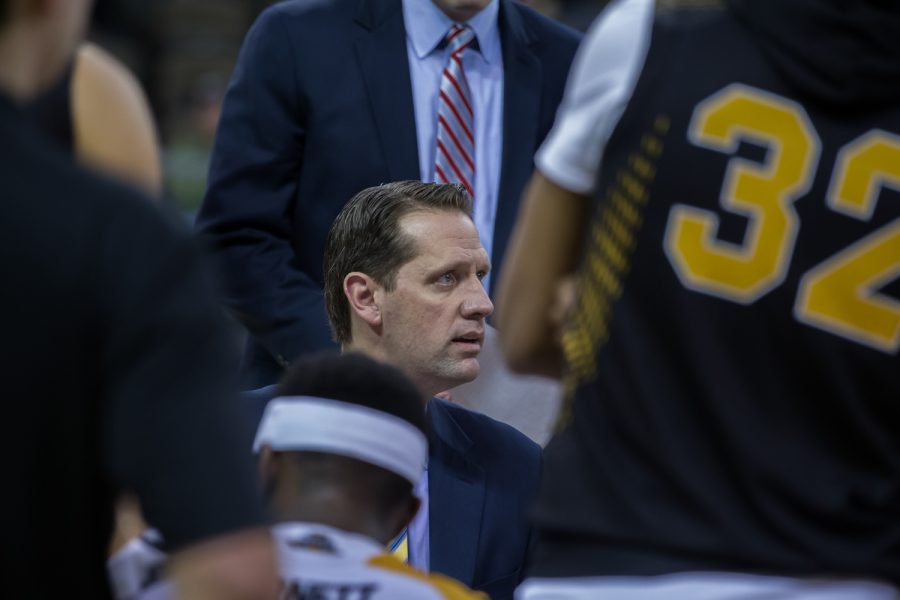 Head Coach John Brannen talks to his team during a timeout in the game against Cleveland State.

The Northern Kentucky men’s basketball team fell short against Oakland University Friday 83-70. The Norse are now 14-7 on the season and 7-2 in the Horizon League. Oakland is now 14-8 with a conference record of 6-3.

The Norse are still second in the Horizon League standings behind Wright State with the Grizzlies not far behind in third place.

The score reflected the struggles that Norse had throughout the game. The Norse had 11 turnovers in the game resulting in fouls at the other end, sending Oakland to the line 24 times. Both teams shot 66.7 percent from the line, but NKU shot only 15 times from the charity stripe.

McDonald, who was 6-17 from the floor, is already looking forward to the next game on Sunday. McDonald is confident in his team and said they are going to fix some things and go back to the drawing board for the next game.

At times, John Brannen, Norse head coach, looked frustrated with how his team was playing, but he gave Oakland credit for their teamwork and how Kendrick Nunn played.

“He’s really hard to guard because you have to put a lot of pressure on him,” Brannen said. “They have three of the top scorers in the country and they are all fifth-year seniors. They are really good.”

The Norse shot 42 percent in the game and forced 12 turnovers which resulted in 18 points. Oakland shot just over 50 percent.

Dantez Walton had 13 points off the bench with five rebounds, McDonald finished the game with 19 points and nine rebounds.

Mason Faulkner had 15 points and five assists. Lavone Holland ll finished with nine points. Jeff Garnett had two points but his defense on Nunn was very well. Eight Norse ended the night with a basket.

From the beginning, Oakland gets the tip-off and scores the first basket. Kendrick Nunn scored 11 points for Oakland in the first five minutes of play. NKU were always trying to catch up to Oakland. Norse would score and then Oakland were score; trading baskets.

“[Dantez Walton] Walt played well off the bench. He gave us great minutes. Probably was his best game of the year. He helped us stay in the game for a while” McDonald said. There were times when he would score that picked up the momentum for the Norse, he was the energy Norse needed. But even with Walton’s help the Norse still came up short.

At the end of the first half the score was 32-36 Oakland. In the second half Norse came out strong with three consecutive baskets. Then, Nunn took over with the help of Hayes and began to make three-pointers and contested shots.

The night was filled with intensity and emotion, but towards the end NKU could not catch up to Oakland. The momentum was taken over by Oakland throughout the game and not one Norse member could stop it.

When it seemed like Norse would come back, Nunn would drain a three-pointer. NKU had a better second half shooting wise, but ultimately could not pull off the win.

The Norse will play this Sunday at BB&T Arena at 1 p.m. against Detroit Mercy and then will go on the road playing against Youngstown State and Cleveland State.