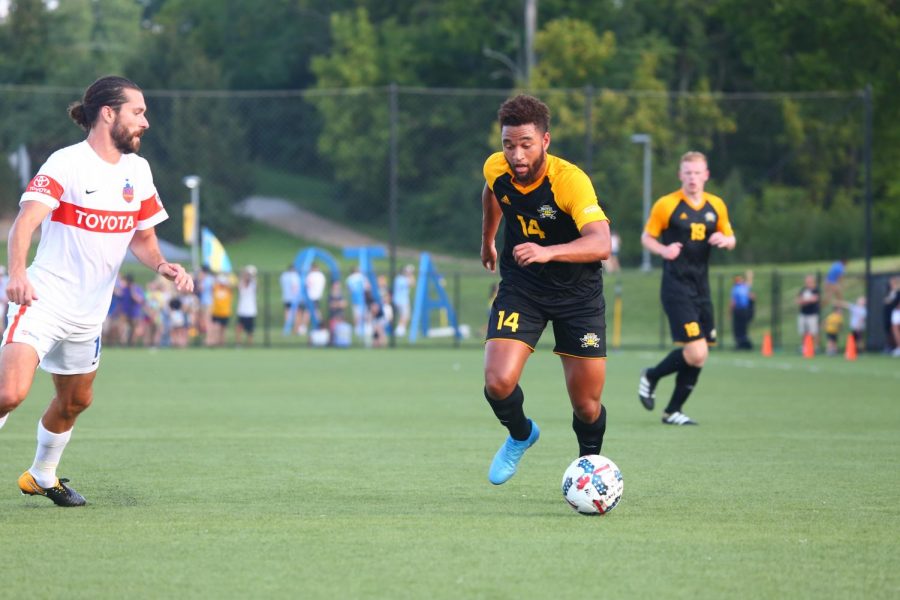 When Blaire Stevenson, assistant men’s soccer coach, joined the Norse in March of 2017, he brought not only a rich history of the game, but a connection that would soon benefit his newly found home. That Connection? The FC Cincinnati soccer team, which would lead to to three exhibition games in two years.

When Stevenson joined the team, they were able to meet with the FCC administration and coaching staff, said Stu Riddle, NKU head coach.  Stevenson’s relationship can be traced back to his college days, where he played with the now-vice president of operations of FCC: Dan McNally.

“The club has been very good with us. They wanted to make an effort to make us better,” Riddle said.

FC Cincinnati, a professional soccer franchise that became a highlight of 2017, will enter Norse Nation on Feb. 27 at 7 p.m., which will mark their first game in the Cincinnati area of 2018.

This will be the third time the two teams battle it out at the NKU Soccer Stadium. The first time was behind closed doors in the spring of 2016. Last August, the club came back with their reserve team in an exhibition game concluding in a 1-1 tie.

Scouting is one of the biggest challenges going into the match, Riddle said. The solution to this problem is to focus on the strengths the Norse had last season.

“One of the things they asked for is no streaming, so we don’t know if we can watch any of their matches from Florida before coming here or when they play in Indianapolis,” Riddle said.  “It’s going to be so tough for us because their roster is so different this year and might be playing a different way.”

With this being FCC’s first game of the year, Riddle and his team expect a packed house.

“I think a lot of people will show up because they miss them and haven’t seen them in the past four months,” said Riddle. “They have a huge following, sold over 15,000 season tickets…so if we get ten percent of those ticket holders, we will be in good shape.”

Being chosen as the first team to welcome FCC back to town is nothing but respect said Riddle.

“The fact that they picked NKU out of all the schools around shows how much respect the club has and the type of relationship that has been established,” said Riddle.

NKU goalkeeper Jim Barkei, a redshirt senior, said you live for these kinds of moments, especially against a rising team like FCC.

“As a player, you just look forward to those kind of environments…you have a chance to prove yourself against a pro side potentially could have the expansion bid in the next few years to go to MLS,” Barkei said. “You go in there in awe a little bit of the players but then you know they are just players just like us on the field.”

Tickets for the match will go on sale Jan. 29 on Ticketmaster or at the BB&T Arena box office. Tickets are $5 for general admission, and free for NKU students (up to 100).

Kickoff will be at 7 p.m. at the NKU Soccer Stadium. Gates open one hour before kickoff and parking will be available in Lot O and the Welcome Center Garage.