Gallery: Norse get back on track with victory over Cleveland State 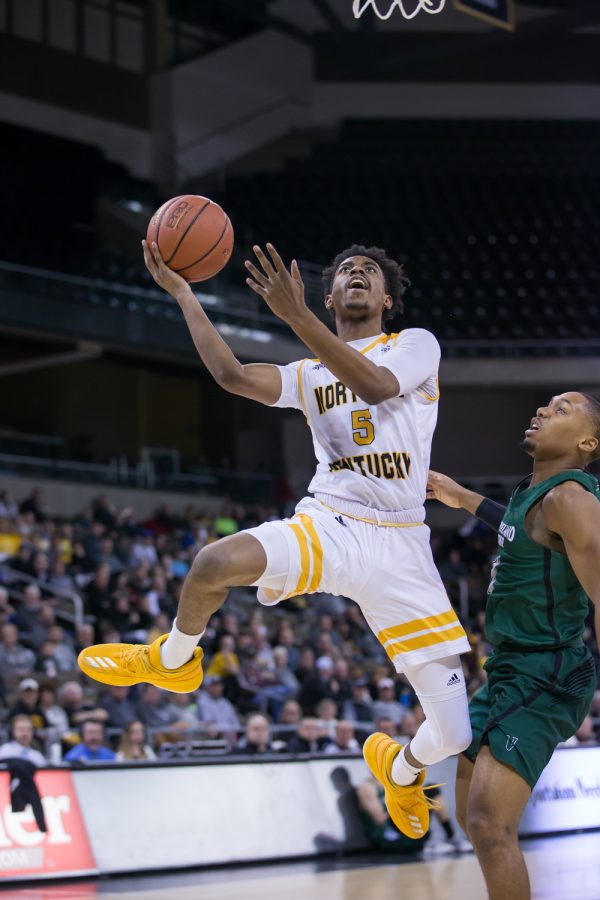 Gallery|11 Photos
Colin Johnson
Jalen Tate (5) goes up to shoot in the game against Cleveland State.

The Northern Kentucky men’s basketball team defeated Cleveland State 70-55 Monday night in BB&T Arena. The Norse improve to 12-6 on the season and 5-1 in Horizon League play while Cleveland State falls to 4-15 and 1-5 in conference play.

The Norse remain in second place in the Horizon League standings behind Wright State, who remains undefeated in conference play, while the Vikings sit at last place.

While the score might say differently, the Norse didn’t play that well in this game. NKU missed open shots in the paint and their free throw shooting, 13-20, was less than stellar.

“We did some good things. We had spurts where we played well,” junior Drew McDonald said. “I feel like we aren’t clicking at full force right now. We aren’t the best team we can be, but that’s fine because our goal is to play our best basketball in March.”

McDonald, who was 6-17 from the floor against Wright State, was just 4-14 from the field Monday night. While the shots aren’t falling, McDonald still says his confidence remains high.

“[Teammates] are giving me confidence and keep feeding me the ball in the post and the perimeter,” McDonald said. “The shot feels good, they just aren’t going in. They are hitting the back iron and rattling in and out. I’m just looking to share the ball a little more right now until I get clicking. When you have great players around you, you rely on them a little bit more.”

At points, head coach John Brannen became frustrated with his team. In one particular huddle in the second half, his agitation was visible.

“I felt like I was dragging them up the mountain,” Brannen said. “I felt like we were moody and didn’t have the energy that we needed to have. My frustration today in the huddle was that of capture playing together, enjoying the moment. Lets play well and not worry about the score.”

The Norse shot 44.6 percent in the game and forced 16 turnovers, which they turned into 25 points. Cleveland State shot just 37 percent from the field but their bench did produce 28 points.

Faulkner scored 16 points off the bench for the Norse and came up with three steals. McDonald finished the night with 14 points and dished out five assists.

At the start, they were shooting 30 percent and early in the first half the Norse were 3-8 from the free throw line. Cleveland State and NKU were tied at 15 with 6:38 left until Faulkner entered the game. Faulkner made a layup and then hit back to back threes to give the Norse a 23-17 lead.

“Mason Faulkner and Tyler Sharpe came off the bench with tremendous energy,” Brannen said. “When you are in lulls offensively like that or lulls energy wise you need a pickup from the bench.”

From there, the Norse were able to gain some momentum with two more threes by Sharpe and free throws by Lavone Holland and McDonald to give NKU a 37-21 lead. The Norse held the Vikings to 0-11 from three in the first half.

“That’s something we put a lot of focus on,” Williams said. “We knew their main scoring threats came from the perimeter.”

After giving up the first two Cleveland State baskets, the Norse were able to build a 22 point lead with just under 12 minutes to go in the half. After a brief run by Cleveland State, Faulkner got the Norse back on track with two layups and an assist on a Jeff Garret dunk that put the Norse up 58-33.

Cleveland State found their stroke, shooting 8-14 from downtown in the second half, but it was a little too late. The Vikings would get no closer than 15.

The Norse will hit the road to face Milwaukee on Thursday at 8 p.m before heading to Green Bay on Saturday at 1 p.m..