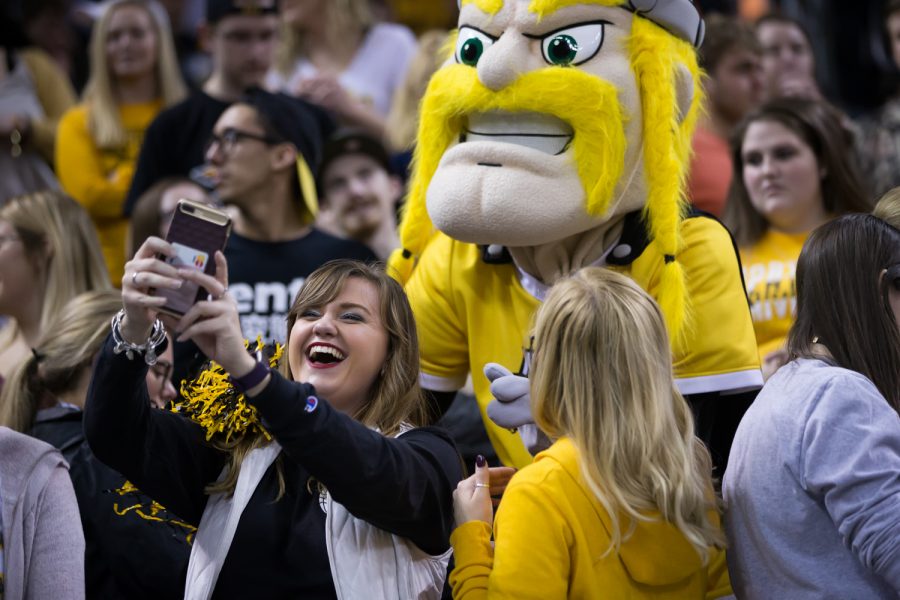 An NKU fan takes a photo with Victor.

There was a time in the not so distant past, as recently as the middle of last season in fact, that the student section at BB&T Arena was mostly empty for NKU basketball games (men’s or women’s).

There are only three times I can remember a sizeable student section at any basketball game last season; when summer orientation leaders were announced, homecoming and the final regular season game against Valparaiso.

However, the atmosphere in the arena on Thursday night when the Norse took on Wright State was the best I’ve witnessed in BB&T Arena in my time covering NKU athletics.

Looking around at the sea of black and gold, I felt for just the second time that NKU was playing big-time college basketball at home.

The atmosphere in BB&T was awesome on Thursday for @NKUNorseMBB ‘s showdown against Wright State, here’s a look back with dunks from Jalen Tate and Carson Williams #NorseUp #TakeNotice pic.twitter.com/ibah6OHHps

I don’t say that because of the talent, because NKU is a talented team, but because the passion that fans bring to college basketball elevates the players on the floor.

The region’s basketball scene is particularly great, with Cincinnati and Xavier both having passionate fan bases that sell out their arenas more often than not.

NKU, in this regard, has played the part of a forgotten step-sibling in the Tri-State area, always overlooked by college basketball fans in this area and even the students attending the university.

Now, that is changing.

Walking around campus, I’ve seen more NKU gear and less gear from other schools. During NKU media day, junior center Drew McDonald said he had seen more excitement and interest in the team before the start of the season.

The sizable amount of students during games against Morehead State and EKU is proof of this, and the lower bowl has been fairly full with community fans all season. But it never felt like it did on Thursday night.

Norse Nation, you were excellent. You were there, loud and rowdy until the very end, even in a loss. Now it’s time to step up.

It’s time to bring this energy to every home game.  The enthusiasm needs to be there if the Norse ever want to be a big-time fan base, and not just during dollar beer night or homecoming.

Despite the loss on Thursday, this is a special team. They have a great chance to win another Horizon League title and earn another trip to the NCAA Tournament. Wouldn’t it be special to witness this team achieve that as a community?