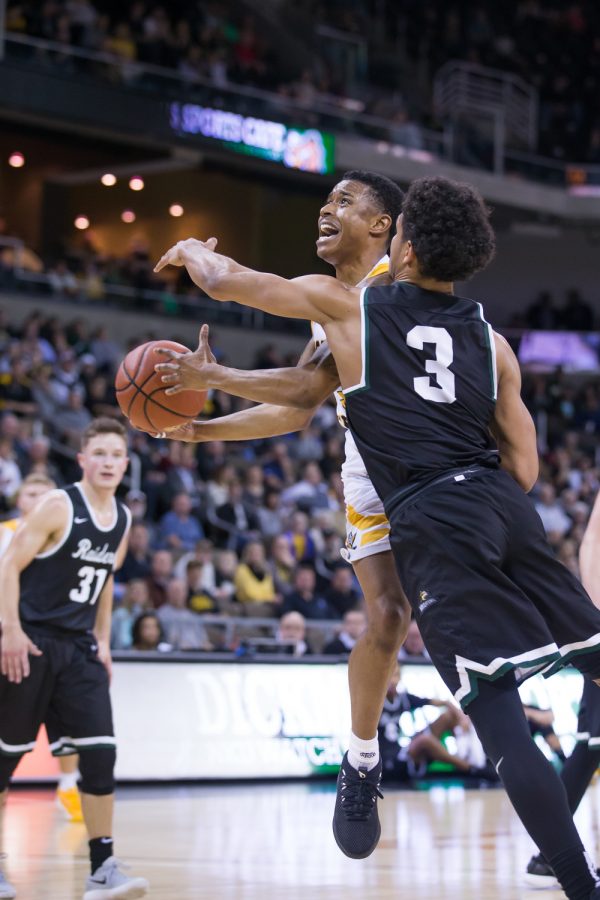 Gallery|13 Photos
Colin Johnson
Lavone Holland II (30) goes up for a lay up in the game against Wright State.

BB&T Arena had not witnessed an NKU men’s basketball loss since Jan. 20, 2017. 5,000 energized fans filled the arena Thursday, hoping they would witness the 14th straight home victory for the Norse.

Instead, they witnessed a career night from Grant Benzinger, who was seemingly unphased by the noise from a full student section and a sold out lower bowl.

Wright State defeated the Norse 84-81, the first time the Raiders beat NKU in four tries. The Raiders are now in sole possession of first place in the Horizon League at 5-0 and a 13-5 overall record. NKU suffers its first loss in league play and are 11-6 overall.

“At the end of the day we just didn’t guard,” NKU head coach John Brannen said. “We preach defensive habits on a regular basis and for some reason those habits didn’t come to light today.”

Brannen said he was worried about this game during the week because of what Wright State brought to the table.

“Their discipline, toughness and execution would be very much a challenge for us and we really hadn’t faced anyone with all three of those things at a high level this season,” Brannen said.

Benzinger had 11 points in the first five minutes of play and was a perfect 2-2 from three. He ended the night with 31 points and shot 4-7 from three. He also grabbed seven rebounds for the Raiders despite foul trouble.

“We didn’t find him in transition. That’s something I should have got across to the guys better,” Brannen said. “He was tougher than we were tonight and he was the best player on the floor.”

With 10:42 remaining in the second half, Drew McDonald tied the game at 57 with a layup. In the next minute, Tyler Sharpe hit a three, the Norse forced a Benzinger turnover and Jeff Garrett made a layup to give the Norse a 62-57 lead.

Just as it seemed the Norse would take control, Mark Hughes made an open layup, which was followed by a McDonald missed three and an Everett Winchester made three, which cut the Norse lead to 62-61.

Benzinger took control from there, making two free throws and a three to give the Raiders a 66-62 lead. Sharpe and Lavone Holland would get the Norse back within one with 4:49 remaining, but Benzinger would answer by scoring the next five points.

The Norse would get as close as three in the closing minutes but would come up short.

Lavone Holland led the way for the Norse with 22 points. Holland dished out five assists and grabbed five rebounds. McDonald followed with a hard earned 18 points and 10 rebounds for his seventh double double of the season.

Carson Williams scored 11 second half points to finish with 13.

Sharpe finished with a career-high in minutes with 23 and scored 10 points. The increase in playing time has been something that has been coming for a while, according to Brannen and Holland.

“What you’ve seen from him tonight is what we see from him in practice,” Holland said. “That’s the reason he’s finally getting minutes. He consistently does that in practice and he just has that competitive edge that fits well with our program.”

Loudon Love scored 17 points and tracked down 10 rebounds. Hughes and Winchester both scored 10 points. The Raiders ended the night shooting 55.8 percent and 45.5 percent from three.

The first half was pacy and both teams were flying up and down the court. Wright State began the game shooting 71 percent and only missed two shots in the first five and a half minutes. The Raiders led by as many as 12 with 12:01 remaining in the first half before the Norse began chipping away.

The star of the first half was Sharpe, who played 11 minutes in the half and came away with two steals that led to baskets for the Norse on the other end. He also scored four points, grabbed two rebounds and played tenacious defense.

Drew McDonald finished the half with 11 points and four rebounds, but he had trouble guarding the larger Love, who scored eight points and grabbed eight rebounds.

NKU tied the game for the first time with 4:43 after a McDonald steal that he turned into two made free throws. The Norse tied the game with just over a minute left in the half after a Sharpe steal that lead to a Jalen Tate dunk.

The Norse will regroup and prepare to face Cleveland State on Monday night. Tip off is scheduled for 7:30 p.m. and is part of a double header with the women’s basketball team. Both games will be available on ESPN3.