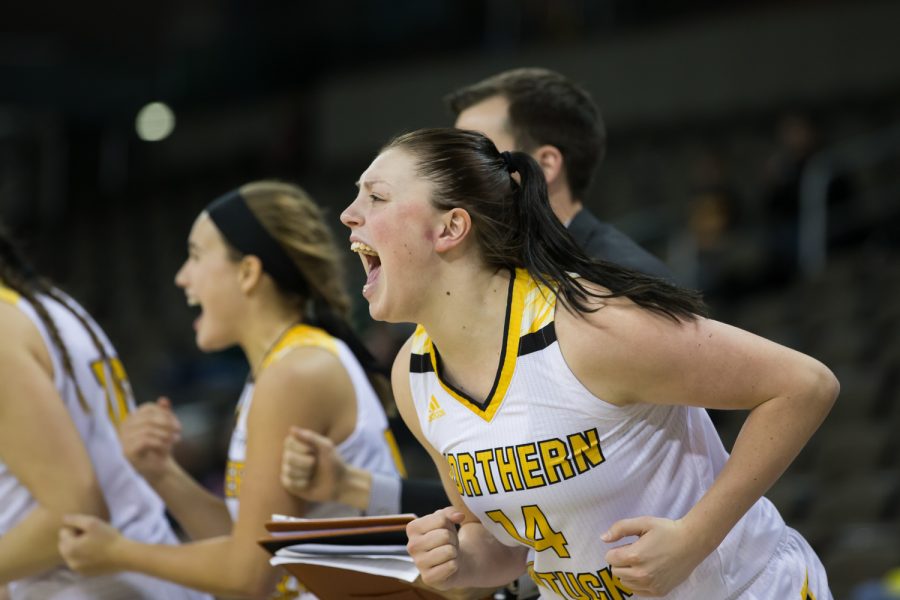 There haven’t been very many times in the past two seasons when the NKU women’s basketball locker room was filled with elation after a game.

But today, joy filled BB&T Arena as the final buzzer sounded and spilled into the locker room.

“It was crazy. An overload of joy,” guard Molly Glick said. “Just happiness for our team and our program. We’ve been working our butts off and to finally get a win and to beat Green Bay, that’s crazy.”

NKU pulled off a 62-54 upset victory over 19th ranked Green Bay Saturday afternoon in BB&T Arena. The Norse improve their record to 3-10 on the season and are 1-1 in conference play while the Phoenix suffer just their second loss of the season and are now 1-1 in Horizon League play.

Today’s victory was the first time the Norse have beat Green Bay, who have won the Horizon League 19 straight seasons.

“It’s no secret what they have done in our league,” NKU head coach Camryn Whitaker said. “They are an unbelievable basketball team. I’m just really proud of our team and how we fought.”

Taryn Taugher led the charge for the Norse off the bench, scoring 17 points on 3-5 shooting and went 2-3 from three. She also made nine of her ten free throws.

“I thought they stepped up huge tonight,” Whitaker said. “I think it’s why we won the game. These guys were here last year through some pretty tough times. For them to step up and show our players the way, I think that’s where we are trying to get to.”

Glick said she believed the Norse could win this game before the teams took the court.

The game plan was to keep the Phoenix out of the paint as much as possible, according to Glick, and force them into taking threes. The Norse zone defense bothered the Phoenix all afternoon.

“Keeping our feet moving was important  because they were pretty fast,” Taugher said. “If we didn’t keep our hands high they could get skip passes and we tried to eliminate those skip passes.”

Although Green Bay did score 28 points in the paint, they went just 4-26 from three and did not make a three in the first half.

Meanwhile, the Norse went 10-24 from three and ended the day shooting 41 percent from downtown and 37 percent from the field.

Jessica Lindstrom scored 20 points and grabbed 12 rebounds for the Phoenix, but she was just 2-10 from three. Allie LeClaire scored 13 points.

The Norse were on fire in the first half, shooting 47.6 percent from the field and 50 percent from three point range. NKU also made all but one of their free throws in the half.

Taugher and Glick both reached double digits in points in the half. Taugher was 2-3 from downtown and 5-6 from the free throw line. The Norse bench produced 22 points in the first half.

“We never talked about winning the ball game,” Whitaker said. “It was how can we improve these third and fourth quarters because we had been struggling so bad at those times in the game.”

Hey @ESPNAssignDesk how about Mikayla Terry’s 3 to help seal the win in @NKUNorseWBB ‘s upset over #19/20 Green Bay for #SCTop10 pic.twitter.com/IUiBgXfNxy

The Norse have now played the two top ranked teams in the Horizon League in Milwaukee and Green Bay. With the win over the Phoenix, Whitaker thinks it will give her young team confidence moving forward.

“For our team, I’m more happy for them just for their confidence,” Whitaker said. “It’s hard to keep confidence when you are 2-10. I’m just happy for our girls.”

The Norse will head to Detroit to face the Titans on Thursday at 7 p.m..