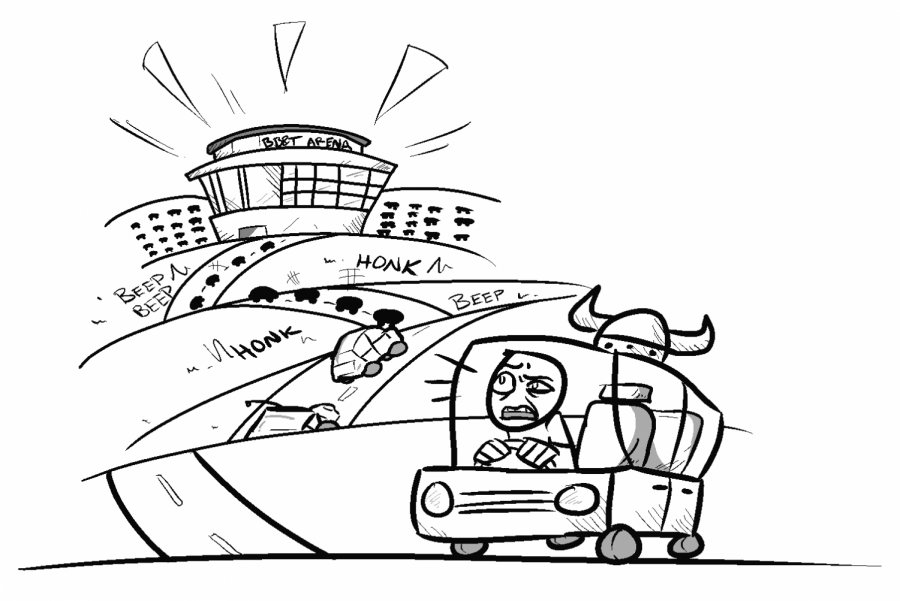 Cars line up bumper-to-bumper and stretch from Nunn Drive to Kenton Drive. Red and blue police lights reflect off hoods and rearview mirrors, the sound of  engines rumble as more and more cars line up.

The University of Cincinnati Men’s Basketball team is a new sight for NKU: with their home games now at BB&T Arena, the addition has not only brought a problem with traffic, but also with parking availability.

“Parking in general is not easy,” Andy Meeks, the Director of Business Operations & Auxiliary Services, said. “Not so much physically parking cars, but everyone has different expectations on parking…you can’t always meet [them].”

Northern Kentucky University announced  UC would be playing home games at BB&T Arena on Feb. 10 of this year. The home of the Bearcats, Fifth Third Arena, is undergoing an $87 million renovation that won’t be finished until Oct. 2018.

Developing a plan to handle the Bearcats’ fan base was a trial and error system, Meeks said. It is based on the number of people coming into the campus at one time.

“We have a system of when we get over 4,000 people coming into campus for an event at one time,” Meeks said, “depending on the situation, we can control the stop lights and traffic patterns, as well as use large amounts of police officers for assistance.”

Game time is also something that is taken into consideration when coming up with a traffic plan, according to Meeks. One of the biggest transitions is when students are leaving for the day at the same time as people coming into campus for games.

“We watch out for the six o’clock and 6:15 classes…we understand those are busy times on campus, so we try not to schedule any events during that time,” Meeks said. “We also need to take into account if it’s a weekday, holiday break, or weekend game.”

John Gaffin, NKU’s chief of police, said their biggest problem is the infrastructure of the campus. With three points of ingress and three points of egress, traffic starts to become a problem during the school day, Gaffin said. One of the solutions, however, is the recently added roundabout located on Three Mile Road.

“The roundabout definitely makes traffic go much smoother,” Gaffin said. “The Achilles heel of it, [the roundabout] of course, is it creates traffic from different directions.”

Megan Bosma, a junior commuter student at NKU said one of the biggest problems she has faced was the Bearcats’ first regular season home game back on November 10th.

“The school emailed us that morning and said there was going to be traffic coming off the highway,” Bosma said. “The traffic was backed all the way up to the Wilder exit and I was late for my class.”

According to Bosma, traffic during the day isn’t so much of a problem, but it is inconvenient to deal with. With the new psychology building on campus constructed, it took away a parking lot.

Having police officers on campus helping to direct traffic is something Bosma feels that is being handled well.

“It’s nice that they have them [officers] directing the traffic…without them, it would be complete chaos,” Bosma said.

The biggest concern for Gaffin is staffing in such a short amount of days. Gaffin said having to get officers from around the area for numerous times in a week is a huge help for his team.

“It’s not just our officers, we work with officers from all over the county,” Gaffin said. “Not only are we dealing with the NKU men’s and women’s game but with UC games and the other events around the area…it’s crucial that we have enough officers to help us out.”

Dealing with the infrastructure on campus is the solution to the traffic and parking situation, Gaffin said. Getting more than one way in and out of campus with more than one lane is crucial to getting people in and out as quickly as possible.

The parking and traffic situations aren’t just the concern of parking services and officers, but of students as well. Jake Roberts, a junior at NKU, says it can be challenging to get parking on campus when games are being played.

“It’s hard because not everyone can have the parking spot they want,” Roberts said. “It’s either get there early or you might have to walk a bit further than usual to get to where you are going.”

Roberts is a manager for the NKU Women’s Basketball team and said it’s hard on game day because they close Lot O on campus.

“When they close it [Lot O], it makes it hard because it’s an easy path to the area and if they have a night game it is closed all day,” Roberts said. “This makes parking in the Kenton Garage hard because everyone is trying to park there.”