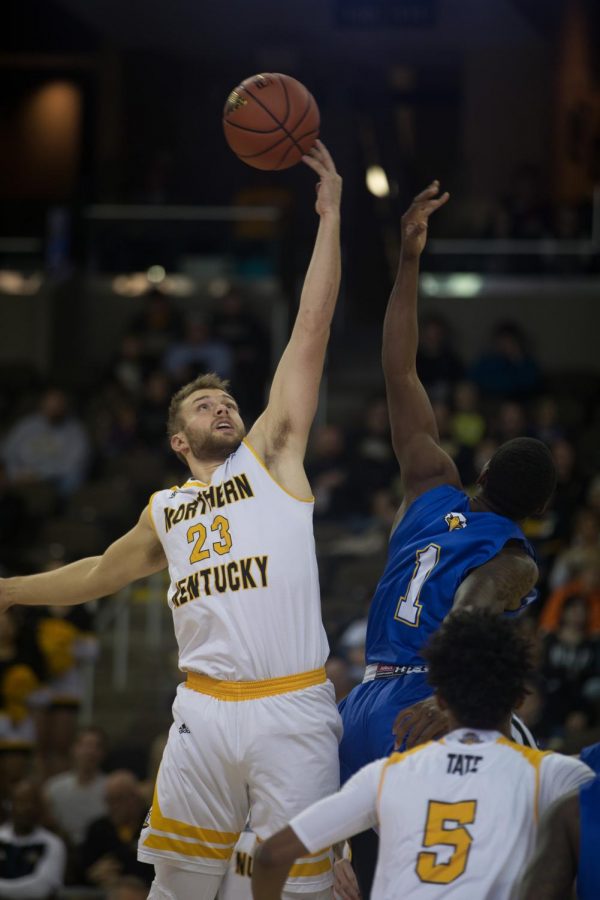 Gallery|13 Photos
Colin Johnson
Carson Williams (23) wins the tip off in the game against Morehead.

The NKU men’s basketball team defeated Morehead State 86-49 on Saturday night. The Norse improve to 6-2 on the season while Morehead State falls to 2-6.  The Norse have now won two straight games after falling short to Vermont and Memphis on their last road trip.

“In the first seven games we’ve had leads that were pretty substantial and we haven’t increased them. In fact, we’ve fallen back and teams have cut it to single digits or won games. I thought today that didn’t happen. I couldn’t be more proud with our young men’s defensive intensity from the beginning to the end.”

Drew McDonald opened up the second half with two made threes and a layup, which gave him over 1,000 points in his NKU career.

“It’s a great accomplishment,” McDonald said. “It’s a goal a lot of people have coming into any career. All my friends and family were here, great crowd, student body was great. Without these guys to right and left (Carson Williams and Jeff Garrett), I wouldn’t be nearly the player I am today.”

McDonald’s mother, Christie, is 12th on the all-time scoring list for NKU’s women’s basketball team with 1,339 points from 1987-88 to 1990-91. McDonald said he and his mother have a friendly competition about their respective careers.

“It’s a friendly little banter,” McDonald said. “It’s motivation and something to push for because whoever ends up on top has bragging rights for the rest of their life.”

McDonald ended the night with 22 points, which ties his season high, and grabbed five rebounds.

That would be as close as Morehead State would get though, as the Norse pushed the lead back out to 10, with the help of a Lavone Holland three that he made falling out of bounds in the left corner after losing control of the ball.

“I was thinking he was going to turn the ball over for the fourth time in the half,” Brannen said.

“We were just making shots today,” McDonald said. “We’ve been getting good shots all year and our two point field goal percentage has been outstanding this year. We trust our offense and coach Brannen puts us in great positions to be successful.”

After not scoring a basket and missing all three of his free throws in the first half, Carson Williams came alive, scoring 13 points in the final period.

“The first half I was just missing shots I should have made,” Williams said. “I got a little frustrated but I decided to lock in on defense and the rest just fell into place in the second half.”

The Norse will take the floor again on Dec. 6 when they head to East Tennessee State for the second game of the season between the two teams. NKU defeated ETSU 81-63 in the season opener. The Norse will then return home to face Eastern Kentucky on Dec. 10 at BB&T Arena at 7 p.m.