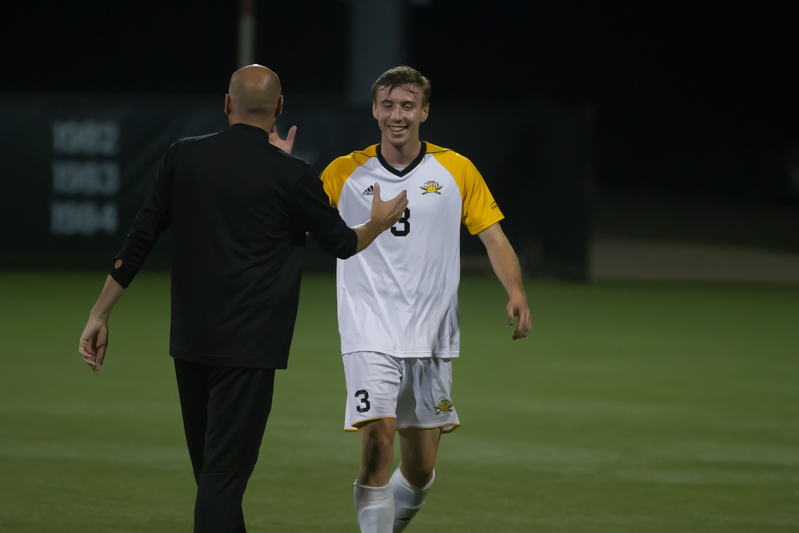 Currently sitting at 6-4-4, the NKU Men’s Soccer team is on pace for a record year. With a new coach at the helm and nearly half the team made up of international students, the Norse have accumulated five more wins than last season and are only two wins shy of the 2015 season.

With half the team from outside of the U.S., creating team chemistry can be challenging and–according to head coach Stu Riddle–winning games is helps with that process.

“When you have a team identity and you ask the players to go and play in a certain way…I think that creates good unity and good spirit because there is a belief there that they all share,” Riddle said.

For many on the team, Riddle said it’s a whole new experience. Coming to a country is one thing, but living in a new place is a different experience altogether. He added that the first few weeks are an adjustment period.

Eleven of NKU’s 23 players hail from 10 different countries ranging from South Africa to Italy to Sweden to New Zealand.

“It’s a very different country here; it’s a different lifestyle…the style of soccer is different here, too,” said Bastian Beckers, a junior from Nettetal, Germany. “The first year was difficult, but once you get used to it, it’s ok.”

Stu Riddle, the NKU head coach, always wants to end practice with soccer-related team building activities,  such as scrimmages and fun games. The goal of these are to make players more comfortable and to end on a positive note, he said.

“It’s very difficult for the internationals to come here for their first year because they are so far from home,” Riddle said. “We understand it is a struggle and we have to be here for them.”

Though it can be a challenge feel comfortable living in a new area, provide for yourself and meet new people, it also comes with a herd of benefits. For Rizwaan Dharsey, a junior from Johannesburg, South Africa, he said he’s able to gain understanding.

“You learn from them, it’s a great learning environment. You learn not only about your teammate’s background, but learn about America, as well,” Dharsey said.

Since the players players live together on campus, they are able to grow and learn alongside each other.

“You get the respect of other people’s traditions and holidays,” said Calvin Murphy, a junior from Cavan, Ireland. “You get to see what they do and you can experience it with them.”

With the team always doing activities outside of practice such as eating, living and even going to an Escape Room, you grow as a collective unit, Beckers said.

“We do everything together, they become your family.”

Though soccer is played worldwide, it varies depending on the country itself. Dharsey noted that the gameplay is a lot more physical in the United States, with a faster, more demanding mindset.

For international players, Riddle said one of the hardest adjustments  is the amount of games and how frequently they are played.

“Most of these guys are used to playing one game a week,” Riddle said. “Now it is multiple in a week and you have to throw in travel and heat; it’s a different experience.”

Not only is the physicality of the game different, but the play as well.

“Back home it was more technical. We would possess the ball for two or three minutes at a time…here it is like a pick and rush,”  Beckers said.