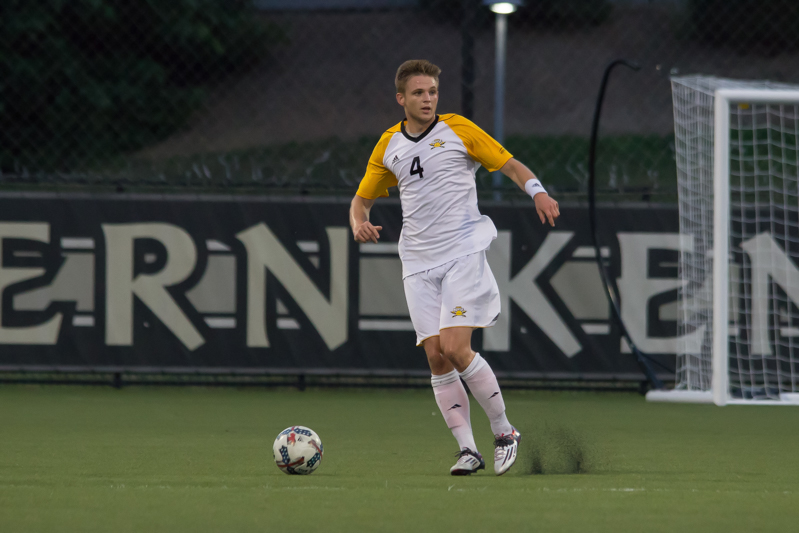 Wlademir Babaew, an NKU men’s soccer team member, has brought his athletic prowess overseas; born in Russia, his family later moved to Germany before he eventually came to the United States.

A sophomore defender, Babaew began the game at the age of four as a child in Russia and realized his passion for professional leagues at the age of nine. He credits his father in large part to the force behind his passion and motivation.

“My dad always supported me,” Babaew said. “When you are a kid, sometimes you don’t want to practice…and he said ‘No, you have to practice, you are going to thank me later,’ and he was right.”

Eventually, his family made the move from Russia to Germany in order to further both his education and his soccer skills.

At the age of 16, he said the independence he found in Germany–where he lived on his own–became a major component to his soccer ability. The freedom was two-fold: with it came both maturity and a sort of special confidence.

“It definitely changed my character,” Babaew said. “Many people described that I play more mature, that I am not afraid to take damage.”

Next Stop: The United States

In the United States, one team per sport (basketball, soccer, tennis, etc.) represents the whole school. In German schools, there are levels an athlete can move up in a club and players are grouped by age. The last level, the golden level, was a spot on the men’s professional team.

With his skill, Babaew quickly moved onto the highest youth league, but he had to carefully consider his next move.

“I decided, okay, to jump to the professional soccer would be pretty difficult. So I had to find an option where I could study and play soccer at the high level at the same time,” Babaew said. “So the United States was one of the only options that I had.”

Out of the slew of coaches reaching out to him, Babaew knew he wanted to be a part of the NKU program. He credits this decision to the NKU coaches and fantastic recruiting program, as well as his love for the university’s gradual progression to success that led them to the Horizon League.

“It’s definitely a school that focuses on being successful. It was a big thing for me,” Babaew said. “Because most universities play every year the same and you do not see big improvement. Here you saw improvement.”

The transition from playing soccer in Germany to in the United States came with adjustment. A big difference lyed in season length; in the US the season is comparatively short. In Germany, it was played year-round from August to June.

“[In Germany] you grow up with soccer, in the news you see they are showing soccer, everyone is watching soccer,” Babaew said. “In the lower 5th league, I was still playing in front of 2,000 people.”

Despite this, Babaew said he does like the importance that the US puts on college sports.

“In Germany, no one cares about college sports,” Babaew said. “So here you see the university care about athletics, people walk around in jerseys, and come to watch you play. This is what I really like about the United States.”

‘Reach for the Stars’

As a defender, Babaew has helped the Norse record six shutout victories in route to the 6-2-3 start to the season.

Even in his youth, he knew that speed and flashiness on the offensive side of the pitch were not his strongest suits. Rather, he focused on an even more important skill: defending the goal from the opponent.

“With time you see what you are better at,” Babaew said. “I saw I was better at defending one on one, winning headers, diving for every goal, and saving the ball.”

The key to his style of playing is marked by his mentality.

“It’s character-based, so really strong character and pushing through everything,” Babaew said. “And being defensively really strong, especially one on one.”

However, as every athlete knows, there is always room to improve.

After playing with NKU his freshman year, he continued to play soccer into the summer. This summer Babaew played with the Dayton Dutch Lions. The new coaching staff pointed out areas where he could improve, jumping, speed and technical skills.

He focused on these areas through the end of summer. Not only did he notice improvement, but his coaches did as well.

Stu Riddle, NKU head coach, has worked closely with Babaew and sees him as a leader.

“He is one of those guys that leads by example on the field,” Riddle said. “He has this will to be successful. When the other players see that sort of desire coming from another player, I think it spreads through the team.”

Now, Babaew is fresh off of the summer with the Dutch Lions, and said that NKU’s tough 2016 season (overall record was 1-13-4) has propelled him into a new kind of endurance this 2017 season.

“You have to find that motivation to push through and feel there is a new beginning,” Babew said. “You see this [optimism] just might help and just might change the game.”

Babaew has been a strong asset to the team in his defense position, improving from last season. Currently, NKU’s the overall record is 6-2-3. Riddle has seen Babaew’s improvements and notices his motivation to be better every game.

“He is always going to be 100% committed to the cause and show great determination,” Riddle said. “Which has been a huge asset to the team this season.”

Babaew loves the positive environment with the team in the locker room and the encouragement from his coaches. Babaew sees the excitement the team’s success has brought NKU students.

“I really enjoy it,”  Babaew said. “We can reach for the stars because everyone believes now that we can win everything, so I am super happy.”