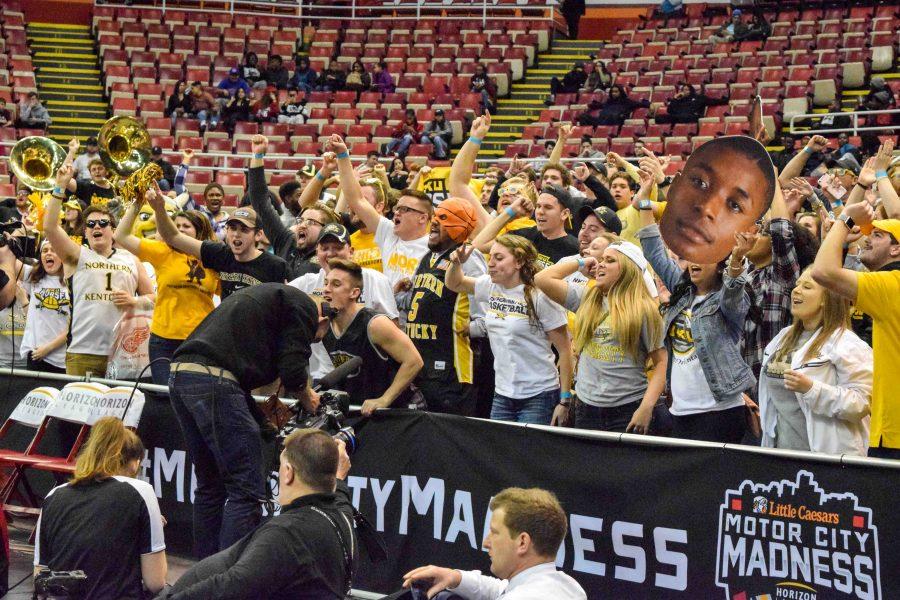 Norse Force president Turner Davidson hopes to see more student crowds like the one at the Horizon League tournament this season.

When it comes to filling up the student section for NKU sports, Norse Force brings pride in their campus–the organization’s role is centered in school spirit and support of all things Norse.

At its core is Norse Force president Turner Davidson, an NKU senior who wants to draw in more students to the games as well implement new strategies to make the club’s hopes a reality.

“It is a student organization that is a little different from most organizations on campus,” Davidson said.  “Anyone can be a part of this organization; really, it’s just the student section at all of our sporting events.”

The organization works with the athletic department to give members perks to keep them coming to matches and to take pride in being a member of the student section.

Last year, the Norse basketball team had a record of 24-11 with a 13-6 Horizon League mark, and proceeded to win the Horizon League tournament as well as reaching the NCAA Tournament.

‘’I think a lot of it came from the fact that toward the end they saw that we were going to be winning a lot,’ Davidson said.  “So they were more interested in being a part of it and linking themselves with NKU athletics in a way that they absolutely could as a student.’’

She hopes that the growth of students showing up at basketball games last year will continue into this year.

‘’For us, seeing the difference between a crowd that has 300 students and a crowd that has 1300 students at a basketball game is completely different,” Davidson said. “The team wants the students there, the coaches want the students there, coach (John) Brannen is more concerned about students than he is season ticket holders, so it’s really important that students are their to support their fellow students because they want to see that as well. They play so much better with an atmosphere that is dictated by students.’’

The basketball team isn’t the only sport Norse Force supports, however, but sports across the spectrum at NKU as well. Ava Lawson, a sports business sophomore and softball player, would back up that notion.

‘’Obviously a lot of times everybody gets out to the basketball games just because that’s obvious but I think Norse Force helps a lot with getting people to soccer games, baseball games, softball games and stuff like that.’’ Lawson said.

Some of the things that Davidson saw work last year were various giveaways, including foam swords for the homecoming game as well as a tailgate party toward the end of the Valparaiso game.

This school year, Davidson says Norse Force will continue to do promotions and giveaways for games, but hopes students come regardless of if they’re offered or not.

‘’We’re also relying heavily on marketing it instead of having so many promotions this year and we’re hoping for an organic crowd and not just a promotion based crowd,’’ Davidson said.