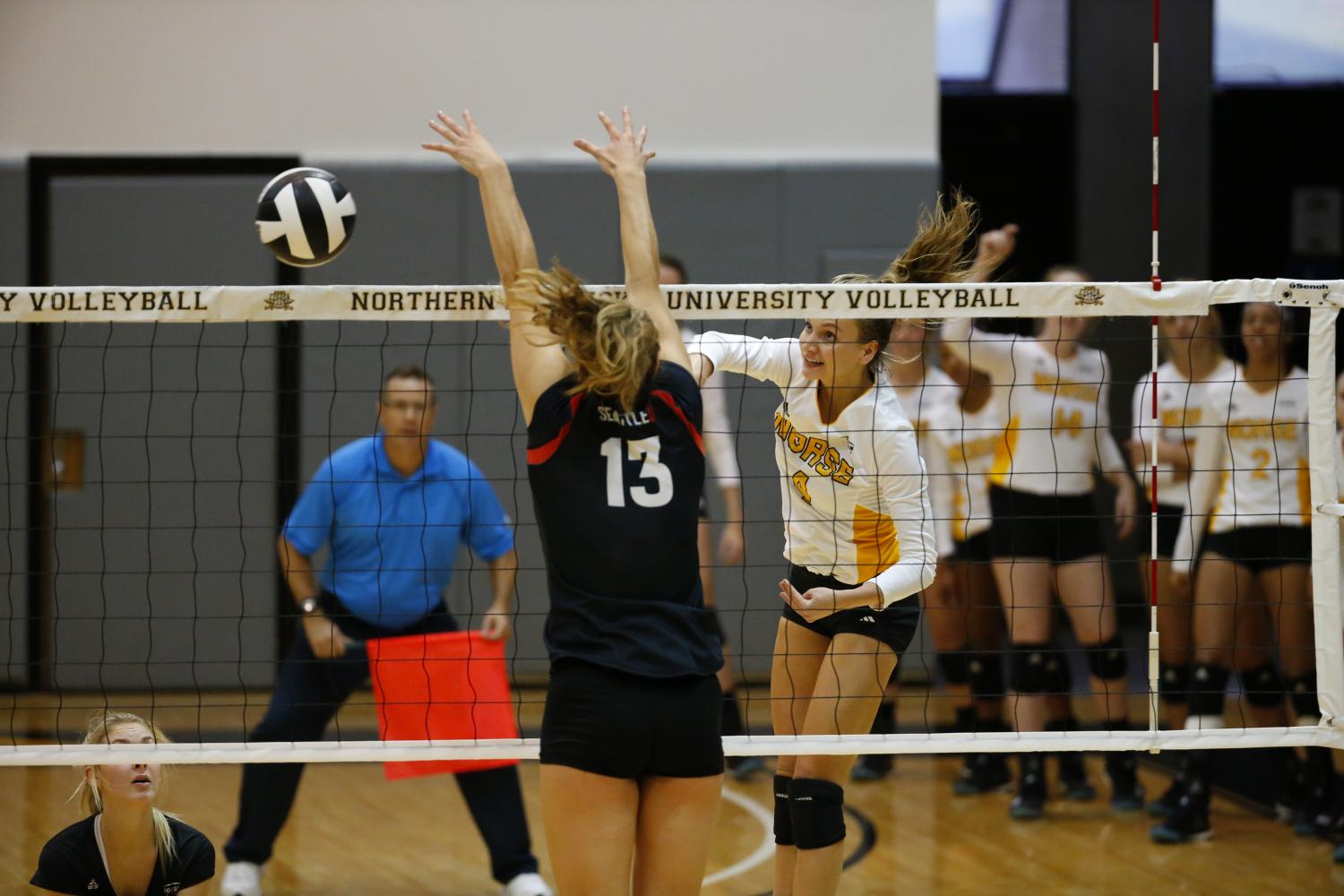 Haley Libs records a kill during the NKU Invitational in Regents Hall.

“I’m incredibly proud of this team,” head coach Liz Hart said. “I’ve been on them the past two weeks that they don’t work hard enough and that they’re not pushing themselves to the max. But I tell you what, they did tonight.”

Wright State (6-9, 0-2 Horizon) got off to a hot start against NKU (5-5, 1-0 Horizon), leading 4-1 early in set one. The Norse would battle back though, with Haley Libs (6 kills) and Laura Crawford (4 kills) leading the charge. The pair would help the Norse knot the set a combined eight times, until the Raiders moved ahead 23-22. Wright State would seal the deal with a pair of kills from outside hitter Katie Klusman.

NKU jumped out to an early 5-1 lead in the second set, but after a number of errors by the Norse and eight kills from the Raiders Katie Klusman, NKU would drop the set 25-18.

“We needed to clean up our defense and serve better,” said Hart. “We weren’t aggressive enough in the first two.”

With their backs against the wall, Hart made a key change at the libero position by swapping freshman Ashton Terrill for senior McKenzie Eskridge to start the third set. Down 7-6, the Norse would go on a 5-1 run to take the lead at 11-8 and never look back.  Libs finished the set with seven kills and Crawford with four to win the set, 25-21.

The Norse stole momentum with their third set win and sprinted ahead early in the fourth. Down 8-3, the Raiders would go on a 5-1 run and cut the lead down 9-8 in favor of the Norse. But the Norse, led by Libs (6 kills) and Drew Hendricks (4 kills), would roll to a 25-19 victory to force the fifth and deciding set.

Libs led the Norse with her 23rd career double-double (26 kills and 17 digs) and a hitting percentage of .203.

Crawford also had a double-double (6th of the season) with 14 kills and 16 digs. While Shelby Olsen was one dig shy of joining the duo as she finished with a career best 57 assists and nine digs respectively.

Crawford and Georgia Childers pounded a combined 18 kills, but the Northern Kentucky Norse dropped four sets to the IUPUI Jaguars in a Horizon League match at IUPUI, Sunday afternoon.

Shelby Olsen recorded her third straight double-double with 32 assists and 13 digs for the Norse, while Libs and Hendricks posted seven kills apiece

After dropping the first two tightly contested sets, the Norse fell behind early in the third, but battled their way back as they hit .250 to push a fourth set. 13 Norse errors combined with the Jaguars hitting percentage of .462, proved to be too much for the Norse comeback, as they dropped the final set, 25-11.

Gabby Fisher led the Jaguars with 16 kills and seven digs. Kori Waelbroeck had 12 kills, while Maggie Gibson finished with 48 assists.

The Norse return to action when it host Youngstown State on Friday, Sept. 29th at 6 p.m. from Regents Hall. The game will be broadcast on ESPN3.