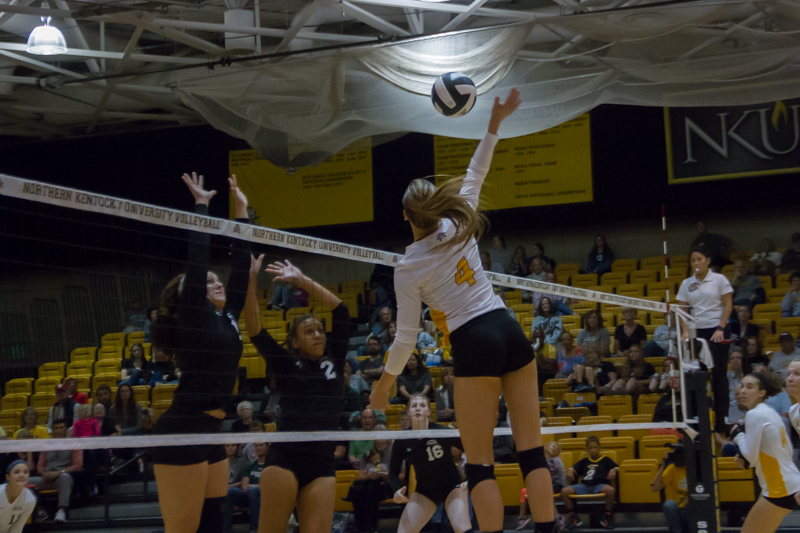 Haley Libs jumps to spike a ball past the Cleveland State blockers. CSU would go on to win the match 3-2.

Senior libero McKenzie Eskridge doesn’t look at her stats. In fact, she is superstitious about looking at the page on the NKU Athletics site and hasn’t read an article about herself since freshman year.

“It started in high school and I would read one article about myself and think to myself ‘Oh that’s a great write up’ and then go and have a terrible game,” Eskridge said. “Something similar happened my freshman year of college.”

She does care about one stat this year: Rings.

Eskridge and the NKU volleyball team are shooting to win the Horizon League championship this season after they went 18-11 and finished third in the standings in 2016. The Norse fell to Green Bay in the semifinals of the Horizon League tournament.

“The Horizon League finished 11th out of 33 conferences in terms of toughness. I don’t think a lot of people know how strong the Horizon League is,” head coach Liz Hart said. “So for us to finish third and go to the semifinals, obviously you want to win it, but I’m really proud of our team and the success they’ve had and how we have represented the university.”

While four seniors graduated from last year’s team, including kills leader Keely Creamer and assist leader Taylor Spaulding, Hart believes her program continues to grow stronger with the level of recruits coming into the program.

“I always try to look at each team’s strengths,” Hart said. “Yes, we lost a lot of contributors last year, but if you come in our gym now, we are hitting the ball harder than any other NKU volleyball team has. I think defensively we are just as strong.”

Leading the way on offense will be junior Haley Libs, who made the All-Horizon League Team for the second consecutive year.

“It’s a really awesome honor to receive. It definitely makes me want to work harder to stay in those mentions,” Libs said.

Libs recorded 340 kills, only four behind the team leader Creamer, while also serving a team high 28 aces. She also finished second on the team with 285 digs.

While Libs has earned respect among teams in the Horizon League, Hart says it will be important to find a new way to get her outside hitter open.

“Haley is really well respected in the league and we need to find ways to help Haley get open and score because we know people know who she is,” Hart said. “We’ve added some different sets in to help make her available and make some swings a little easier for her.”

Eskridge will lead the Norse defense after recording 214 digs in 2016, good for 3rd on the team behind Libs.

Eskridge was one of the best servers on the team last season, recording 24 aces and making just 13 errors.

“She’s one of the best servers in the league,” Hart said. “She’s saved us quite a few times last year.”

Hart is looking to sophomore setter Shelby Olsen to fill the role once held by Spaulding. While Olsen has had experience running an offense in the past, Hart is looking for more consistency from her this season.

Laura Crawford, who made the Horizon League All-Freshman team last year, will move to outside hitter this season. Hart also expects right side hitter Kelly Turner, who was injured last season, to contribute as well.

The Norse will begin their season in Pittsburgh this Friday for the Duquesne Invitational where they will face Robert Morris, Duquesne and Canisius.

The Norse were originally supposed to start their season on August 25 at the Barcelona Classic in Houston, Texas but the tournament was canceled due to Hurricane Harvey’s landfall.

Last season, the Norse went 6-5 in the preseason tournaments and then fell to 6-8 after dropping their first three Horizon League games. Libs believes one of the keys to success for the Norse this season is starting the season with wins.

“Start strong and end stronger,” Libs said. “In the past, in preseason tournaments we struggled in the beginning and then in the middle (of the season) we really find it.”

Hart’s goal is to finish in the top three of the regular season standings and defeat Horizon League powers Green Bay and Cleveland State at least once. She also believes that this team is capable of more, but hasn’t learned yet what it will take to get there.

“I want to win the conference tournament because I think we have the talent to do that,” Hart said. “I think we rely a lot on our athleticism and don’t know how to work as hard as we need to. That’s not saying they don’t want to, it’s just how hard can you push them to make them realize they can go harder.”