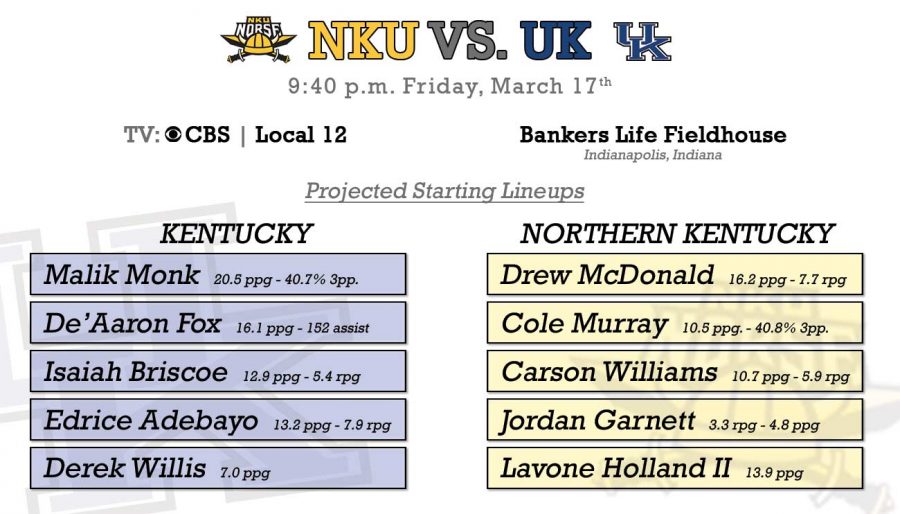 WATCH: Get ready for the big game: NKU vs. UK

A look at the Wildcats

Kentucky is currently ranked fifth in the nation by the Associated Press with a 26-5 record in the regular season. The Wildcats won the SEC regular season and postseason championship, beating Arkansas on Sunday to claim their 30th SEC championship.

The Wildcats are ranked fifth in the nation in scoring offense, scoring 85.9 points per game. The Wildcats want to get out in transition as much as possible with speedy guards De’aron Fox and Malik Monk and run their opponents out of gas.

Malik Monk is a prolific scorer, averaging 20 points per game and shooting 40.7 percent from three point range, which is ranked 40th in the country. Fox has blazing speed that gets him to the bucket quickly.

The Norse have had a strong starting four throughout the season, with Adebayo and Briscoe playing critical minutes. The Wildcats, however, have been trying to find a consistent fifth starter. Seniors Derek Willis and Dominique Hawkins have played well near the end of the season, while Wenyen Gabriel has faded down the stretch and Mychal Mulder has never quite reached his potential as a Wildcat.

The Wildcats cruised through the majority of their non-conference schedule beating North Carolina and clobbering Michigan State and Horizon League members Valparaiso and Cleveland State. The Wildcats did lose to Louisville and UCLA, both high-seeded tournament teams.

Kentucky hit a rough patch in the middle of their conference schedule, losing to Tennessee and Florida in SEC play

and losing to Kansas in a non-conference matchup. The Wildcats then proceeded to win their next 11 games.

The Wildcats have been inconsistent scoring this season. These inconsistencies usually occur at the same time Monk is not playing well.

How the Norse can win

defensive end. The Norse have proven through the course of the season they can will themselves into baskets. Drew McDonald can’t disappear like he did against Wright State in the Horizon League tournament.

Throughout the season, the Norse have improved their bench play significantly. Brennan Gillis, Dantez Walton and Mason Faulkner have all increased their playing time while Jeff Garrett made several huge baskets during the Horizon League tournament. They will need to step up again in the game. It’s going to take an entire team effort to beat Kentucky.

NKU should try to get the ball inside as well. Kentucky is not a great shot blocking team and if the Norse can score inside and get Adebayo in foul trouble, it will increase their chances of completing an upset. They can’t settle for outside shots, cause those misses will lead to transition points for Kentucky.

That said, Cole Murray needs to get going and make some threes if the Norse want to keep up with the Wildcats in this game.

Defense is going to be a huge deal in this game, especially since both Kentucky and NKU want to get out in transition and play fast. Getting key stops will be critical for the Norse. If the Norse want any chance at winning, they must slow down Monk. If you can find a way to take him out of his game, you have a much better shot at beating Kentucky.

Any defensive breakdowns by the Norse can turn a small deficit into a large deficit against this high powered Kentucky offense.

Best Case scenario for the Norse

The Wildcats come out sluggish in their first round game, overlooking the Norse who come out with fire in their eyes. Drew McDonald and last year’s Mr. Kentucky Basketball Carson Williams get going early scoring down low while also drawing fouls on Adebayo to send him to the bench in the first half. Murray shoots lights out from the outside, while Monk struggles to get going.

The Norse carry a three point lead into halftime. The game remains close for the majority of the second half, but McDonald and Horizon League Tournament MVP Lavone Holland carry the team to a five point victory to upset the Wildcats.

The Norse then play Dayton in the round of 32. Again another close game, but like they have so many times this year, the Norse find a way to beat the Flyers in the final minutes. The magic ends there though, when the Norse lose to

The Norse will keep the game close in the first half thanks to a great performances from McDonald and Holland. The Wildcats come out flat in the first half, but take a five point lead into the locker room.

The Norse, however, won’t be able to keep it close in the second half. The talent of Kentucky will catch up to the Norse. Adebayo, after first half foul trouble, will dominate the paint in the second half while Monk and Fox continue to dominate.

The Wildcats will win by double digits and the Norse will head home to begin preparing to defend their Horizon League Championship.