Never too far away to help 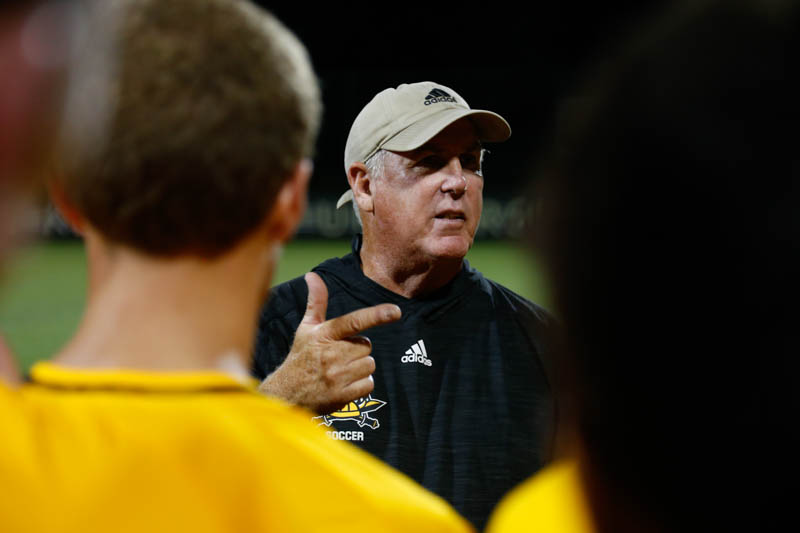 Basalyga, according to his daughter, is goofy and lovable away from the soccer field

On the field Basalyga’s passion and competitiveness were ever present, but if you were lucky enough to get to know him off the field you would meet a slightly different character.

“He’s goofy. He is weird as sin. He’s extremely playful. He says I love you all the time, he’s a hugger,” Lindsay said. “My teammates from college were like ‘OMG I miss getting hugs from your dad’ and people that don’t know him only see who he is on the sideline. He’s not a cold standoffish person but you gotta earn that relationship.

“He would do anything for any player or anyone who earned that right to know my dad and have that relationship.”

When Lindsay was in Maryland, the closet in her apartment totally collapsed. There were clothes and school items all over the floor.

“My dad got in the car in between training sessions and drove eight hours all the way to Maryland to rig my closet back up with athletic tape,” Lindsay said. “He always use to fix stuff with athletic tape and rope. He was that much of a handyman that the athletic tape would fix anything.”

Athletic tape was used to fix everything, including Lindsay and her siblings’ toys when they were younger. It didn’t fail this time either, holding the closet up for the two years Lindsay lived in that apartment.

Beattie describes Basalyga as a father away from home. He was the first person Beattie called after he was selected by Toronto FC in MLS Draft. He called Basalyga for advice on every professional decision.

“He’s got the best advice you could ever get,” Beattie said. “I called him about contracts, about money, the teams I should go to. He talked me through everything. We still have the same relationship we had when I walked into college in 2007.”

When Beattie tore his ACL in his first game for the Puerto Rico Islanders, Basalyga was ready to fly down and to see his former player.

“That’s the kind of guy he was,” Beattie said. “He was prepared to drop everything to come see me even though I wasn’t part of the program.”

Other former players have been affected by Basalyga so much, they formed an indoor soccer team in his honor.

“There are a group of guys who played at Northern back when my dad got there and they have a group of NKU alumni who are playing in an indoor league together and named the team ‘John Basalyga’, but completely botched the spelling,” Lindsay said. “Those are the types of relationships he had and not everyone earned that. Players need to earn the right to know you beyond the surface of just being a coach.”

Retired, but not finished

Basalyga doesn’t have any hobbies. He believes he will probably be bored in retirement.

“My hobby is kids,” Basalyga said.

Basalyga now hopes to start a baseball or soccer academy with Lindsay in the future, so he won’t be completely out of his game.

“We have a guy who just came out of the woodwork last month who wrote a letter to my dad and is now helping my dad set up his own business,” Lindsay said.

Lindsay and her father are hoping to start this summer with a couple area high school teams and grow from there.

Basalyga knows it’s time to move on. He wants to spend more time with his wife and kids. He could have retired before the transition to Division I, but told Meier he thought he was the right guy for the job.

“I could have walked away before the transition on a high,” Basalyga said. “I can take a hit on my record. I wanted to move the program in a direction that is going to allow the next guy to have some sort of momentum.”