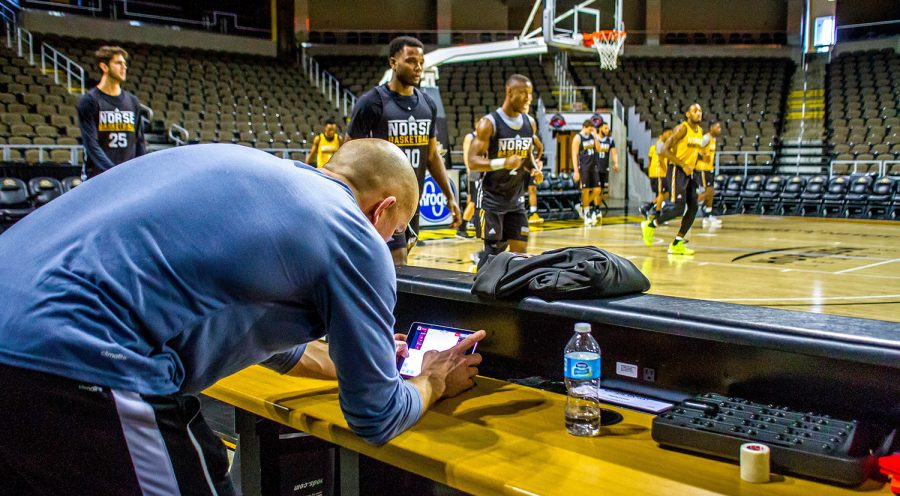 The athletic department may have found a way to minimize both the impact and prevalence of injuries in NKU student athletes.

NKU athletics has teamed up with Gabe Sanders, an exercise science and statistics professor at Northern Kentucky University. Their goal is to develop statistics to analyze athlete workload; through this they will attempt to pinpoint when injuries happen and how to recover from them.

“We can create ratios that will tell us if the acute (immediate) workload is greater than the chronic (average) workload. If the acute is greater than the chronic, then you open yourself up to more injury,” Sanders said. “By looking at those types of numbers we can make recommendations on if student athletes need to pull back a little bit on workload.”

The two departments have introduced wearable technology to track what athletes go through during practice and games.

Technologies such as Catapult Optimeye S5 and Polar Pro heart rate monitor measure acceleration, deceleration, speed, number of jumps and total distance traveled during practice. These items will be used to figure out how much work is too much for NKU student athletes.

Both devices can fit in the palm of the hand and are worn near the wearer’s heart. The Catapult is held in a harness, while the Polar Pro is connected to strap that is worn around the chest.

The Optimeye S5 uses GPS technology to track positioning of athletes and the acceleration and deceleration during a practice. It uses over 1,000 data points per second in real time sports.

According to Catapults website, over 900 professional and collegiate teams from 58 countries are clients of the

company. Nineteen professional and collegiate organizations like the New York Knicks, AC Milan, and the University of Kentucky have performed case studies with the company.

Sanders says almost all professional organizations use Catapult or similar devices like the Polar Pro to analyze player performance.

Learn more about the technology on Catapult’s website: Whiteboard Animations

All NKU athletes that participate in contact sports wear this device in every practice, while volleyball players also use it during games. The device plugs into a computer and processes the information, where Sanders will create graphs with the data collected during physical activities.

Sanders says the overall goal is to predict statistically performance decrements based on the variables measured.

“Which one of these variable will predict a decrease in power output, an in increase injuries?” Sanders said. “We’re not only trying to look at it as we go but try to predict stuff based on previous workloads.”

All of this information will be relayed to the athletic training staff, as well as coaches, who will use it to adjust practice activities, training programs and recovery programs.

“By looking at those types of numbers we can make recommendations on if student athletes need to pull back a little bit on workload,” Sanders said.

Since the program started this year, Sanders doesn’t have enough information to make these recommendations yet, but he has found data so far that he finds intriguing.

For instance, during practice the basketball team runs an average of three or four miles a day, while volleyball players jump over 200 times a game.

“As an athlete you just go do it. Sitting on this side of it it’s interesting to see just how much they are actually doing,” Sanders said. “You don’t think of basketball as being a distance sport … doing 200 jumps at a higher intensity, you’d be pretty exhausted.”

Brain Boos, strength and conditioning coach at NKU, practices with student athletes to promote strength building and minimize the chances of sports-related injuries.

“One of the best ways to prevent injuries is to be ready for what you are about to do,” Boos said. “A lot of it is built

into the workout. Being strong is all good and dandy, but technique breaks down when you are tired.”

Boos does what he calls a movement analysis, where he and his staff try to find out what movements athletes need to perform to get stronger and what kinds of movements cause the most injuries.

“Are we going to prevent all of them? Probably not. But we try to do some different things with them,” Boos said. “Our athletes probably don’t realize that they are doing it, but that’s why we preach technique to them.”

Boos can utilize Catapult and Polar data to discuss and help coaches recognize if they are going overboard during practice, something Sanders also wants to stress.

“Sometimes more is not more and that’s what we are trying to get the coaches to understand,” Sanders said. “It’s okay to go hard sometimes but you have to know when to scale back and that’s what this technology allows for. We can tell the coaches, ‘Hey this is what you are doing and it’s okay right now but if you do it three or four days in a row without backing off you might get some soft tissue injuries.’”

Boos also hopes to use this information to improve his own work. Knowing when and how athletes get injured gives Boos insight to what exercises need to be done as well as what activities need adjustment.

“We’ll look at the data and some teams have video people come in and film their athletes and then try to analyze their movement patterns and if they are doing anything incorrectly,” Boos said. “Then we try and come in here (weight room) and try and fix it through strength training and better drills.”

This can also be used to help assist in the recovery of injuries that have already happened. During their recovery, student athletes will wear the Catapult device so Sanders and Boos can see how their movement speed is progressing.

Boos also notes that exercise science is a developing and challenging field.

“We’re trying to pinpoint one thing that has 20 or 30 factors and we’re trying to isolate each one,” Boos said. “We don’t hit home runs every time. We like to think we don’t strike out every single time. It is difficult with the reoccurring injuries where we try and strength train and then correct and balance it and find where we went wrong.

Unfortunately some bad things have to happen for the program to move forward.”

Boos hopes the partnership with Sanders and the opening of the Health Innovation Center can bring about some new testing and new information.

“We are hoping to get some baseline testing on more of our athletes where we can say, ‘This is your baseline, how can we improve it?’” Boos said. “Not only enhance performance, but (find out) is there a differential between hamstring and quad strength that could cause problems down the line.”

Sanders is hoping to grow his resources in the future to further help student athletes stay on the field.

“It would be great if we could have a position here that would just be overlooking all of the athletes,” Sanders said. “From a safety and performance perspective, the goal is to stay safe and maximize performance. The goal would be to monitor all the athletes and actually be able to look at this stuff in a matter of fact way to make better recommendations and make better athletes.”

The big conversation surrounding injuries in collegiate and professional sports is concussions. While NKU does not have a football program, they are required to have a concussion protocol, according to Molly Woods, associate athletic director in sports medicine & risk management and head athletic trainer.

“We have an approved protocol we turned in two years ago and was approved by the NCAA again this year,” Woods said.

All freshmen and transfer student athletes are required to participate in an impact test to establish a baseline for the trainers to monitor. If an athlete suffers a concussion, the athlete is removed from the game they are currently playing in. They then have to pass the impact test and the baseline.

Trying to spot concussions is a challenge for Woods, especially since all of NKU’s sports have limited hits to the head.

“It’s the soccer player that takes a header and is dazed and confused and you’re like ‘Is that a concussion? Is it not a concussion?’” Woods said. “That’s where an athletic trainer knowing a student athlete is important. If we suspect a concussion we are always going to air on the side of caution.

“Concussions are the only injury I dread having an athlete have because I can’t control it.”

Boos estimates there are only about 15 concussions a year from all of the sports combined. Even still, he tries to do some neck exercises with his student athletes to stabilize the head and prevent the head from moving around as much when hit.

Both Boos and Sanders agree that without football as a sanctioned sport at NKU, the school wouldn’t be able to justify trying to find technology to analyze brain injuries. Sanders notes that their isn’t definitive technology to treat and analyze concussions anyway.

“A lot of the technology is a little hoaxy,” Sanders said. “There’s nothing conclusive out there right now. If there was anything conclusive, they would be using it already.”