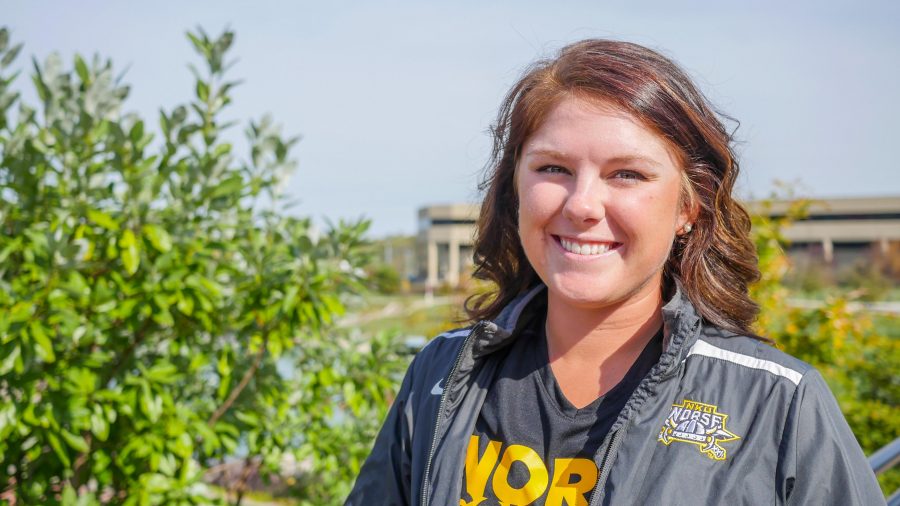 Ryleigh Waltz is a senior nursing major at NKU. She is also a member of the NKU golf team

When the cold November winds blow across the Tri-State, one NKU athlete trades in her golf clubs for scrubs.

“I love my decision to become a nurse,” Waltz said. “I actually work as a patient care assistant at St. Elizabeth and it’s something I have never regretted.”

When she wasn’t studying, Waltz and her teammates were breaking records on the golf course.

Like many student athletes, her days often start before sunrise and don’t wrap up till midnight. While the days are long, the nursing major values her experience at NKU.

“The upside is that I have met some incredible people and have made some great contacts,” Waltz said. “I will always have a huge network of people and reliable people to help me along the way of finding the right specialty of nursing that I would like, and also its honestly just a family here.”

When she first started as a patient care assistant, Waltz helped a patient work through the pain of hip replacement surgery.

“I had a patient a while ago that had a double hip replacement,” Waltz said. “So they had both hips replaced at the same time, which I’m sure you can imagine it is really difficult to walk and get around.”

Waltz said her job focuses on providing the patients with basic care needs and helping them regain mobility after surgery.

“The patients and I both learned a lot during that time, and it just goes to show how dependent they can be on you,” Waltz said. “They are human too, and you really just have to offer them the best care you can and put yourself in their shoes and make them feel the way you would want to feel.”

NKU recorded 298 on the final day of the tournament, breaking the previous school record of 301 for single round

Northern Kentucky also set a new 54-hole mark. The 904 posted during the Cardinal Classic broke the old record of 921 set two seasons ago at the Jackrabbit Invitational.

Waltz broke an individual school record, carding a 71 in a single round that propelled her to a 19th place finish.

“If they have to be at practice for two hours, she’ll get there early or stay late,” Landrum said. “It’s one of the reasons she is successful.”

Fellow senior Sarah Kellam has played with Waltz every year of her collegiate career, and they say the sport has helped them grow close.

“She is a competitor. She is somebody that I like having in my corner,” Kellam said. “I know that she is going to defend her teammates regardless. Whether it be on the golf course or outside of golf completely, I think that ferocity is a thing that she can benefit from. I think that it’ll take her far.”

Waltz sees Kellam as a sister rather than just a friend.

“Sarah and I have always had an interesting friendship,” Waltz said. “Since we are both serious competitors we haven’t always seen eye to eye, but we have always had each other’s backs regardless.”

Kellam said a bizarre incident at a tournament solidified their friendship.

“I was chipping and I didn’t notice where she was walking and I hit a chip and it wasn’t exactly the way I wanted it to go and I nailed her right in the leg,” Kellam said. “And yeah she was mad, she was real mad for like a week.”

“Yes, I was so mad, but it’s really funny to look back on,” Waltz said. “We played there this year and we were on that hole and I said, ‘Okay everyone, watch out, Sarah may hit you.’”

Trying to find her place

Waltz said she had actually never wanted to be a nurse.

She initially thought about pursuing a career in occupational or physical therapy. If not for Landrum’s flexibility, Waltz would not be at NKU.

“When I was looking into Northern Kentucky, I realized that coach was one of the only DI coaches that would allow me to be a nursing major and play golf,” Waltz said. “I started my nursing classes and I loved them, and I have never regretted my decision.”

Waltz is sad to be graduating, but she knows her NKU family will always be there.

“I feel that, even though I will be leaving here in a couple months I will always have a second family to really back myself up on,” Waltz said.