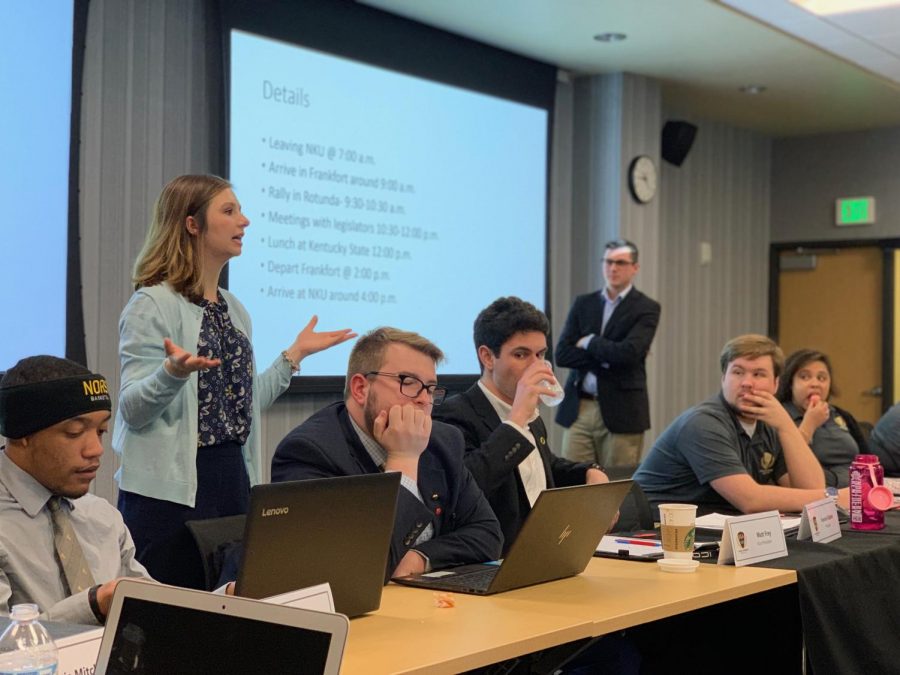 What you missed at SGA Feb. 11

On Feb. 11, SGA hosted the directors of university housing and business operations, who both gave presentations. SGA student senate was also excited to vote on a new resolution aimed at extending library hours.

Senators Noelle Brooks and Zachary Dichtl presented their resolution on library hours a second time during Monday’s  Student Government Association meeting. The proposed resolution would have the library extend their operating hours the week before school starts as well as before and during finals week. It also asks that the library keep the first floor open 24 hours a day, only allowing students to enter through the first floor outside of normal operating hours.

The proposal went through a final round of revisions, removing a revision from last weeks proposal that would have Einstein Bagels stay open with the library. SGA student senate unanimously approved the resolution—the final resolution will be presented to the library soon.

According to concept images, the new residence hall will be built between Kentucky Hall and Norse Hall. NKU plans on closing off the Norse Hall circle and creating a pedestrian quad, which will no longer be accessible by car. Construction is tentatively planned to start in September 2019 and is expected to be finished by mid-2021.

For the 2020 semester, students can expect no more than a $200 increase to the cost of housing for nine of the 17 NKU Housing options as the cost of utilities increase.

Changes were also made to  Housing’s internet bandwidth, doubling it from 1 gigabit to 2 gigabits. Berland stated that they also introduced a new package shaper that will give each person using WiFi an equal share of the bandwidth. These changes added $40,000 to housings annual budget and are included in the $650,000 NKU plans on investing in better campus internet infrastructure over the next five years.

“We want to make sure we’re offering a better value to NKU students—but if the demand curve shifts really really far and we’re underpriced, we’re going to lose money and not be able to afford to keep our buildings up to par,” Berland said.

The perks of parking

“Because we’re an auxiliary service, the state does not pay to build parking lots, garages, things of that nature. When we build a garage… we have to sell bonds, we have to take on debt to build that,” Meeks said.

Meeks explained that 70.5 percent of parking services revenue goes towards paying off the debt accrued by NKU when building parking lots and garages. The rest goes to paying the staff and general maintenance. Although this is sustainable, finding a balance between spending money on more spots and maintaining existing spots is crucial.

The last two years have seen an approximate 4 percent increase to the cost for parking passes, all of this revenue flowing back into parking services for the above-stated reasons.

Meeks elaborated on what he believes is a misconception about parking stating that NKU almost has too many spots available. The problem stems from students wanting to park in a specific lot or area—there should be a spot open, it just might be a walk across campus.