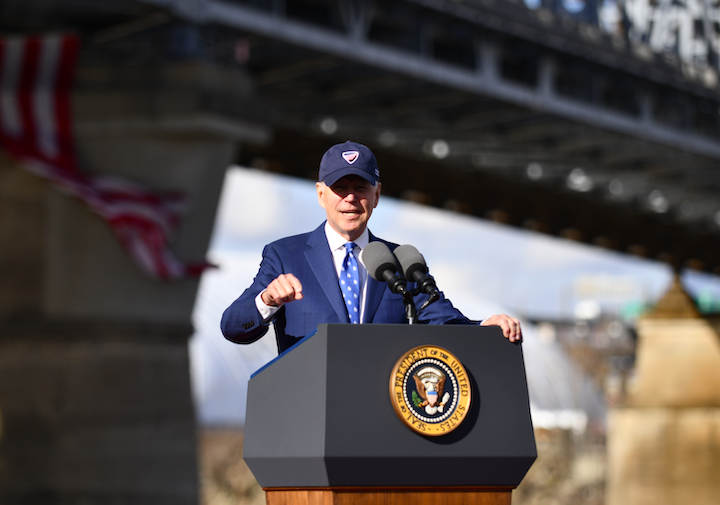 President Biden speaks during visit to Covington on Jan. 4, 2023.

Standing on a platform nestled underneath the Clay Wade Bailey Bridge on the banks of the Ohio River, a riverboat floating off to his side, President Joe Biden touted the $1.6 billion in federal funding for the Brent Spence Bridge Corridor Project, and the elbow grease it took to make it happen.

The return of American manufacturing, federal investment in infrastructure, restoring jobs and bipartisan cooperation were all themes of Biden’s speech. While he was speaking, semi-trucks whizzed in the background on the Brent Spence Bridge, illustrating the important economic relationship the bridge shares with the region.

“I wanted to start off the new year at this historic project here in Ohio and Kentucky with the bipartisan group of officials because I believe it sends an important message to the entire country. We can work together. We can get things done. We can move the nation forward,” Biden said.

“The bridge I think symbolizes coming together,” McConnell said. “It was something that both sides thought was important.”

The visit was significant to Northern Kentucky, not only because the visit was the culmination of years of work to secure funding for the Brent Spence Bridge, but also because Biden’s visit was the first time a sitting president had visited Covington since July 8, 1938. Then-President Franklin D. Roosevelt, who was joined by former Kentucky Gov. Happy Chandler and Sen. Alben Barkley, gave a speech at the Latonia Racetrack.

“I am glad to come to this beautiful spot today,” Roosevelt said. “I know about Latonia by reading the sporting pages of the papers. You live on a great river, the Ohio. And, by the way, the first steamboat that ever navigated this river was built and run by old Nicholas Roosevelt, my great grandfather’s cousin.”

Roosevelt’s visit was 25 years before the completion of construction for the Brent Spence Bridge in 1963. Today, the bridge carries around 3% of the United States yearly gross domestic product, a fact not lost on Portman.

Portman, a Cincinnati native and former US Representative for OH-2, said he had been working on funding for the Brent Spence Bridge for around 30 years.

“Over those 30 years, I spent a lot of time working on the Brent Spence Bridge. We had got some funding for some parts: Environmental Impact Statements, engineering, but we could never get the money for construction,” Portman said. “30 years is a long time to wait. I guess it took me retiring from the Senate to actually see it.”

Federal funding for the bridge came from the passing of the Infrastructure Investment and Jobs Act in Congress, which McConnell, Portman, Brown all voted for, and Biden ultimately signed into law. The $1.6 billion in federal grant money will go toward paying the estimated $3.3 to $3.8 billion price tag of the project.

Both the Kentucky Transportation Cabinet and the Ohio Department of Transportation collaborated on the planning for the project, having jointly applied for federal funding and outlined terms to move the project into the construction phase.

Construction for the project is scheduled to begin this year with its estimated completion being in 2029. The new bridge will not be tolled, something Covington Mayor Joe Meyer had publicly advocated for.

McConnell, Brown, Portman, Beshear, DeWine and Biden all touted how the project will improve the economy of the region and nation as a whole. Biden specifically brought up his support for the project’s construction to create more union jobs for people that are laborers, steelworkers, electricians and cement workers.

“Union jobs are good jobs that you can raise a family on, most don’t require a college degree,” Biden said. “All this involves making an investment in America, and America’s people and America’s future.”

Another point that was emphasized by some of the speakers was that the new bridge will improve overall safety for drivers. Biden brought up how the traffic bottleneck of the Brent Spence Bridge is the second worst in the country. When the bridge was first constructed, it was estimated the bridge could carry 80,000 vehicles every day. Last year, the bridge carried approximately double that.

“It’s the second most congested traffic bottleneck in the entire United States,” Biden said. “It doesn’t take an engineer to tell anyone in this neck of the woods that’s a recipe for dangerous accidents, delayed shipments and notorious gridlock.”

He cited the chemical fire that shut down the bridge in November 2020 as a safety event that caused negative downstream effects which impacted the entire region.

“The bridge was closed for weeks because of damage from the crash,” Biden said. “Lost revenues for local businesses, congestion on alternative routes. One company called it what everyone else felt: total chaos.”

Biden concluded his speech by saying he was optimistic about the future of America, and Congress’s ability to work together to pass legislation.

“Folks, let me tell you this. After years of politics being so divisive, we have bright spots across the country,” Biden said. “The Brent Spence Bridge is one of those.”